"Paris was a place where one wanted to walk, where to walk— flâner, as the French said— was practically a way of life. ('Ah! To wander over Paris!' wrote Honoré de Balzac. 'What an adorable and delectable existence is that! Flânerie is a form of science, it is the gastronomy of the eye.')" -- The Greater Journey: Americans in Paris (p. 31).

The Greater Journey: Americans in Paris by David McCullough 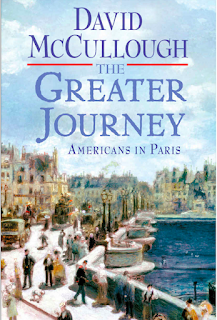 Recently, I've read three books about Paris. All three are especially interested in the topic of walking around Paris, for which the French have a special word: flâner.

David McCullough's The Greater Journey: Americans in Paris (published 2011) describes the experiences of a number of Americans there during the 19th century. Writers, painters, sculptors, musicians, medical students, and others all found enormous advantages in the cultural and scientific atmosphere of Paris; many remain famous for their accomplishments. One way or another, each one experienced Paris by a version of flânerie.

In the area of the arts, McCullough  especially describes the life of Augustus Saint-Gaudens, creator of many famous monuments that still stand in American cities. Saint-Gaudens found skilled helpers who could make cast bronze statues and perform other tasks that even in New York in the 19th century were unavailable.

There were many cultures in Paris. For example, medical Paris, writes McCullough, was "unmistakably different from fashionable Paris, or political Paris, intellectual Paris, financial Paris, or the visitor’s Paris, not to say the Paris pictured in the minds of so many who had never been there, or the Paris of the desperately poor." (p. 103). Over 700 medical students came to Paris from America before the Civil War to learn in the medical schools, advanced hospitals, and laboratories there. Paris offered far better educational facilities than the US, where most doctors learned from apprenticeships. As these now-professional doctors returned to the US, they improved medical practice at home and contributed to the development of American medical schools.

Interesting photo selections appear in several sections in the book. These include portraits of many of the American visitors (famous and less famous), as well as images of the Paris they experienced; for example the image of American minister to France Elihu Washburne included below.

McCullough often quotes the appreciative response of Americans to the fine dining available in Paris as well as to the fascination of the old and historic elements of the city and how the Americans reacted to history as it was being made. One historic occurrence covered in detail is the famous siege of Paris in 1870-1871. 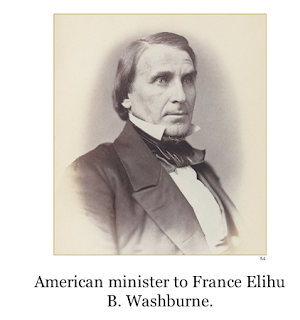 Elihu Washburne was especially noted for staying throughout the ordeal and helping other Americans to escape. Here's an account of his Christmas dinner in December 1870 and why Americans were able to experience the siege in a different way than their fellow victims:


"For his part, determined not to let Christmas go by unrecognized, he sacrificed two laying hens for a Christmas dinner at home for Wickham Hoffman, Dr. Johnston, Nathan Sheppard, and a few other American friends, in addition to Gratiot. The bill-of-fare included oyster soup, followed by sardines, roast chicken, corned beef and potatoes, tomatoes, cranberries, green corn, and green peas— all but the chicken from Washburne’s supply of canned goods.

"As Hoffman was to explain, the French were accustomed to shopping for fresh food day-to-day, not only because of their love of fresh food, but because so many lived in apartments with little if any room for stores. Americans liked being well stocked with canned goods, and consequently many Paris grocers had obligingly imported large quantities for the colonie américaine. With the greater part of the colonie having departed by the time the siege began, a quantity of canned fruits, vegetables, oysters, even lobsters, had remained on the market. 'The French knew nothing of these eatables till late in the siege, when they discovered their merits,' Hoffman wrote. 'In the meantime the Americans bought up nearly all there was at hand.'

"For dessert Washburne offered a selection of canned fruits, in addition to chocolates, of which there was still no shortage in Paris. Indeed, supplies of French chocolate, mustard, and wine appeared to be inexhaustible." (pp. 294-295).

McCullough described the continually worsening starvation faced by those who were isolated by the siege, including the consumption of dogs, cats (tastier than dogs!), zoo animals, and rats -- "Rat pâté was considered a delicacy," he wrote (p. 296).

I've enjoyed at least one other book by McCullough, and would recommend this to anyone with an interest in Paris, in American history, and in other related topics. 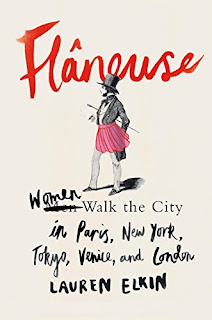 Several themes of McCullough's book are treated in a different way in Lauren Elkin's book Flâneuse: Women Walk the City in Paris, New York, Tokyo, Venice, and London (published 2016). The familiar topic of walking in a city is central to this book -- especially the famous topic of flânerie.


"From the French verb flâner, the flâneur, or ‘one who wanders aimlessly’, was born in the first half of the nineteenth century, in the glass-and-steel-covered passages of Paris. When Haussmann started slicing his bright boulevards through the dark uneven crusts of houses like knives through a city of cindered chèvre, the flâneur wandered those too, taking in the urban spectacle. A figure of masculine privilege and leisure, with time and money and no immediate responsibilities to claim his attention, the flâneur understands the city as few of its inhabitants do, for he has memorised it with his feet. ...

"The flâneur, attuned to the chords that vibrate throughout his city, knows without knowing." (pp. 3-4).

Flâneuse: Women Walk the City sometimes seems disorganized, as it shifts among several cities and moves around in the author's own experiences, her sense of place, and her idiosyncratic memories. She mentions many people I've read about -- Gertrude Stein, George Sand, Georges Perec, Alexandra David-Neel, Martha Gellhorn (for whom there's a whole chapter) -- all connected in somewhat unpredictable ways. For example, she says: "I seem to recall Georges Perec writing of one of his walks around the city that he can sense the moment when one neighbourhood gives way to the next without consulting the blue-plated street signs, and that this sets apart the Parisian from the visitor." (p. 222).

Another example of the jumpy and maybe messy organization of the book: there's a long chapter on the film maker Agnes Varda and how Elkin feels about her. I was especially interested in her description of Varda's interest in postcards: "We believe in the connection of postcard to place so deeply that the postcard becomes proof that we have been there." (p. 214).

It's a somewhat difficult book to follow, but with lots of nice detail!

The Other Paris by Luc Sante 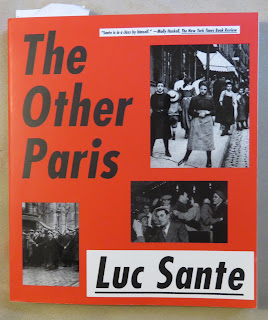 The Other Paris (published 2015) is a beautiful book: its topic is the Paris of the desperately poor, as mentioned in McCullough's list of multiple Paris cultures. Sante describes laborers, homeless people, sex workers and street walkers, people with unusual occupations, and a wide variety of eccentrics. He celebrates the many low-life areas that have been cleaned up, torn down, or totally erased in a long sequence of urban remodeling. Often lost, he shows, are the remnants of separate villages that eventually merged into the big urban space.

Like McCullough and Elkin, Sante is very interested in the special meaning of walking all over Paris -- he too finds the term flâneur very special. He writes:


"Paris is sufficiently compact that you can cross it with ease, in a few hours, and it has no grid, forestalling monotony. It virtually demands that you walk its length and breadth; once you get started, it's hard to stop." (p. 19)

One central Parisian focal point was Les Halles, the great food market that stood in central Paris until the late 1970s. I found the following description of specialized jobs there particularly amusing:


"Les Halles employed many hundreds, from the famous forts (strongmen...) to people with very specific occupations: egg candlers, builders of vegetable pyramids, fatteners of pigeons, fish stall display artists, breakers of mutton heads to extract the brains and the tongue (whose workplace was called a massacre), people who flattened ducks' breastbones with a rod to make them look plumper. There were many whose jobs involved some sort of counterfeiting: people who collected ham bones and jammed them into sundry cuts of meat, people who sprayed mouthfuls of fish oil on the surface of a bouillon to make it look fattier, people who painted turkey feet with varnish to disguise the progressive lightening in color that marks the days elapsed since death, and the confectioners of cocks' combs (which were used in ragouts or as trimming) from beef, mutton, or veal palates." (p. 101-102)

No doubt, Sante is somewhat eccentric in selecting his examples!

The book design of The Other Paris is quite interesting, with many illustrations. Sample pages: 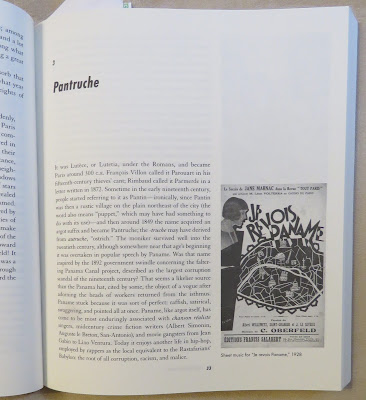 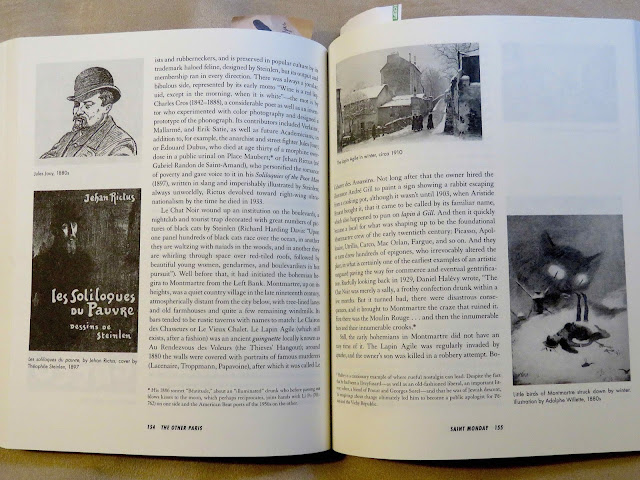 Most big cities are fun to walk in, but Paris is special, isn't it? So pretty, and so full of interesting and fun things to see. And when you tire of walking, there are tons of good places to stop and get a quick beverage or bite. All three books sound interesting -- thanks for the intros.

Thanks for these, Mae. They sound interesting, all of them but particularly the McCullough (which I have -- about a quarter of the way into it and put it down last year; this is good motivation to pick it up again) and the last one. I do like mcCullough's style -- I don't know why I stopped!