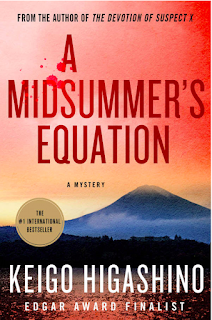 Keigo Higashino is "the most widely read author in Japan, with hundreds of millions of copies of his books sold worldwide and nearly twenty films and television series based on his work," according to the author page in my Kindle edition of A Midsummer's Equation. It's the fourth Higashino book I've read, and I continue to enjoy them for the multi-dimensional characters, the clever plots, and the local color and food descriptions. I must say, though, that this, the third available book in the Inspector Galileo series, doesn't have quite as surprising a plot as the first two did.

At the beginning, we meet Kyohei, a fifth-grade boy traveling alone on a train. His parents don't want to bother with him during summer vacation, so they're sending him to a tiny seaside resort where an aunt and uncle have a small hotel. The boy is a major character throughout the story, which in itself is an innovative device in a mystery novel.

Immediately, we find out what Kyohei has for lunch:


"The train lurched into motion. Kyohei opened his backpack and took out a plastic bag with his lunch inside. The rice balls wrapped in aluminum foil were still warm. A small Tupperware container held some fried chicken and grilled egg, both favorites of his. He drank some water out of a bottle and crammed one of the rice balls into his mouth. He could already see the ocean outside the window. There was a blue sky today, and sunlight glittered off the waves in the distance, beyond the white spray closer to shore." (A Midsummer's Equation: A Detective Galileo Mystery, p. 2)

Kyohei's slightly drunk father's promise to him was that the food would be good at his aunt and uncle's place: "The food’s great down there," his father said. "I’ll tell your aunt to stuff you full of fresh fish.” (p. 3).

In fact, the reader finds out quite a lot about the aunt's cooking both for hotel guests and for the family in the course of the novel. Upon Kyohei's arrival, he learns that two guests are staying at the hotel. One is a retired police officer who soon dies a mysterious death. The other is Manabu Yukawa, Assistant Professor of Physics, Tokyo Imperial University, whom we've met before -- he's known to the police, whom he often helps out in investigations, as Inspector Galileo. (p. 15)

The boy and the physicist establish a very nice relationship, as Yukawa takes charge of teaching the boy some science while he's also consulting for a mining company AND helping the police. Quite a character! I was especially amused at several scenes in the middle of the book where Yukawa and Kyohei eat dinner together at the hotel. Yukawa is always served a high-end fresh fish or sushi dinner, while Kyohei has the family meal such as meatloaf, egg over a ball of rice, or pork cutlets. Eventually Yukawa requests to have the family's dinner served to him instead of the food intended only for guests. The aunt's cooking turns out to provide a critical clue in Yukawa's solution of the mysterious death of the police officer and the events from the distant past that were associated with it (but no spoilers here).

Quite a number of police officers and detectives participate in the case of the retired policeman's death, including two competing and not-fully cooperating teams from the local resort town and Tokyo. Several of their discussions take place while they are eating at a variety of restaurants with intriguing Japanese special foods -- the combination of detecting and dining is extremely enjoyable to read!

A woman detective named Utsumi is responsible for quite a lot of the pavement-beating work that's needed to locate information about both victims and criminals. She and Kusanagi, one of the detectives, have one meeting at a restaurant with a special food that's pretty unusual for American readers:


"Utsumi’s favorite spot to grab a late dinner in Asakusa was right next to the Azuma Bridge, a little place on a narrow alleyway wedged in between the main road and the Sumida River. Lucky for Kusanagi, there was a parking lot just across the way.

The two sat down at a table fashioned from the cross-section of a large log. They both ordered Utsumi’s recommendation: the cow tongue platter.

"'Well, let’s hear it,' Kusanagi said, pulling an ashtray over and lighting a cigarette.

"Utsumi pulled a navy-colored notebook out of her shoulder bag."

She informs Kusanagi of her detecting efforts as they wait for their food.


"'I showed the picture to everyone I talked to, but nothing.' Kusanagi frowned. 'Yeah, that would’ve been too easy.'

"Their dinner arrived. Each one of them had seven pieces of cow tongue on a large tray, surrounded by a small bowl of grated yam, a bowl of boiled rice and barley, salad, and oxtail soup.

“This looks fantastic,” Kusanagi said, snuffing out his cigarette."

They discuss the discoveries she's made about the whereabouts of one of the important targets of their investigation and they eat their dinner:


"Kusanagi took a bite of his cow tongue and whistled. The combination of texture and taste was sublime. 'That is good. Dammit. Now I want a beer.'"

"'Where would he have gone, then? An Internet café?'

"Kusanagi nodded, pouring his grated yam over the rice and barley. 'That’s where all the drifters, young and old, wind up these days. Cheaper than budget places in Sanya, and they’ve got showers. Wow, this yam rice is amazing too.'

"'Okay,' Utsumi said, 'I’ll try the Internet cafés tomorrow, then. We still haven’t figured out why Tsukahara was looking for Senba in the first place, though.'"

"Kusanagi sipped his oxtail soup, gave a little sigh, and reached for his jacket on the chair next to him. He pulled his notebook out of the inner pocket and flipped through the pages." (p. 149-150)

On a different occasion, an interchange between Kusanagi and a witness took place at a restaurant run by the person he wanted to interview:


"Kusanagi stood outside a restaurant that served okonomiyaki pancakes a short walk from Azabu Juban Station. ... The tables all had hot plates in the middle so customers could cook their own okonomiyaki. ...

"'How many years were you at Bar Calvin?” Kusanagi asked. “Twelve, exactly. ...,” Muroi said, pouring the batter out on the hot plate in front of them. There was a loud sizzle as drops of oil began to dance on the plate.

As the detective questions the owner about the his long-ago experiences that will help to catch the perp, he also enjoys some of the special pancakes:


"Muroi paused to check how the okonomiyaki was coming along before leaning forward in his chair. 'Actually, I heard a rumor about that.'

"Muroi flipped one of the pancakes and said, 'It wasn’t just me who saw him. A few of the other guys at the bar were talking about it, wondering why he was so worked up.'"

The questioning and the pancake flipping alternate as the detective learns more and more about the people who interested him. He wraps up when he has all the info he needs:


"'Right,' Kusanagi said, putting away his notebook in his pocket. It was over twenty years ago, as it was. He hadn’t been expecting Muroi to even remember as much as he had.

"'All done— eat up while it’s hot,' Muroi said, spreading some rich, dark sauce on the okonomiyaki before sprinkling it with seaweed and bonito flakes and cutting it on top of the hot plate. 'Oh, almost forgot the beer.'

All things considered, I love the combination of suspense, gastronomy, police rivalries, and clever characters in this novel, though I don't feel the need to summarize the story, just to give these few hints about the way the book is constructed. I'm actually a little surprised that the author, so famous in Japan, isn't better known here.
Posted by Mae Travels at 4:52 PM

I'm crazy about Higashino's books, but didn't even know this one existed. It sounds fascinating, with the mystery and the food in Japan. I wish I could eat there in person. I'll add your review to the list on my blog, you're the second person to leave a link so hooray!

I've read one of his books which I enjoyed & my wife absolutely loved. Can't recall the title but I reviewed it a while ago.

A Bookish Way of Life said...

I've never heard of this author, so I'm glad you posted about this book. It sounds like something I would love! I'm jotting down the name right now, so I don't forget it. Thanks :)