Everyone Knows that Vegetables are Good For You!

Fruit and veggies! Every American knows that they are good for us. Guidelines tell us how many servings a day we should eat. On average, we don't do it. It's a perplexing subject for quite a few experts, whose research projects have been reported in several recent articles.

Author Julia Belluz in "4 fixes for the astonishing lack of vegetables in the American diet" reports on a recently published study that showed that between 1999 and 2012 in the US:


"while whole grain consumption went up and sugary drink consumption went down, there was no change in total fruits and vegetables consumed. (When Americans do eat vegetables, fully half of them are tomatoes and potatoes — often in the form of sugar-laden ketchup and greasy fries.)"

Belluz asks why people, especially poorer people, don't eat more vegetables. The benefits are especially important to those with diabetes and obesity -- which are more prevalent among poorer people. A big reason: at normal grocery store prices, they cost more per calorie than almost any other food. Here's a chart from her article illustrating that point: 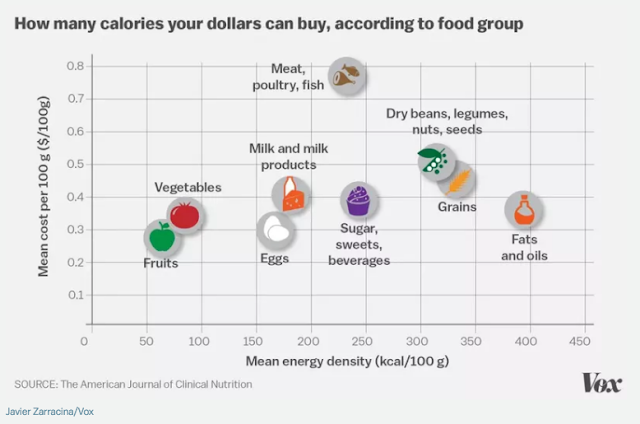 Quite a few reasons and several potential approaches to changing Americans' behavior are summarized in the article, including suggestions for subsidizing healthier foods instead of corn and soybeans, as well as for sexier marketing.

An article in the Atlantic a few months ago suggested another reason why richer people are more likely to actually enjoy and choose fruit and vegetables. "Why So Many Rich Kids Come to Enjoy the Taste of Healthier Foods: When children are introduced to something nutritious, they tend to reject it—which many parents don’t have room for in their budgets." by Joe Pinsker cites studies of how children form food preferences. In order to get to like something new -- say, broccoli! -- kids need to taste the new food between 8 and 15 times. And if they don't like it, it goes to waste, normally. This waste is beyond the budget of poorer families:


"Who can afford that sort of waste? Not parents with tight food budgets. A recently published study looking into the eating and shopping habits of both low-income and high-income parents suggests that the steep up-front cost of introducing foods to children is enough to deter a number of parents from trying. This cost-cutting decision may explain some of the differences between how rich and poor Americans eat."

The idea that childhood experience creates different food preferences is a challenge to conventional wisdom: "The reason that more-educated people have healthier diets may not be because they have more of an appreciation for the importance of a good diet, but because to an extent they’re following their palates. This explanation undoes a basic assumption about healthy eating—that for everyone, a better diet is a matter of overcoming the temptation of salty, sweet, and fatty foods."

A third article about the subject of eating vegetables: writer Catherine Saint Louis in the New York Times explores a different side of this question in "Food Banks Take On a Contributor to Diabetes: Themselves" (June 17, 2016). She writes:


"Many who depend on food pantries are not underfed, but are ... obese and diabetic, experts have found. In 2014, one-third of the 15.5 million households served by Feeding America, the nation’s largest hunger-relief organization, reported that a household member had diabetes.

"Inconsistent access to food worsens the disease, and so can the offerings at the pantries many low-income people must rely on. Now researchers have begun pursuing innovative new methods to address Type 2 diabetes among people who rely on food banks."

The article describes how some food banks are identifying people with diabetes and encouraging them to take home fresh fruit and vegetables that have been made available for the food bank patrons instead of (or in addition to) packaged and processed foods that are likely to make their problems worse.

Last year I visited two local organizations here in Ann Arbor that are working hard to make fruit and vegetables part of the food pantry staples, though I don't know that they are directly trying to make it more likely for people with diabetes to choose to eat them. I find the topic very interesting, and all the varied attempts to understand the sources of the problem and how it might be resolved seem very interesting to me.
Posted by Mae Travels at 3:12 PM

Interesting roundup of articles. Thanks.