Know’st thou the land where lemon-trees do bloom,
And oranges like gold in leafy gloom;
A gentle wind from deep blue heaven blows,
The myrtle thick, and high the laurel grows?*

This poem by J.W.von Goethe, published in 1795, expresses the longing of a person from the north for the beauties of Italy and the Mediterranean climate. Why did Goethe use citrus fruits as the exotic image of the far-off places being dreamed about?

Beginning in Classical Antiquity, lemons and oranges have taken on a variety of meanings in art, religion, literature, and cuisine. Citrus trees were raised for their beauty in climates where they couldn't bear much fruit. Orange or lemon juice was used as a sour or bitter condiment before sweet varieties of oranges were cultivated and eaten raw. Dishes like duck with oranges have been popular since the Renaissance.
Citrus history is full of mysteries. Just when did each variety of lemon, lime, shaddock, grapefruit, sweet orange, blood orange, bitter orange, navel orange, tangerine, clementine, manderin, satsuma, kumquat, bergamot, or citron appear, and who distributed the fruit and planted the trees? Each variety has its own history, beginning with the origins of citrus in the Himalayas at least 2,000 years ago. Some varieties date from these early times; others originated as recently as the late 19th century. Tracing the names used at different times in various languages helps to learn the history, but speculation is often the only response to such complex questions.

In northern climates, oranges and other citrus fruits were always scarce, and normally only available to the richest people. Palaces and chateaus often had an orangerie, where citrus could be grown out of season; the one at Versailles was particularly large. Royal gardeners grew citrus trees in large boxes, requiring huge numbers of laborers to care for them and move them indoors and out depending on the season.
In the Middle Ages and early Renaissance, oranges were associated visually with images of the Madonna,** and often appear in icons painted for churches or private use. Pious Jewish citrus merchants, beginning as early as Roman times, supplied citrons for the fall holiday of Succoth -- the citron had replaced the cedar cone (a similarly-shaped fruit) during around the first century before the common era. By the early modern era, these dealers were influential in creating markets for citrus, as well as supplying citrons for ritual use.

Orange groves around the Mediterranean in Spain, North Africa, Jaffa, and Italy constantly grew in economic importance. English crusaders first saw oranges when they embarked from their ships in Jaffa. Columbus brought orange trees to the Caribbean on one of his later voyages. Early modern travelers like Goethe dreamed of lemons and oranges in Italy while travelers in the 19th century saw them at exotic places like the Alhambra. By the beginning of the 20th century, oranges were sold at Christmas even for middle class buyers, and soon the railroads and cargo ships brought citrus to European and American cities year-around.

Orange groves in California and Florida developed as big agriculture starting in the late 19th century. Rail transport and cargo ships made it possible to deliver large quantities of citrus to American consumers in cities, and oranges became the miracle fruit for almost all classes, not just the well-off. Canned juice, then frozen juice, then fresh-pack juice were developed as essentially industrial products, with widespread advertising campaigns to create demand and convince the public of the great health benefits of drinking orange juice. Labor as always is an issue, with orange pickers working long hours for little pay.

My culinary history reading group discussed John McPhee's book about the history of oranges in Florida in the twentieth century, and I went back to read three other books about the history of oranges. Our group particularly admired John McPhee's style and his captivating way of portraying the many people in the orange growing business in Florida. His sketches of the lives of advertising men, grove owners, fruit pickers, and many others enlivened his description of the history of citrus in Florida. Though out of date (the book has not been revised since its publication in 1966) the book brings a lot of the business of citrus to life. We wish there would be an update to tell us about modern issues like labor challenges, water consumption, climate change, and changing demand from consumers of orange juice.

Booklist on which I based my very brief summary of millennia of citrus history:

*For anyone who is more knowledgeable in German than I am the original is:


**Below is the painting "Madonna of the Victories" by Mantegna, where the Virgin is surrounded by garlands of oranges and lemons. (Left, the painting; right, a detail of the garlands.) 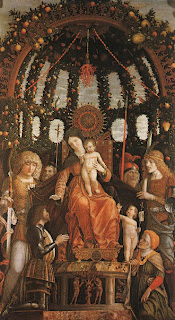 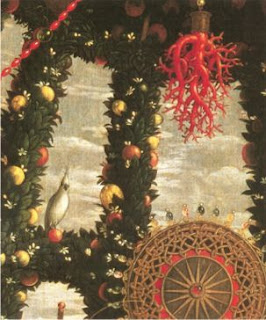 This is a fabulous series of posts. And I recognized that Lady with the Unicorn detail! I need to bookmark this series for future reference. Fascinating!