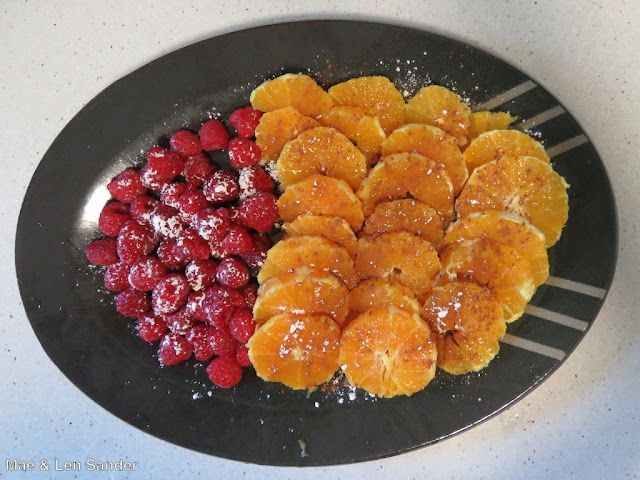 Paula Wolfert's recipes for desserts and pastry appear very challenging, for the most part. Though they sound fabulous, they demand both skill and time from the cook or baker. I now have two of her cookbooks, one on Moroccan cooking, one on the Southwest of France. Though I would love to taste her delicious-sounding desserts, I don't seem to have the courage to try making them.

The orange salad that I made today is much simpler than her other recipes. The ingredients are peeled & sliced oranges, cinnamon, powdered sugar, and a tiny bit of rose water. I made the dish as specified, but I included some raspberries because they looked very good. In fact, I do not know of any uses of raspberries in Moroccan cuisine, so I kept them somewhat separated. The recipe is from Couscous and Other Good Food From Morocco (originally published 1973; this edition 2001; recipe p. 82). 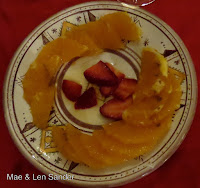 A very similar version of this dish was served in the Moroccan restaurant in Avignon, France, where we ate last April (shown at right), though it may have used orange-flower water rather than rose water. It included a few strawberries, which were in season then.

This was my first time ever using rose water, though I believe I have tasted it in North African and Middle Eastern dishes in restaurants. It has an incredibly intense and very rose-like aroma, and as I have read to do, I used it very sparingly. After we ate, I offered my guests each the opportunity to savor the aroma from the rose-water bottle.

Our dinner was very simple and ordinary though good. The main course was marinated beef and vegetables cooked on skewers over charcoal and served with potato salad: not at all Moroccan. I'll be exploring more recipes by Paula Wolfert, especially tagines -- though maybe not the pastry!
Posted by Mae Travels at 11:49 PM

What a pretty dessert, I love the vibrant colors. Sound s like a great dinner, marinated beef and all those lush veggies, count me in!

I've been a huge Paula Wofert fan for years. I have a variety of her cookbooks and I have cooked from all of them. Now I wonder if I've made any of her desserts.

I don't think I've heard of Wolfert, will have to check her out.
Oranges always remind me of Morocco.

I've really enjoyed the Moroccan food I've tried. I love the mix of spices and the touch of sweetness that seems to occur in so many of the savory dishes. I've always been a little intimidated by rose water as I know it needs a very light hand. I think the orange, cinnamon, and rose water combination sounds delicious!

It looks like a fabulous dinner and the fruit salad is lovely. I have a bottle each of rose water and orange blossom water from the India market here and I look for ways to use them. They do pair so well with fruit. ;-)

The raspberries may not be authentic Moroccan but the salad as presented is gorgeous. You have an artist's eye.

I'm not familiar with Paula's cookbooks, but enjoyed seeing this orange salad with rose water. I've used rose syrup before not rose water -- I imagine both should be used sparingly. Your dinner sounded yummy. :)

Simply stunning! Have a great week. Cheers from Carole's Chatter

It all looks fantastic!

I'll have to check out her cookbooks, from the library. The raspberries added just the needed touch of color and taste. I've never used rose water in cooking, but should give it a try.