"There was an old Périgord proverb about love being like food:
it changed with the time it spent cooking." (Fatal Pursuit, p. 32). 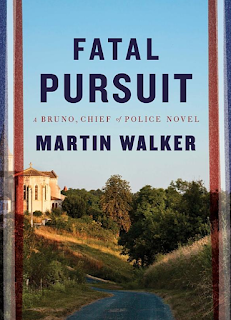 Fatal Pursuit is the latest book in the series "Bruno, Chief of Police" by Martin Walker. It was just published on Jun 21. I read it over the weekend and enjoyed every bit of it. I've read almost all the previous ones, and I'm surprised to realize that I've never blogged about them.

Bruno, the central figure of the series, loves life. He loves women: there's a new girlfriend every few books. The one in Fatal Pursuit is beautiful and passionate but not willing to make a commitment -- just like the ones in earlier books.

Bruno loves his dog and his horse and the countryside where he lives near the fictional town of St. Denis in the Perigord region of France. In every book, readers get to know more about his life and also about the permanent residents and their kids, the habitual summer/temporary residents, the local businesses, the dogs and horses, and everything else about St. Denis, which naturally has an immense murder rate to keep Bruno busy. You know, it's kind of like following the news from Lake Wobegone, only more exotic and violent.

Bruno loves to cook with the wonderful ingredients from local sources, including his own garden. He often visits open-air markets where he knows most of the farmers and producers (and sometimes gets them to come up with information about the murders he's solving). His observations of the local market offer various insights about the town and its cuisine:


"Bruno had noticed that most of them [the townspeople] shopped in the order in which they ate: first the olives stall and the organic bread, then the fish or the duck, then the fruit and vegetables and finally Stéphane’s cheeses. Even those he knew to be apartment dwellers paused at the flower stall, the last one before the bridge, picking up seedlings of herbs for their balconies and window boxes. Bruno moved through the stalls, shaking hands and kissing cheeks, tasting a ripe fig and then a fat black olive." (p. 234)

He also sees how the market changes over time, such as the introduction of Asian foods from the stall of Madame Vinh:


"the lumpia, the prawn curries and rendang beef, for all of which the people of St. Denis had developed a taste. Takeout containers were stacked beside the vast cauldron of pho soup heating on the portable gas stove. It would be empty by noon. In the decade that Bruno had been the town policeman, the usual radishes and cucumbers had been joined by mangoes and papayas, heirloom tomatoes and pomelos. Sausage rolls and Cornish pasties now stood beside the quiche Lorraine. But the cheese and the charcuterie stalls were still the most thronged." (pp. 234-235)


"... where the local farmers were invited on Saturday evenings in summer to sell their produce from stalls erected around the village square.... It had begun modestly with pâtés, salads and strawberries, foie gras and cheeses, a stall that grilled steaks and lamb chops and another selling wine by the bottle. It proved highly popular with the locals as well as tourists and quickly expanded to include haricots couennes, beans cooked with pork rind, as well as pommes frites, omelettes and soups. Then a local farm began offering snails in their shells with butter and garlic, and the mairie rebuilt the village’s old stone baking oven in the center of the square to produce fresh bread and pizzas." (p. 60)

Cooking is Bruno's passion, and he has strong opinions, like this one about one of the famous regional specialties:


"A real cassoulet has to contain stuffed neck of duck and some duck sausage, and I like to add some manchons of duck as well because my grandmother always put those small pieces of duck into hers. A cassoulet is always based on white beans with onions and tomatoes. It’s fine to add some ordinary pork sausage as well, as long as it’s been made with plenty of garlic, but without the duck it’s just a pale shadow of a true cassoulet. It also needs to cook very slowly, which is why I made it this morning and left it cooking in the haybox all day.” (p. 103)

In the course of just this one book, Bruno cooks or shares an incredible number of meals as well as morning coffee with croissants from the local bakery and a variety of carefully chosen wines. Often the details of firing the stove, preparing vegetables, and selecting ingredients are included. Some examples of what Bruno and his friends and helpers ate:


"Cooking a couple of quartered chickens with the carrots, onions and potatoes had made a plain but filling meal for his friends the previous evening. Now with some more vegetables and garlic and a pack of green lentils added, it would provide him and his dog with a hearty stew throughout the week." (p. 2)

"[A] vineyard dinner of soup, pâté, roast duck, cheese with salad and a piece of walnut tart. As much wine as they wanted was included in the price of their meal, all of it from the town vineyard." (p. 24)

"Bruno had planned to make dinner for his guests from Alsace, a simple meal featuring some of his homemade pâté, followed by his vegetable stew, cheese and salad, all accompanied by the big round tourte of country bread he’d picked up from the bakery that morning."(p. 59)

"They [Bruno & friends] were now so accustomed to preparing the meal that they fell automatically into their usual roles. Fabiola polished the wineglasses and set the table, and Miranda’s father decanted the wines he’d brought before starting to slice the big, circular tourte of fresh bread. The baron opened his cans of pâté, explaining that he’d brought one of venison and one of rabbit. Pamela went to the vegetable garden to pick lettuce for the salad while Bruno and Gilles took the big plastic bidons to the spring that burbled from the hillside to bring back some water." (p. 102)

"[Bruno} took a bottle of Château de Tiregand from his cellar. It went perfectly with the veal escalopes that Odette had prepared with morilles mushrooms that she and her daughter had picked in the woods that day. The first course had been oeufs mimosa from goose eggs, for which Martine had made the mayonnaise. And when Bruno had arrived, she had insisted on champagne anyway...." (Epilogue)

The pace of Fatal Pursuit is leisurely because the local color, copious meals, and various sub-plots are numerous, and though they somewhat advance the plot, they are also present for their own sake. I particularly enjoyed the subplot about Bruno saving the future of a teenage slacker by finding him a job working in a horse-riding school, and seeing that the bully who was tormenting him received a just punishment.

The central murder mystery of Fatal Pursuit involves international money-laundering and very valuable classic racing cars. Bruno's somewhat coerced participation in a fast car race is quite suspenseful. As in many of Walker's books, the nearly-forgotten effects of the local World War II resistance remain enormously important in the 21st century. In this book, Walker uses a true story of a lost Bugatti that disappeared in around 1941 in the region he writes about. All good fun to read!

Walker lives in the region where his stories take place, and clearly the taste reflected in the book is his own. In an autobiographical sketch, he identified himself as an active connoisseur of local foods of the Perigord -- "In 2013, I was made a chevalier of foie gras, in the confrerie of pate de Perigueux, and also an honorary Ambassador of the Perigord, which means I get to accompany the traveling exhibition of the Lascaux cave as it goes on display at museums around the world. I also help promote the wines of Bergerac at international wine fairs, and was chairman of the jury for this year's Prix Ragueneau, the international culinary prize." (amazon.com Fatal Pursuit page)
Posted by Mae Travels at 3:18 PM

Love this post, and this Martin Walker is in my TBR stack. Now I can't wait to read it!!

I've never heard of these books, but it definitely sounds like it's right up my alley with all the French culture and food thrown in. Murders I'm not so crazy about, but whatever keeps the plot moving.
Thanks for playing along with Dreaming of France. Here’s my Dreaming of France meme

Thanks for the recommendation. Bruno is new to me and I think he is a fellow I will need to discover. France, food, detective -- definitely everything I'm into! Are you doing Paris in July at Tamara's this year? I'm not sure I can, what with being gone so much. We'll see.