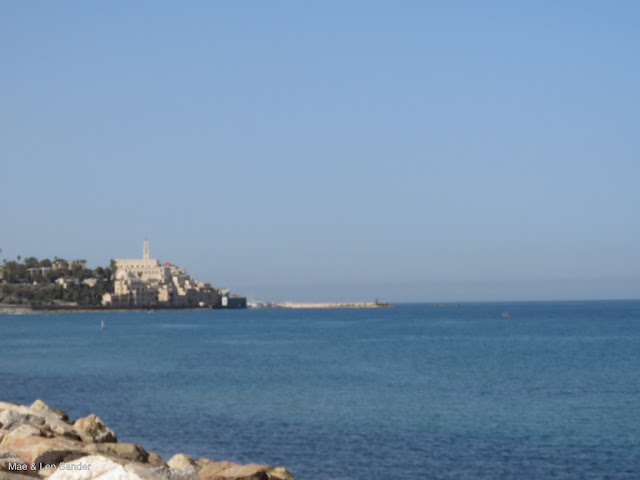 Jaffa stands on a hill overlooking the water. We could see the tower of its main church from quite far away -- it seemed to be beckoning to me all week. I thought the walk would be wonderful, and it was!

The city has been a port for around 3500 years, and is the oldest port in continuous operation in the entire world. The ancient Greek myth of Andromeda describes how she was chained to a rock just at the end of the long stone jetty in the photo -- it was identified as the location of this event by the ancient traveler Pausanius and other classical writers. Logically, it's called Andromeda's rock.

In Biblical times and during the Ottoman period, Jaffa was the major port for goods and people going to Jerusalem. The Bible mentions that Solomon's Temple used lumber from the Cedars of Lebanon that was imported through Jaffa. The port was used somewhat less in Roman times because the Romans built Caesarea as their port, but Caesarea fell into disuse and it's now just an archaeology site, while Jaffa is active even today. Tourists and immigrants on the way to Jerusalem in the Ottoman era frequently landed at Jaffa, though some, like Mark Twain in The Innocents Abroad came by a land route from Istanbul. 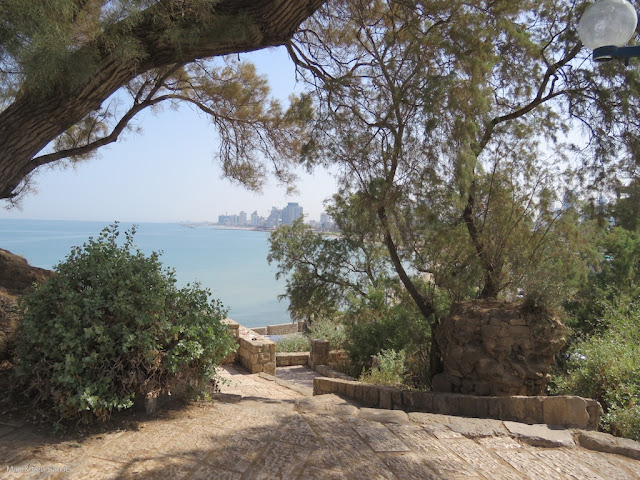 We walked back down from the higher part of the city and looked around a little. Then we took a taxi back to the hotel, so we aren't THAT intrepid. And we are now spending several days with a cousin in suburban Tel Aviv.
Posted by Mae Travels at 11:50 AM

The bird is very unique and interesting. We've always said we'd like to visit the Tel Aviv area. It looks gorgeous from your last couple of posts and the food looks delicious too. Good that it's peaceful now, but I hear the drivers are another story.

This area is gorgeous. But oh, that bird! How he steals my heart!