"The Family Mashber" by Der Nister 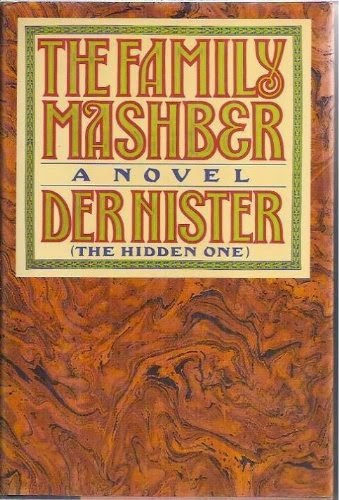 The Family Mashber by Der Nister was written after World War I, but describes the lives of the inhabitants of a town called N. in the Jewish Pale in the mid-to-late 19th century. The focus is Moshe Mashber and his family -- brothers, wife, daughters, sons-in-law, grandchildren, and associates and servants of the family.

I was amazed at the vividness of detail with which life in those days was described, and I enjoyed reading this quite long and rather obscure book. I was fascinated by the many hostilities among the Jewish inhabitants of the town, especially between the mainstream Jews and the members of the Bratslaver sect of Chassids. I've chosen some special quotations, especially about food and aromas, to illustrate the way the author uses detail to portray individuals and the atmosphere of the town.

Sholem the porter, a member of the Bratslaver sect, was characterized by what he could eat. Before becoming religious, he had been "quite capable of betting his fellow porters that he, Sholem, could eat up all the food prepared by Zakharye the tavern keeper for his customers. Everything down to the last morsel until the  table was empty: goose giblets and livers, goose crackling, knishes -- everything.... While the other porters stood around he  gobbled everything that was on Zakharye's display table. .... When he was asked what he wanted in the World to Come, [he] replied  that he wanted the green hill on the outskirts of town to turn into a loaf of bread, and the river that flowed nearby to turn into a stew so that he might dunk the bread into the stew." (p. 599)

On the eve of the New Year, Moshe Mashber went to the cemetery and then to the synagogue. The house was ready for the holiday: it "smelled of the holiday clothing the family had put on, and of the foods being readied for the table on which the candelabra would soon be set in preparation for the holiday candle-blessing that preceded the last meal of the year." (p. 281)

At a fair in the town where the Mashber family lived, peasants finished their business and went to taverns, and peasant women might buy a "brightly colored babushka, an apron, a dress, boots, and so on. ...in addition to those foods they brought with them from home -- bread and pork -- they eagerly sampled a variety of town goodies: loaves of partly white bread, for example; sometimes... a cluster of bagels hardened from being sun-warmed in the summer and by exposure to cold in the winter in those bakeries where they hung until they finally found their way to the fair.  Sometimes someone bought a bit of candy, or a herring, or a glass of kvass, or other town goodies. And they bought, too, the sorts of fruits that were not usually seen in their villages: especially watermelon, for example, whose sweet juices men, women and children sucked so avidly that their faces were damp and sticky up to the eyebrows." (p. 223)

And at the fair, "The air was laden with odors: the smell of coarse peasant clothing, hay, straw, grain, flax, honey and fruit. It sounded with the cries of those shouting their wares..." (p. 225)

Mikhalko the watchman's hut: "furnished only with a wooden cot, a chair and a table, was permeated with the smells of sweat, rye bread, dried herbs and coarse, cheap tobacco. ... A cheap lamp hung by wires from the ceiling illuminated a smoke-smudged icon in a corner of the room. On a shelf just under the light there were a couple of dried-out palm fronds left over from last year's Palm Sunday and a bottle of filthy gray water from a Twelfth Night celebration." (p. 154)

Inns and taverns have a particular aroma. One tavern, owned by a man named Sholem-Aron, was a gathering-place in the town of N. "The old building smelled of decay, of primordial darkness, smells that came from its old-fashioned apartments, from its three worn and half-buckling stories.... It smelled of antiquity. It had the sharp smell of soured old wine, of building and cellar damps and of air that had been enclosed for years." (p. 196) And beyond the town, where two characters wander at the end of the book: "The inn smelled of sourdough and stagnant well water, of chickens raised in the house who laid their eggs and hatched them under the stove." (p. 684)

The smells are so vividly described that I find the following quote, about a vicious man named Tsali, especially fascinating: "It made no difference [to Tsali] whose the money was, so long as it was obtainable. 'Because,' said Tsali, 'money has no smell.'" (p. 205)
Posted by Mae Travels at 4:33 PM

I will have to check this out as it sounds very interesting and descriptive. Obviously, love the food references! Thanks for the review.