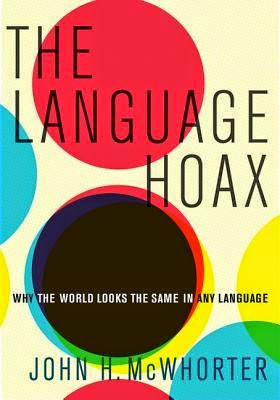 I have just read John McWorter's book The Language Hoax: Why the World Looks the Same in Any Language. I enjoy reading about language, and particularly enjoy books by angry linguists.
McWhorter isn't exactly angry, but he gets close sometimes, about the issue at the center of his book. In fact, the first thing he says is:


"This book is a manifesto. I will oppose an idea about language that took hold among certain academics starting in the 1930s, and of late has acquired an unseemly amount of influence over public discussion as well. This is the idea that people's languages channel the way they think and perceive the world." (p. vii)

McWhorter is particularly angry about the misuses of scholarly research in sensational or even just ordinary journalism. Often, he points out, research finds very subtle and essentially trivial results, but if these results resonate with popular culture, their significance is vastly overstated, even by supposedly responsible journalists.

Commonly repeated overstatements that McWhorter cites include the idea that speakers of languages where there is only one word for the color range from blue to green can't distinguish colors in that range. Or that languages with strong grammatical genders have a strong effect on ideas about real gender, or an exaggerated idea of the "maleness" or "femaleness" of objects of that gender. Research shows no such connection. One example is a language with almost no grammatical gender: common misconception about language and thought might expect the speakers to be very egalitarian about men and women, but in fact, their culture is rife with mistreatment of women.

One way he states his point is this: "Crucially, a connection between language and thought does exist. The problem is how that connection has percolated into public discussion." (p. xiv)

In order to try to capture a little of the sense of the book, I'm going to pick his examples of (what else?) food. McWhorter's mentions differences in the way various languages talk about eating. He uses them to demonstrate that many differences in various languages do not meet a "need," which would support a strong connection between language and thought, but arise for essentially random reasons, and do not in fact limit the speakers' ability to express ideas. He writes:


"In New Guinea, for instance, it is quite common for a language to have one word that covers both eat and drink (and sometimes also smoke). Yet what 'need' does this address? It is unlikely that anyone would propose that dozens of separate tribes on this massive island are actively uninterested in the differences between foods ... . Descriptions of such groups' take on food in fact regularly include a wide variety of foodstuffs and preparations, with feasting as a regular aspect of communal life.

"This then sheds light on what we might make of a superficially more auspicious situation. Navajo takes things to the opposite extreme: how you say eat depends on whether you are just eating in general or whether what you are eating is hard, soft, stringy, round, a bunch of little things, or meat. Future research could determine how the place of food differs in Native American cultures versus ones in New Guinea? Perhaps, but what do we make of the fact that an Aboriginal group across the water from New Guinea in Queensland, the Dyirbal, having lived lives over millennia that New Guineans would find thoroughly familiar, have three different eat verbs for eating fish, meat and vegetables? Or that an Amazonian group called the Jarawara, living lives also quite like those of New Guinea folk, say eat differently depending on whether you have to chew something a lot or a little, whether you have to spit out its seeds, or whether you have to suck on it?

"All of this is neat, but not in showing us anything about what people need in their language. A speculation about how something in a language 'must' reflect something essential in its speakers is incomplete without considering the distribution of that something in languages worldwide." (p. 45-46)