I have many Italian cookbooks, featuring regional cuisines, Italian-American foods, historical studies, and encyclopedic treatments of pasta and of Italian cooking in general, all in English. Today for Cookbook Wednesday I want to describe -- briefly! -- three cookbooks representing three vastly different eras of Italian food. 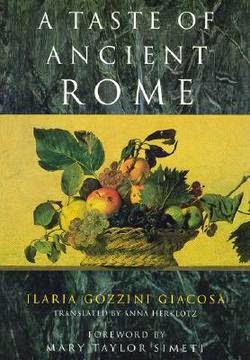 A Taste of Ancient Rome by Ilaria Gozzini Giacosa (1992), a book reconstructing the food of antiquity.

Was Roman food the prototype for the now-famous Mediterranean diet? Perhaps somewhat, says Giacosa, except that many elements of modern Italian cuisine use new-world products like  tomatoes, turkey, peppers, and polenta made from maize, as well as other more-recently introduced foods like eggplant, most citrus fruits, and even pasta. All these and more were absent in Roman times. Further, the very common Roman condiment called garum, a salty fermented fish sauce, hasn't retained its popularity.

Roman writers created quite a lot of material showing just what foods they ate, how they grew and prepared these foods, their styles of dining from simple meals to lavish banquets, and how Roman meals changed during 1000 years of history. Roman authors particularly important for their food information include "Cato, Columella, Apicius, Petronius, Martial, and Juvenal," according to Giacosa.  From these sources come the detailed food descriptions and reconstructions of recipes included in A Taste of Ancient Rome. 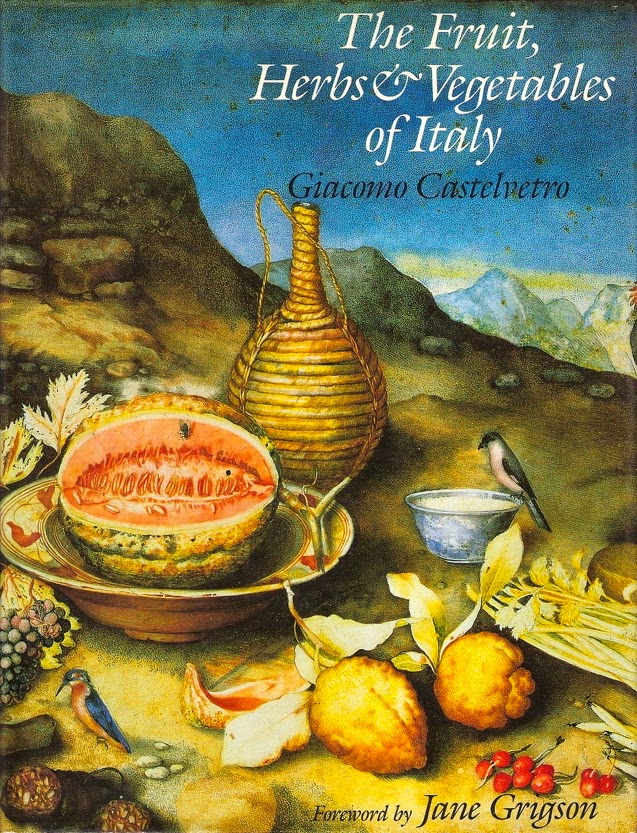 The Fruit, Herbs & Vegetables of Italy by Giacomo Castelvetro (1614), an impressively beautiful edition, translated by Gillian Riley from the original Latin.

This volume is full of reproductions of Renaissance paintings of food, markets, gardens, wine-makers, apothecary shops, and kitchen scenes, along with the author's descriptions of vegetables and suggestions for preparing them.

Castelvetro lived in England for a time, as well as in several other Italian and continental cities. He wrote this book towards the end of his life, to encourage English people to imitate the Italians, who valued eating fruits and vegetables. His approach seems close to many modern food writers. From the introduction by Riley:


"Castelvetro did not intend to write a recipe book. He must have known the works of Vicenzo Cervio, Bartolomeo Scappi and Giovanni Rosselli, describing the elaborate banquets of the courts of the Italian nobility, and felt passionately about a very different gastronomy.... With tact and good humor Castelvetro expounded his own ideas of luxury -- exquisitely fresh vegetables, simply prepared, using the finest ingredients.... He does give recipes when necessary, to explain how to use a particular fruit or vegetable, but the simple approach is what Castelvetro wanted to get across. The basic method for so many dishes could hardly be called a recipe: cook your vegetables simply in salted water and serve them tepid or cold with oil, salt and pepper and bitter orange or lemon juice." (p. 28) 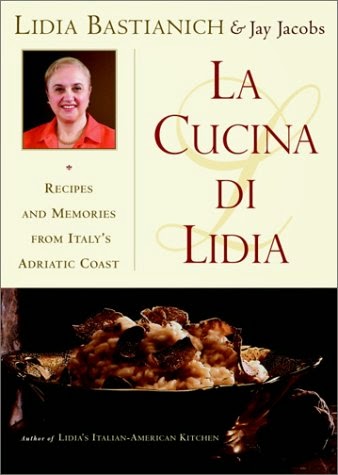 Although in her childhood, Lidia and her family became refugees from their native town in Yugoslavia near the Italian border, she shared some happy memories of their time in Trieste, Italy. She also described her transition to New York and her enjoyment of what I think it's ok to call the American Dream -- becoming a restaurateur, successful cookbook author, and eventually hosting TV shows.

Lidia's TV programs are broadcast on the very laid-back Create channel (or did appear there when I had that channel on my TV, don't know about now). In various episodes she demonstrated recipes, traveled through Italy, described her past and present experiences, and introduced various friends and members of her family. These included her quite elderly mother and her young grandchildren, who all joined her in the TV kitchen. I call her Lidia because these programs make me feel as if she's a friend!

Hi Mae!
What a nice collection of Italian cookbooks you have shared today. Although I have a few also, I must say not one of these, not even Lidia who is still on Create. (I catch it every once in a while late at night on my bedroom TV which for some reason gets different stations than the others:)

The Fruit, Herbs & Vegetables of Italy sounds like my kind of book. Uh oh, the one bad thing about Cookbook Wednesdays is how much my wish list has grown, lol...

Thank you so much for joining in Mae. It really is such fun to see so many different cookbooks.

The historic perspective on foods that everyone enjoys is so amazing, isn't it? I don't think I'd like garum at all, since I don't have a great taste for salt. These are interesting cookbooks, Mae.

I love Lidia's cookbook. I have found some fabulous recipes in her cookbooks.

It's interesting to compare how food has changed over the ages. Definitely some good reference material there.