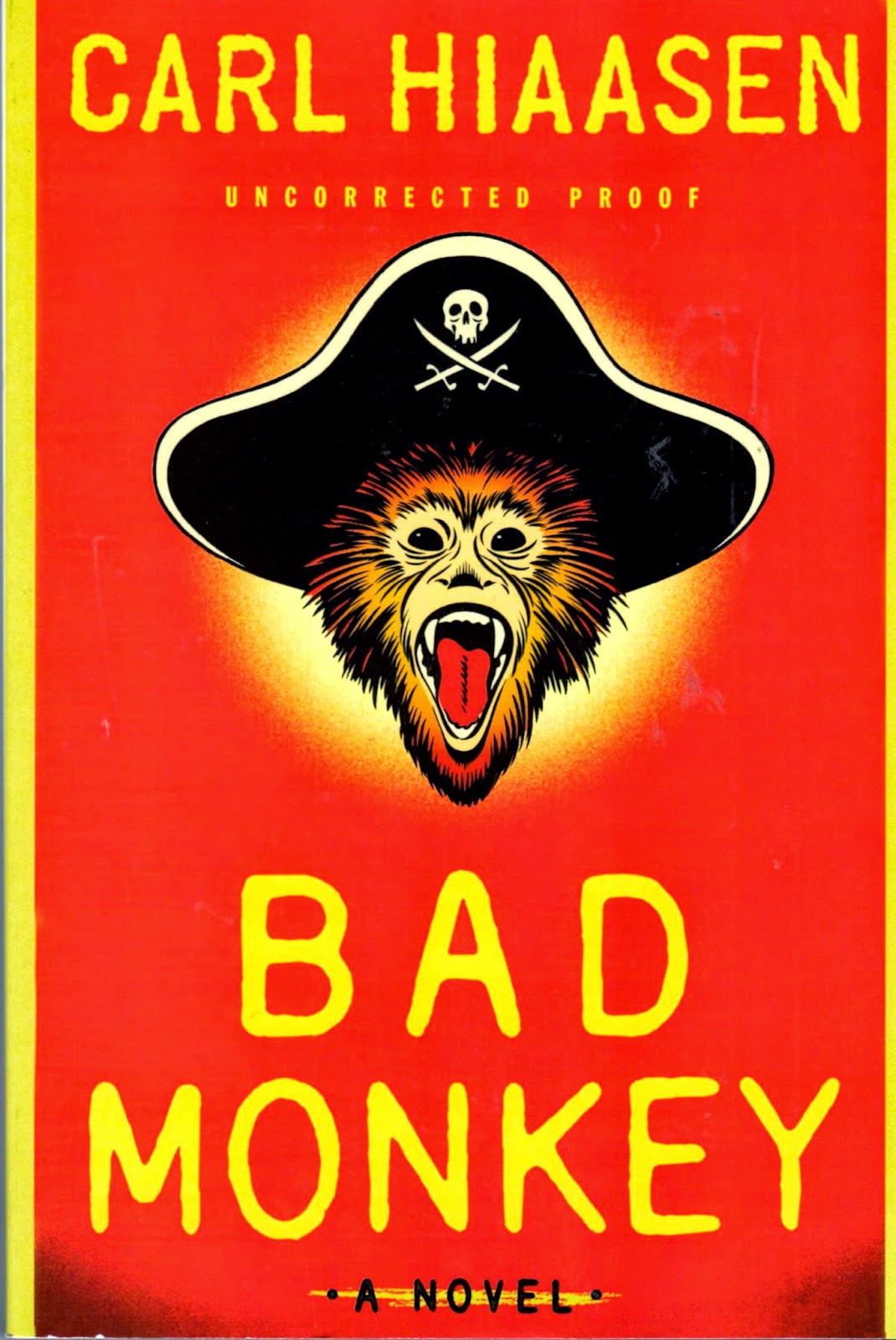 I am fascinated with the role of food in detective fiction, as I have often blogged about. Bad Monkey by Carl Hiaasen has some the most bizarre food themes of any detective story I've read. It's also a very amusing and reasonably suspenseful tale of some pleasingly eccentric characters.

Bad Monkey centers on Yancy, a disgraced detective in the Florida keys. He had misbehaved and therefore had been removed from the police force. In place of the inspector's job he loved, he's given "roach patrol." That is, he's assigned to be a restaurant inspector. Instead of savoring gourmet meals (as do fictional detectives like Nero Wolf, Spenser, or Brunetti), or eating macho meals (like V.I.Warshawski) or just eating frequently during investigations (like Elmore Leonard's characters), poor Yancy is so disgusted with food that he practically stops eating at all. Instead of enjoying the delicious seafood delicacies on offer throughout the Keys, he begins obsessing about the revolting conditions in restaurant kitchens where he had to count the roaches and smell the rot.


"Yancy received his first bribe offer at a tin-roofed seafood joint ... called Stoney's Crab Palace, where he had documented seventeen serious health violations, including mouse droppings, rat droppings, chicken droppings, a tick nursery, open vats of decomposing shrimp, lobsters dating back to the first Bush presidency and, on a tray of baked oysters, a soggy condom. ...

"Working for the Division of Hotels and Restaurants was the worst job he'd ever had. His appetite had disappeared the first morning, and in three weeks he'd lost eleven pounds. It was demoralizing to see how many ways food could be defiled. His first sighting of maggots put him off rice pudding forever. The opening of lobster season brought no joy ... all he thought about, day and night, was salmonella." (p. 36-37)

The central plot of Bad Monkey involves Yancy's efforts to identify the perp of a deeply bizarre murder and fraud case, and bring several villains to justice in strange and entertaining ways. For this he travels to Andros Island in the Bahamas, where he encounters several very colorful characters, particularly the monkey in the title. The monkey becomes addicted to deep-fried snacks, which make him more and more unhealthy. Another very very weird food themes.

Eventually a beautiful and talented girl friend manages to cook for Yancy and tempt him back to eating, but as his investigation unfolds, he keeps being forced to return to Stoney's and confront his wiggling, maggoty demons.
Posted by Mae Travels at 2:21 PM