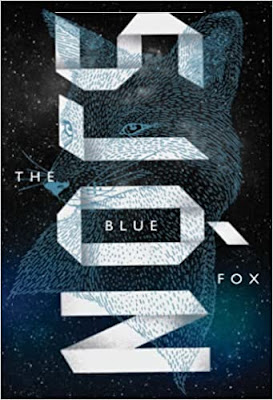 The Blue Fox is a short novel by Icelandic author Sjón, which was published in 2004, and translated into English in 2008. The events of the novel take place in 1883, in a rural and mountainous area in Iceland. The beginning of the novel to me seems very poetic:

“Blue foxes are so curiously like stones that itis a matter for wonder. When they lie beside them in winter there is no hope of telling them apart from the rocks themselves; indeed, they’re far trickier than white foxes , which always cast a shadow or look yellow against the snow.

“A blue vixen lies tight against her stone, letting the snow drift over her on the windward side. She turns her rump to the weather, curls up, and pokes her snout under her thigh, lowering her eyelids till there’s the merest hint of a pupil. And so she keeps an eye on the man who has not shifted since he took cover under the overhanging drift, here on the upper slopes of Asheimar, some eighteen hours ago. The snow has drifted and fallen over him until he resembles nothing so much as a hump of ruined wall.

“The creature must take care not to forget that the man is a hunter.” (The Blue Fox, p. 3)

Thus the author sets up the situation: a man hunting a fox. She’s a sly vixen who doesn’t want to be shot. For quite a while, the narrative concentrates on just the interior thoughts of man and fox. A determined contest, most fascinatingly portrayed.

Eventually, we get to the back-story of the man. We learn that this is a kind of a moral tale, in its special sort of prose-poetry. Indirectly, through the story of several other characters, we learn what kind of man this hunter has been in his life. We learn that he has been a clergyman, but an intolerant and problematic one. We learn this through the story of another man: one who is more sympathetic. And through a mentally disabled woman named ABBA, who has suffered quite a lot of abuse. Their stories are interesting, and they come up close to the hunter and his fate, which is what we finally learn. But here no spoilers. It’s the story of a blue fox — a special type of arctic fox whose coat does not turn white in winter, but remains dark.

It’s a short and thought-provoking book, and it’s really about a fox. I think. I’ve seen it classified as “fantasy” but that seems to me to miss the point. To me, it seems to be more of an allegory about good and evil, but I think it really doesn’t fit into any standard model: it’s original and very penetrating.

Reading The Blue Fox made me think of our visit last month to the Arctic Fox Center. This novel has multiple meanings, but on one level, it’s really about the Arctic Fox, a very special creature, that changes its color as the seasons change, and also depending on its habitat. Foxes that live on the shore are darker, foxes that live in the tundra or on the mountains are lighter, and many of the foxes become white in winter. Just a few remain a silvery-blue color.
The Arctic Fox Center documents the history of fox hunting in Iceland, which is not at all like British sports hunting on horseback! At the moment only farmers are allowed to shoot foxes, and only if the foxes are a danger to livestock. On the whole, Iceland is very protective of wildlife, and a large preserve where there are many wild foxes is nearby. 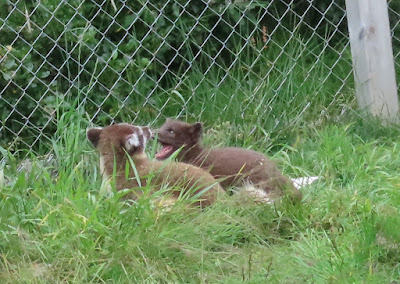 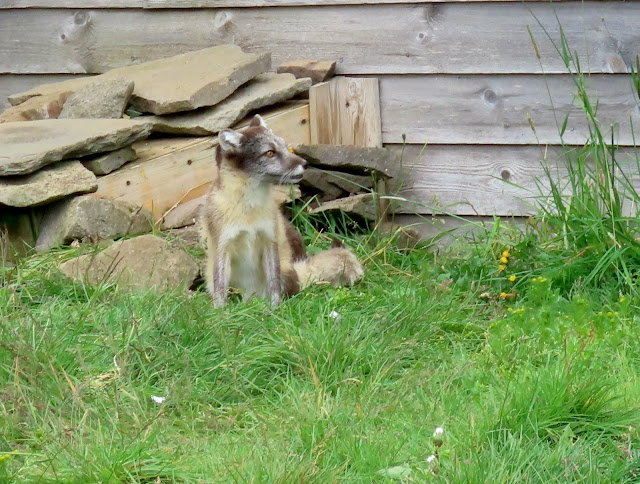 Arctic foxes are very special in Iceland. For one thing, they are the only real native terrestrial mammal. Reindeer were introduced; horses, sheep, etc. are domestic animals; and polar bears only appear accidentally when an ice floe brings them from Greenland. Marine mammals and birds are much more abundant.
In addition to being the center of the novel The Blue Fox, a fox is also very important in the novel Kalmann: the narrator of this novel is tracking a fox that he has named “Schwarzkopf, like the shampoo.” Kalmann explains: “He was a badly behaved fox, a young male, who had ventured right up to the houses looking for something to eat.” (Kalmann by Joachim Schmidt, p. 16)
Blog post and photos © 2022 mae sander
Posted by Mae Travels at 11:30 PM

They are nothing like the foxes we have seen in London. What did they eat before man settled there?

This book seems like a really good read. It has already captured my imagination
Many thanks for the review.

Your comment to Kwarkito intrigued me--- just as Arnaud (Kwarkito) always intrigues me. I decided I had to come see your blog. I'm glad I did!

Hello,
Great book review. The Arctic Fox Center looks like a great place to visit, I am glad to read Iceland is protective of the wildlife. I have never heard of the Blue Fox, the baby foxes are adorable. I have seen the Arctic Fox at a zoo. Thank you for linking up and sharing your post. Take care, have a happy weekend. PS, thank you for leaving me a comment.

That was a nice book review, but the real star of this post are those foxes and the fox center. So glad you shared this because I learned a bit about foxes I never knew. Beautiful photos, too, Mae.

This sounds like a book I would enjoy reading.

I have never seen a fox in real life. Sounds like a great book (but I have way too many and too little time).

What an interesting critter. We have foxes here in Florida but I've never seen one in the wild (except in NC). The books sound good too. Thanks for sharing.

I love foxes, scared of them, and wolves too, but love the idea of them in the wild.

Thank you for the tour of the center. You made the book so intriguing that I got a copy; thank you for that, also. I sort of wish there was a spoiler though, because I don't want to cry. :-( I'm reading "Fox and I" by Catherine Raven about a red fox the author bonded with in Montana (or Wyoming). It is poignant.

Wishing you good heatlh, laughter and love in your days,

A ShutterBug Explores,
aka (A Creative Harbor)

Nice review. I am always looking for reading material.
The foxes take the prize, though. What a great spot to visit.

Fascinating, thanks! I have had this one for too long on my TBR

Because of you I read the book - really enjoyed it - something different from my usual reading. I like that.

The whole concept of the Arctic fox is fascinating to me. I didn't realize it was native and love that it adapts its look to the seasons. All new!