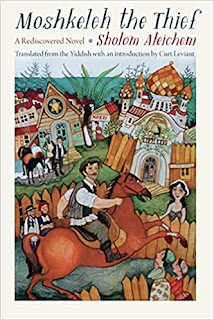 Moshkeleh Ganev wished that his fellow Jews in the village of Mazepevke would be more respectful of him, and call him Moshke, the way the non-Jewish residents did. He wished they would skip the word Ganev, which meant thief — even though being a thief was in fact how he made a living.
In a few short chapters, Moshkeleh and his fellow villagers are introduced: vivid and highly individual. The innkeeper and his very beautiful daughters, Moshkeleh’s fellow Jewish horse thieves and pickpockets, the very handsome visiting government official (not Jewish, of course), and Moshkeleh’s own father, also a petty criminal. Moshkeleh himself is a handsome and appealing man, but no girl would have him because of his profession. Then Moshkeleh saves the girl he secretly loves from converting and running away with the non-Jewish official. He does so in a resourceful and surprising way, as is always the case in stories by Sholom Aleichem.

The character Moshkeleh and the Ukrainian village Mazepevke reflect the humor and creativity of Sholom Aleichem, perhaps the most famous Yiddish author. He wrote the novella Moshkeleh the Thief in 1903, when it was published serially. Somehow, this story did not appear in the author’s collected works, and was recently translated into English for the first time. What fun to read it!

Who isn’t thinking about the current state of Ukraine right now, as the Ukrainians fight the invasion of their country by their much bigger neighbor Russia? My mother’s family came from a village in Ukraine, which of course I’ve always thought would have resembled the villages in Sholom Aleichem’s stories. I think my great grandmother even made bootleg liquor which was probably sold in a tavern like the one in the story. Sholem Aleichem created a vision of these villages, which have nothing at all to do with the current situation. We know why there were 1.5 million Jews in Ukraine in 1939 and today there are less than 10% as many. But Sholem Aleichem allows us to imagine what was once a world in itself.

You come up with the most interesting books.

I always enjoy reading about all the books you read Mae. You like such varied reading. And right now I too am curious how Ukraine and its supporters should move forward. Hopefully they will find a good solution to drive Putin back out of his illegally annexed territory. hugs-Erika

Sounds very interesting.
I´ll never get it. Unlike Muslims Jews never tried to force others into their way of living, why not leave them living their lifes in peace.
And "the Russians". My maternal family grew up in a village near Königsberg, which the Russians took and renamed it Kaliningrad, I am not allowed to visit.
And now that "the Russians" learn what Putin really is up to they rightfully flee. To force men who never had a gun in their hand to the front to fight people who never were a danger.
We live in such a crazy world.
Would it be different if women ruled?
German ex-Chancellor proofed a "no". She was the other extreme.

Have you ever visited Ukraine? My great, great, great grandfather was a horse thief in Romania. I've not visited but my parents have been to see the Schtetl that the family is from and the cemetery where they are buried.