"The recovery of peasant foods has overturned symbols and meanings: the 'poor' foods of the past have become the mark of new wealth." (Let the Meatballs Rest, p. 14)

"Because history is often called in as the guarantor of our identity, our 'traditions,' our 'roots,'  it is the duty of the historian to point out that history teaches us exactly the opposite. It shows us that alimentary traditions never remain the same but change with time, becoming modified as they come into contact with other traditions. Identities, traditions invent themselves, in the literal sense of the word: they find themselves, they construct themselves." (p. 157)

"'Whatever can be fried is good to eat,' assures a proverb common in various regions of Italy." (p. 49) 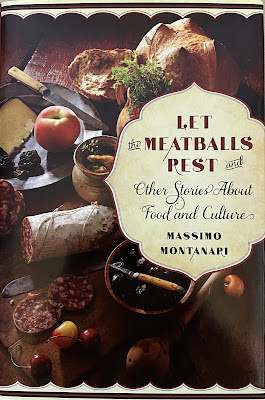 Let the Meatballs Rest and Other Stories about Food and Culture by Massimo Montanari is a highly amusing book that combines observations about Italian and sometimes other food cultures with lots of diverse historical facts. He begins with a story about meatballs:

"We were making meatballs in the kitchen one evening: boiled beef, cooked cardoons, parmesan, bread crumbs, two eggs, salt, pepper. Once the mixture was done, we shaped the meatballs and arranged them neatly on a plate. At that point, Marina advised: 'Now, before cooking them, let us leave them to rest for a few hours. That way they firm up and get thoroughly blended.'

"It occurred to me that letting meatballs rest is much like what happens in our minds when we work out an idea. Ideas are the result of experiences, encounters, reflections, suggestions: many 'ingredients' that come together and then turn into a new thought. Before that can happen, it is useful to let those ingredients rest, to give them time to settle, to become blended, to firm up. The resting of meatballs is like the resting of thoughts. After a while, they turn out better." (p. ix)

As it  happened, after reading Montanari's very amusing thoughts and ideas all day, I was cooking meatballs for dinner -- and I did indeed let them rest!

But wait! These aren't real meatballs, they are Impossible Meat Balls made from the mystery non-meat that tastes so much like actual beef that it's kind of uncanny. In fact, Impossible meat is made from soy protein concentrate and a number of other laboratory-type things that aren't found in a normal person's kitchen. There's no such thing as a perfect, a "real" meatball, in my world. I especially like Montanari's observation:

"I have always been diffident about any pretension of codification, standardization, uniformity: the 'true' recipe for meat sauce, the 'true dimensions for tagliatelle,' the 'true filling for tortellini.... There is too much ambiguity in that terrible adjective true that would brand as false any variation, any inventiveness, any departure from the rule." (p. 40)

Montanari's discussion of peas gives me an idea. I let this idea rest, and then had the following thoughts: Impossible meat to me is much better than Beyond Beef, which has pea protein instead of soy, so I was amused at one of Montanari's ideas about peas in Italian history.  He points out that  "patrician tables ... were  not averse to presenting dishes from the peasant tradition, but with suitable adjustments." (p. 21)
Peas with salt meat, for example, in a fifteenth-century recipe cited by Montanari, is similar to peasant cuisine -- and similar to the still-typical dish of peas with prosciutto. In the historic recipe, the peas also had cinnamon and sugar and grape juice. Another example is a recipe from the fourteenth century where peas were cooked with salt pork, and the juice was made into soup with onion, bread crumbs, spices, and herbs -- to be served in a hollowed-out loaf of bread.  The high-end diners liked their peas small and tender, and cooked the whole pod; peasants, on the other hand, "could not allow themselves to forego the volume and the nutrition of full-grown peas by 'wasting them' while they were still growing." The mature peas could be dried  and made into flour with other cereals or legumes, for which there were various recipes.
And so we get something related to our fake meat, don't we? And we are creating something special and expensive out of a pretty ordinary food, aren't we?
I really enjoyed Montanari's brief and interesting bits of food history and the messages he derives from them. "The primary concern of agricultural societies," he says, "has always been how to stave off hunger. At times it was a question of real famine caused by poor harvests. More often it was the fear of hunger that could appear at any moment." (p. 71) He explores how development of many food choices -- of biodiversity -- such as many types of grain, was a response to this need -- or to political circumstances.
In contrast, in modern times, Italian farmers in the 19th century were: "forced to cultivate corn for their own use because the entire wheat harvest was being shipped to urban markets: in Ireland, at the same time, farmers were eating nothing but potatoes, while choicer products were flowing into the markets of neighboring England... The monoculture of coffee, cacao, bananas, sugar cane replaced the variety of local cultures and exposed the farmers to hunger far more dramatic than had ever been experienced in the past." (p. 72)
His insight about the history of food is to observe "the extraordinary ability of humans to transform anxiety over survival into occasions of pleasure." (p. 90) So anxieties over eating meat (about health, animal welfare, humane treatment of workers, survival of the planet…) turn out to involve soy and pea protein made into fake meat? Or something. It’s a good book by a classic author.
Blog post © 2022 mae sander
Posted by Mae Travels at 6:53 AM

This sounds like a wonderful book! Terrific -- and amusing -- review of it. I haven't tried Impossible beef. I've tried Beyond Beef, which I didn't like (weird texture, although I tried the "crumbles" or something like that, and subsequently read that they're not nearly as good as the "ground meat." Anyway, must put this book on my list -- thanks.

Is the word cardoon American? Here we use the word artichokes and in Italian the word carciofi translates in English to artichokes. Sounds like an interesting book. I tried impossible meat and I must say, it's very tasty and your meatballs look great.

And another book that went on my kindle - your blog is dangerous ;-)

This sounds interesting, Mae. No wonder you are such a good cook -- you are a remarkable student!

Sounds like a great book. I love reading your posts. We have meat balls quite often. Both with ground beef, turkey and my own veggie meat. Have a nice day today.

ooh no not keen on the idea of fake meat. I made chicken balls the other day and put them in the fridge for 20 minutes tho the recipe didn't mention this. But I think it's a great idea!

Well it's said you need to let a steak rest so I suppose it makes sense for meatballs. I have not tried The Impossible brand yet but have had both the Beyond Sausage and Beyond beef.

I so enjoyed your book review and this comment, like most of mine, won't be worthy of the post (perhaps I need to let my thoughts rest a while longer, but if I did, I'd forget to come back to comment at all.) Practical thoughts I'm taking away: buy the Impossible meat. Make the meatballs, let them rest.

I rarely cook. Yet you made this book sound actually interesting! However, I friend who's a great cook and this may become his Christmas gift....
Terrie @ Bookshelf Journeys
https://www.bookshelfjourneys.com/post/sunday-post-16

This sounds like a book my mother-in-law might like, especially with the added bits of food history and comments the author makes. Although like Terrie, I rarely cook, I can appreciate the non-meat options since I am not a big meat eater.

What an interesting book. I like learning about the history of food (and history in general). It is also interesting to see what goes into meat that isn't meat!

Have a great weekend!

I haven't tried impossible meat. Not sure what brands we can get here. I am not sure how it would go down if I started bringing meat substitutes home!

I enjoy cooking, but thinking about it not so much.

It's probably just me, but I think I'd rather skip meat completely instead of eating fake meat. Still, I'm glad it worked well for you.

And the book leaves me with a lovely image...and perhaps I will let the meatballs rest for a little bit longer.