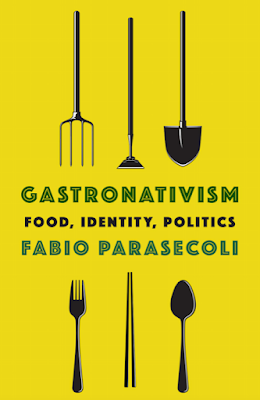 Gastronativism: Food, Identity, Politics by Fabio Parasecoli is a new book: publication date July 5, 2022, but available already. Based on the title, I expected it to be an interesting and comprehensive study. Unfortunately, I found the book to be about what I would consider to be a rather old subject, for which the author has coined a new word -- the book's title, gastronativism. He also coined other words like gastronationalism and gastrodiplomacy. But that doesn't mean, in my opinion, that he actually has much new to say.
Parasecoli's book is full of buzzwords like globalism, nationalism, colonialism neoliberalism, multiculturalism, elitism, patriarchy, hegemony, identity, tradition, cultural heritage, cultural capital, authenticity, appropriation, community, migrant culture, environmentalism, autonomy, national cuisines, ethnic cuisines, and many more. The author loves the word exclusionary. All this jargon makes for tedious reading.
Getting past the jargon, I found much of the book to describe the behavior of people who have the upper hand because of money or social privilege or political advantages, and who exploit others, have contempt for them, steal their land or livelihood, etc. In connection with such behavior, the word gastronativism refers to a sense of superiority among members of a such a group, a social class, or a national group and how they judge or put down the food ways and food choices of another group such as a racial or ethnic minority, an immigrant group, or a conquered people.

"Gastronativism tends to be exclusionary when it is based on the tangible and emotionally charged defense of the status quo against internal and external forces, trying to limit access to the perceived privileges that come with belonging to a community. White supremacy in the U.S., anti-immigrant movements in Italy, conservative identity politics in Poland, and Hindu hegemonic efforts in India find enemies not only outside of the country but also inside." (p. 21).

Thus strong communities have frequently forced their food ways on the weak, one way or another for centuries. This is not news. It's been discussed over and over. Recently, globalization has been creating another go-round of this trend, as first-world food corporations force their manufactured products on third-world and underclasses, and force out the foods that are traditionally grown and processed by the unlucky members of other societies: "When it is the focus of exclusionary gastronativism, food can become a symbol of national sovereignty, cultural purity, or social unity, depending on the context." (p. 37)

Parasecoli does make a good case for the cynicism of many politicians and other privileged people in exploiting food attitudes. Specifically,  these demagogues succeed in creating irrational support for political ventures through invoking food taboos, fears of multinational corporations, and fear of food insecurity. I would have appreciated it if he had made his examples more detailed, and curtailed some of the wordy generalizations.

Various examples of efforts to make native or traditional foods into tourist attractions provides another way to look at the relationship of privileged people (like tourists) to less privileged people (like natives) -- gastrotourism. It seems as if this would be the opposite of gastronativism, but the two abuses go hand in hand, in exploiting differences among cultures for the profit and even the amusement of the privileged.

Conversely, immigrant groups and colonial subjects have continually introduced new foods to societies and classes of people who were more powerful, while the underprivileged victims are often forced to give up their methods of cultivating food and the native foods of their culture.

"What is at stake here are not only matters of international trade, comparative advantage, or even economic protectionism. The political debates that food-related incidents provoked in Japan, Taiwan, and Italy suggest that those concerns are accompanied and supported by deeper fears regarding the survival of one’s community. If the nation is the immediate horizon for the perceived threat, its ultimate cause lies in something broader, less easy to understand, and definitely tougher to keep at bay: the unregulated dynamics of globalization, which, on the one hand, facilitate exports and is supposed to endure food security but, on the other, force countries to partly give up their protections, their internal policies, and their autonomy." (pp. 146-147).

Not really a new idea, but Parasecoli makes a big deal out of his observations of how this form of abuse has worked out in the past and how it goes along with other isms and class structures and modern efforts at food justice and respect for differences in food ways. Many of the specific examples are pretty well known, like the French contempt for people who eat couscous (even though the French eat it themselves) or the English people who hate curry (even though the English eat it themselves) and many other not very startling phenomena, including the UNESCO list of Intangible Cultural Heritage which "protects" such concepts as the Mediterranean diet.

The biggest example of conquerers adopting the food of conquered people, appropriating foods from disadvantaged people, and simultaneously changing the food ways of the conquered is far from new. It began around 500 years ago. Parasecoli writes: "The isolation between the Old and the New World came to an end in the late fifteenth century with the Columbian exchange: corn, tomatoes, beans, and peppers were adopted from Spain to China, while olives, grapes, wheat, and onions were brought to the Americas." (p. 77) Not a new idea at all -- the historian Alfred Crosby began using the term "Columbian Exchange" and documenting this history in the 1970s.

Here are some things I think the author missed or glossed over: he mentions fusion food, but doesn't say anything new about this much-discussed subject. He doesn't go into the way so-called traditional food is always changing, for example via the invention of new recipes that quickly seem to be a long-term part of traditional cuisine -- like tiramisu and ciabatta bread, both introduced in Italy in the second half of the 20th century. He is vague about the constant arguments about appropriation vs. honest adoption. He is also vague about trends of absorbing the food of the poor into the food of the rich (like polenta in American trendy restaurants). Feeding the victims of natural and human-caused disasters is currently a big endeavor in our global world. For example, José Andrés, whose efforts to provide sustenance that's culturally right are so effective in Haiti, Puerto Rico, and right now in Ukraine. But this isn't part of Parasecoli's story either. He loves to generalize vaguely, not to show how specifics support his ideas.

Mostly, I am very turned off by the pretentious jargon in which the book is written. Here's a passage from the book with my translation into normal English:

Quote from Gastronativism: "Culinary competence operates in four conceptually distinct but often overlapping dimensions: the personal, communal, collective, and institutional spheres of migrants’ social life. The personal dimension is the most immediate and idiosyncratic. Individuals find themselves at the juncture of necessity, external inputs, and their inner world of feelings, memories, desires, and instincts. Eating forces them to interact physically, emotionally, and cognitively with the new environment. Reactions may vary enormously in terms of involvement with foreign culinary practices, ranging from enthusiastic embrace and participative negotiation to active resistance—all the way to total refusal." (p. 164).

My translation: "When people move to a new country, they react in various predictable ways to the food of the new place. Many but not all of them learn to eat new foods."

Marion Nestle, whom I respect, mentioned that she would be interviewing the author of Gastronativism, which I took for a recommendation, so I bought it. Sadly, I'm disappointed in this book despite her endorsement. I haven't found any professional reviews, I guess the book is too new.

When something can be said simply, it should be said simply. When an author extensively uses academic jargon, I often feel the author is being pretentious. My opinion, anyway.

I hate it when I buy a book, new, full-priced, and it disappoints me. But it happens. I do better when I wait for it to come to my library.

That is a fair assessment. I've read a number of books like this, regurgitating old ideas with new nomenclature.

Wow! This is an excellent review on this book. I appreciate everything your wrote.

It's a complicated subject. I'm sorry the book disappointed.

I'd say you just wrote the first professional review. And your writing style is MUCH more professional than Parasecoli's. Always love your honesty -- thanks.

You do the most fabulous reviews, I have had many book regrets but fortunately more wins than losses. I just needed you in my life all these years to give your reviews and suggestions lol,, that’s a very valuable skill you have. 👍❤️

Hello Mae,
Your book reviews are always awesome. This is not my type of reading material,
I still appreciate your assessment and description. Have a great day!

I would not have persevered and read it all. Thank you for your review, and the time it took. I won't be adding this to my reading list, that's for sure.

I was impressed with your candid book review. I was hooked from the beginning when you started with the isms. One thing I can't seem to understand is Fusion food. I guess I need to learn more about the way two cultures fuse their foods into one.