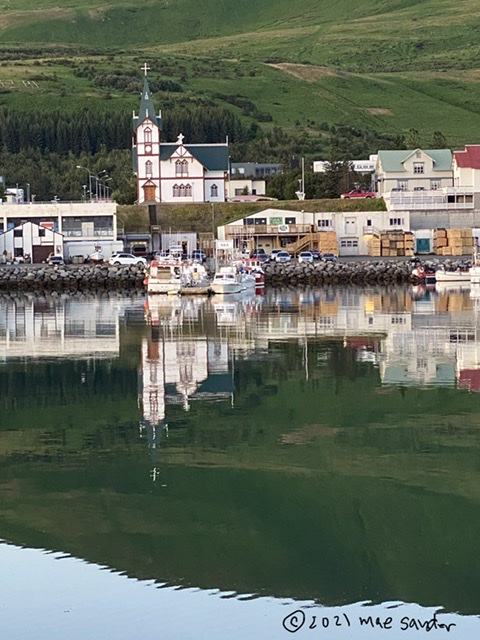 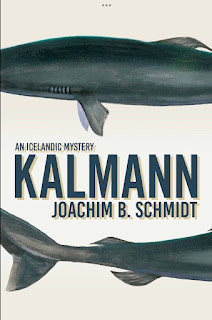 Iceland is a wonderful place. We toured there last summer, and hope to return when such travel is possible. So I was excited to hear about a new mystery novel named Kalmann by Joachim Schmidt. It’s set in a very small town called Raufarhöfn in the remote northeast of Iceland. The town is in “the snowy hinterland of the Melrakkaslétta.” (p. 5) It's a real town, though the events and characters are fiction.  We visited some places not extremely far from there, but not that town in particular.

Kalmann, a thirty-four-year-old man, is the narrator. He lives alone and loves to watch many American TV shows. When he goes out, he pins an American sheriff star on his coat, and he wears a cowboy hat and a holster in which there's a real gun (but most people think it's a toy). He quickly reveals that he has mental disabilities, but as he describes his life and in particular, his adventure with the police and a murder, he seems to have his own sort of intelligence and self-awareness.  For example he says:

"I have a superpower. I notice when people glance at one another, and I can read those glances. When I meet someone I’ve never met before, these kinds of glances always get exchanged. But I’ve learned to ignore them. Sometimes people look at me, stare at me in this completely backward way, and then I can’t help but grin, even though I don’t want to grin, but I do, and sometimes someone or other says: 'Why is he grinning like that?'” (p. 67).

By trade, Kalmann is a fisherman: he sets out baited lines and brings in Greenland sharks from very deep water. He's also a hunter, and closely observes the birds and animals in the rugged environment: "A hunter has an eye for these things. On the Melrakkaslétta, there were Arctic foxes and wild geese, falcons and snow grouse. Once, and only once, I saw a snowy owl." (p. 102).  I loved hearing about the birds he saw, some of which I've seen when in the far north. He writes about the snow grouse and the falcon:

"I would see snow grouse for sure, because at this time of year the cocks were still in their white winter plumage and easy to spot against the brown terrain. The females already had brown flecks in their feathering, camouflaging them against the falcons. The men sacrificed themselves for the women, so that at least their offspring would be protected. That’s the balance of nature. You can’t change it. That’s just how it is. Women and children first. The falcons’ favourite dish was snow grouse, and when there are only a few, there are fewer falcons, because then they have nothing to feed on. And if there are fewer falcons, there are more snow grouse. And when there are more snow grouse, there are more falcons. This example can most likely be applied to humans too, but at this moment I can’t think how." (p. 198).

After each successful catch of a shark, which doesn't happen often, Kalmann ages and treats the shark meat, which is inedible without processing. His secret cure for the shark meat makes it into an Icelandic delicacy called hákarl. The odor of this delicacy is very strong and even many of his fellow townspeople find it offensive, but he and a few others are quite fond of eating it. He claims to make the second-best hákarl in all of Iceland -- the best having been made by his grandfather.

Foods, including both Icelandic foods and imported foods and drinks, are of great interest to Kalmann; for example, his favorite drink is cola. And he likes "a hamburger with fries and Thousand Island dressing." (p. 108).  At a reception, he attended, he mentioned "the dried fish, the rye bread, the smoked lamb, the cake and the coffee," that were served to the guests. (p. 274).

When Kalmann describes the little he knows about his grandmother, who died before he was born, he says that she cooked only a few things: "broiled fish with potatoes, fish balls with potatoes, or lamb soup with carrots, turnips and potatoes." (p, 57) His grandfather is very much alive though he's lost his memory, and is now a patient in a nursing home in a neighboring town, and unable to do anything much at all. On a visit, Kalmann joins the residents for a meal:

"Then the lunch gong rang, and we went to eat, but Grandfather wasn’t hungry and silently pushed his plate away. I ate only the mashed potatoes, the sauce and the pork, but when it came to the vegetables my stomach was full to bursting. ... For dessert there was carrot cake. It was delicious. I ate Grandfather’s piece too."

Grandfather perks up when Kalmann brings out a treat:

"Once we were back in the room, I pulled out my little plastic container of hákarl. I always had a little folding knife with me. It had a good edge to it. I cut the hákarl into little pieces, and Grandfather watched me impatiently. Once I was done, he helped himself and hummed contentedly. 'It’s enough to bring tears to your eyes,' he sighed. I was so proud. ...

The taste and aroma of this favorite food trigger a moment of clarity in Grandfather’s mind. He asks about the fishing boat and Kalmann’s activities. And:

"Grandfather studied me. 'You’re really good at it,' he said. 'I always knew you would be.' I nodded and tried to suppress a grin. Grandfather grabbed my hand and squeezed it tightly, so much so that it almost hurt. 'Your shark is really delicious. The best shark in the whole of Iceland!'” (p. 118-120)

Later on, during an exciting moment in the police investigation into the mystery of the novel, Kalmann participates in an impromptu meeting of a few of the residents of Raufarhöfn (population less than 200). They have another Icelandic treat, which amused me because we sampled some when we were there.

"We waited impatiently until Siggi had finally arrived in the harbour. Sæmundur fetched a pitcher of coffee and fried kleinur doughnuts, so the atmosphere was great. A few more people came and joined us, for example the poet Bragi."

This paragraph also suggests how the author creates brief and amusing portraits of many townspeople in Raufarhöfn, as well as vivid depictions of the land, the sea, and the wildlife. I can't tell you very much about the wonderfully crafted murder mystery that is the center of this book, because I don't want to spoil the story in case you decide to read it. It's very much worth reading!

I'm sure many readers will be tempted to compare Kalmann to The Curious Incident of the Dog in the Night-Time by Mark Haddon, because the central characters of the two books have some disabilities in common. I suggest that Haddon's statement about his novel applies to both books. He says his work is "a novel about difference, about being an outsider, about seeing the world in a surprising and revealing way." But that it's not about a specific disorder. True also of Kalmann.

The main character of this mystery sounds like the sort of character I enjoy reading about. The setting and plot sound intriguing, too, though I often have trouble following the line of investigation in mysteries, and consequently I rarely read them.

Iceland might be a place I could happily live, if it weren't so cold.

I enjoyed reading your posts. I love learning something new.
www.rsrue.blogspot.com

Velva- Evening with a Sandwich said...

Iceland is on my list of places to visit. Love the feeling of reading a book and knowing the place of reference-this alone draws my attention when I am reading. The visual just comes alive.

Velva- Evening with a sandwich blog

Lovely review Mae and so nice to have your own memories linked to the book. Why is travel not possible right now?

Hello,
Thanks for sharing the review and book. I will see if my library has it available. Hubby and I enjoyed a trip to Iceland, it is a beautiful country.
Take care, enjoy your day!

Wow what a nice post and a great book review. Have a nice day today.

He definitely sounds like a character. It's kind of interesting, I don't think I've ever actually run into a story involving Iceland. Maybe I need to read more.

It's nice to be able to actually relate to a book review in a way that is meaningful to you. I was impressed bu the book review because you made it so very personal. So glad you had a chance to visit an area that was the setting of the book.

i would love to go to iceland. And I love nordic noir. I must get hold of this book. I read a fair bit of it; our swedish "daughter" who lived with us for 6 months said swedes and other scandi's are very sombre. she loved the friendly aussies she met!

Beautiful, Iceland seems liek such a beautiful and peaceful place to go to.
Laila
www.lailanblog.blogspot.com

This sounds really interesting. I liked Mark Hadden's novel, and I like that this book is a mystery. I also liked Iceland a lot when I visited in 2016, so this books sounds like it is a win-win in many ways. Thanks for sharing Mae. hugs-Erika

I have a food/mystery recommendation for you -- Camilla Trinchieri (sp) Tuscan mysteries -- a Murder in Chianti and A Bitter Taste of Murder. Nico Doyle is an American widower and ex-homicide detective who moves to his wife's home town in Italy where her sister (?) owns a restaurant where Nico helps out. The food descriptions are frequent -- and to die for! (And the plots are good, too!) I just finished the second and thought of you all the way through it! Better than Paola's cooking!

I would love to visit Iceland, but I am not sure I want to eat that shark dish!