My Kitchen in May: A Serene and Peaceful Retreat 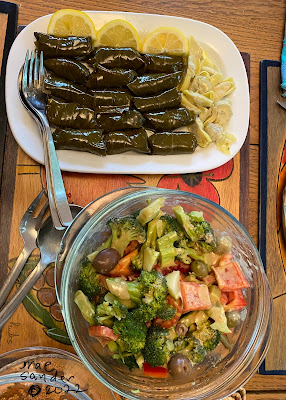 The World Is Not a Serene and Peaceful Place.

“These are the most difficult mornings: the sun rising after senseless acts of violence, shining on beds that weren’t slept in, that won’t be slept in again.

“There are 19 dead schoolchildren in Uvalde, Texas, as of this writing, along with two dead adults and the dead 18-year-old gunman. Several other children were injured, … including a 10-year-old in critical condition. The gunman also shot a 66-year-old woman whom authorities said was his grandmother. She, too, is in critical condition. …

“And I’m here to tell you what to cook right now?

“Food plays a central role in our reaction to tragedy, to death and grieving. It’s why casseroles appear on the doorsteps and countertops of those experiencing it, why we feel the urge to roast chickens or assemble lasagnas when the news is grim. Food is comfort of a sort, and fuel as well, for anger and sorrow alike. We cook to provide for those we love and for ourselves. In the activity itself we strive to find relief, strength, resolve.” (Source: promotional email from NYT cooking)

Sifton's newsletter, written the morning after the Texas massacre, struck a chord with me. I find it impossible to deal with the Republican tolerance for murder in the name of some totally outrageous right-wing theory of personal freedom (without responsibility, obviously). Reactions of Republican politicians seem harder to understand than the behavior of deeply disturbed psychopathic killers.
Our world is full of tragedies. Gun violence is a special US tragedy, a symptom of our national trend away from Democracy and towards a totalitarian state ruled by power hungry would-be oligarchs. Other tragedies, which affect far more innocent victims, are in my mind as well. Contemplating the death and destruction waged by the Russian war against Ukraine, the global power-seeking of Putin and his enablers, and the sheer cruelty of the invading Russian troops is unimaginable. The world is also face-to-face with a growing global famine, which I wrote about last week (blog post here). The human race is also facing environmental destruction, as signaled by terrible droughts on several continents, and other disruptions of normal climate patterns. And frantic parents are desperate for baby formula in the US.
And I’m here to tell you what’s happening in my kitchen?
Obviously, I kept cooking throughout the month, despite all the terrible stories in the newspapers. Maybe cooking does keep you sane, if you can keep from thinking about the victims of starvation. Whatever the case, I kept documenting my more experimental recipes. I try to keep posts not-too-boring, so I don't share photos of ordinary pasta dishes, tuna salads, or other run-of-the-mill foods that I make all the time.
From an interview with Yotam Ottolenghi who says that it's true that Russians and Ukrainians share many food traditions -- "But reality proves that food, by default, doesn’t create or engender peace. You can’t just solve conflict through food,” he said. “It’s just, unfortunately, in our world, it’s not really working.” ("Yotam Ottolenghi wants to talk to you")
I’m sharing my kitchen observations with like-minded bloggers who write about their kitchens each month at Sherry’s blog here: “In My Kitchen.” This post © 2022 mae sander.
Posted by Mae Travels at 11:02 AM

Croze hermitage is a délicious choice with lamb ! yes your kitchen seems to be a peaceful place (and your backyard too)

Hello,
Pretty capture of the Swan family. Your meals look delicious. I love Newman's Peach Salsa. Lamb is a meat I have not tried to make, it looks good grilled.
Take care, enjoy your day!

Peaceful serene and deeelicous! Beautiful photos, nothing as serene as swans floating on the water. They are fierce fighters but such elephant in their manner! so lovely, thank you for showing us this today, it’s hot in my kitchen today, our part of northern Ontario Canada is having a heat wave, mind you 70 is a heat wave to use lol👍❤️

Beautiful meal. We need to do whatever we need to keep ourselves sane in these trying times.

Given Yotam's upbringing, that statement has a lot of meaning. The gun tragedy in America this week resulted in so many comments that made me sick, such as one man claiming the school was negligent! My brother in law is Bulgarian and he taught me to eat my dolmades warmed. How do you eat yours?

well we don't eat lamb but i believe our abbatoir workers are treated just fine:-) Yes it's a scary old world atm. Famine, covid, war ... I think we need to keep cooking and feeding our loved ones. Love your backyard table. we often eat outside here in queensland even in winter. we are actually having a cold night of 8C tonight! thanks for being a part of IMK once again Mae.
cheers
sherry

oh yes how awful about all those dead children! I'm afraid i will never understand the penchant for guns and supposed 'freedom' over your way:(

I love getting peek into your kitchen and the outdoor dining as well. Well written article from Sam Sifton. No where else in the world are there so many school shootings and the number of gun violence incidents are off the chart.

Some blame video games,mental illness and more. Yet other countries have video games and their share of people with mental health issues. Something needs to be done.

Always enjoy a peek into your kitchen. It is a nice island of serenity in a world that's anything but. Alas. So much going on these days that I simply can't comprehend -- really sad.

Thank you Mae for your thoughts, so well expressed. I had read Sam Sifton's email of course and appreciated his as well. It's hard sometimes guilt inducing to just go on with our daily activities. But we must. For me, that includes just blogging away at the good things in my daily life, because unlike you I can't do a good (or original) job of expressing sorrow, anger, worry.... I'm glad you can. (And I hope your words are also read by some people who are not already in complete agreement and perhaps they will help them to think clearly. )

Food and the act of preparing it can be comforting in a time when the world is going insane. I can't understand how these Republicans keep getting reelected, when at least 85% of the country wants background checks and red flag laws.

Nice to see your kitchen from above. Really a lovely and compact space. Nice how you eat in different places, which I'm sure alleviates boredom.

Love your food and kitchen - and eating outside, oh, we are far away from that, weather-wise.
But the weirdest really is that I read in blogs about what happened - the shooting was not in our news...

There are times, and these times seem to be increasing, when it feels terrible to live in Texas.

We need to hear what is happening in your kitchen as much as we need to hear about the tragedies in Uvalde and other places in the world. Normalcy helps keep us sane -- and we need our sanity to cope with the rest of the awful things.


I have to say your pic of the lamb looks so good I am going to try to get some on the dinner menu for tonight!