"Her unhappiness at that moment ... was more than the unhappiness of leaving a place that seemed familiar for one that seemed strange; it was the pain of leaving the place where her accent and her looks, her worn suit and her diamond rings could still command a trace of respect; it was the pain of parting from one class and going into another, and it was doubly painful because it was a parting that would never be completed." (The Stories of John Cheever, p. 230)

"He was followed by the grand piano, the poodles, the Book-of-the-Month Club membership, and the crusty Irish maid." (p. 224).

"She was always talking about money. It was worse than eating your peas off a knife." (p. 786) 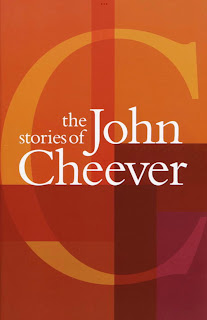 Class is everything in the stories I've been reading: finally, I'm getting around to reading John Cheever (1912-1982). I might have liked his writing at some time in the past, but I don't particularly like it now. His characters are amazingly vivid, but I find them predictable as well, with their concentration on upscale New York. If there's a lower-class person, he probably works as an elevator operator or a doorman in a fancy apartment building, and defines himself in relation to the rich old ladies and aspiring youngish men who ride his elevator or have him call their taxis. If there's a woman, she usually defines herself by the men she loves, especially by her husband and his aspirations, or maybe by her kids. Women in the stories who express dissatisfaction with their lives are described with condescension and disdain.

Why did I buy the prize-winning collection of more than 60 Cheever stories (over 800 pages)? I admit it was because it was on amazon's list of VERY CHEAP books: $2.99 and no doubt cheap because it wasn't selling. Usually when I go for one of these sale books, I'm glad I did, but this time I'm not sure. How many not-very-happy but very smug couples living in elegant (but maybe declining) circumstances with a maid who lives in the basement or over the garage, old silver, ancestors, and lots of pretensions do I need to know about? Not very many. How many people for whom “the shimmer and the smell, the peculiar force of money, the promise of it, had an untoward influence on their lives.” (p. 140) How many dilemmas that are never quite resolved because they never can be, so how many stories that seem unfinished?

Some of the stories are exceptions, For example, there are one are two somewhat paranormal stories, like  "The Enormous Radio" (p. 49) where a woman's radio broadcasts from her neighbors' apartments so she knows about marital quarrels, wife beatings, and other elements of desperation. Or the more famous one called "The Swimmer." But these have the same characters; that is, privileged Easterners who wish they were richer or happier or would prefer to live in Westchester.

Cheever at the New Yorker

Critics seem to agree that Cheever's work exemplifies -- and in fact created -- "the New Yorker story." That meant a lot in the mid-20th century. Now I feel this genre is very dated. The New Yorker could be incredibly snobby! I have admired this style for ages, but reading Cheever makes me reconsider my admiration for what's really a technical skill. Depth? Not really.

“It was ... in the fifties that ‘the New Yorker story’ emerged, quite suddenly, as a distinct literary genus. What made a story New Yorker was its carefully wrought, many-comma’d prose; its long passages of physical description, the precision and the sobriety of which created a kind of negative emotional space, a suggestion of feeling without the naming of it; its well-educated white characters, who could be found experiencing the melancholies of affluence, the doldrums of suburban marriage, or the thrill or the desolation of adultery; and, above all, its signature style of ending, which was either elegantly oblique or frustratingly coy, depending on your taste. Outside the offices of The New Yorker, its fiction editors were rumored to routinely delete the final paragraph of any story accepted for publication.” (Jonathan Franzen, "The Birth of 'The New Yorker Story," The New Yorker, October 27, 2015)

I know that old New England Money and Protestant upbringings weren't the only thing in the New Yorker: they also published I.B.Singer's stories of the Jews of Poland before the war and in New York, the adolescent angst of J.D.Salinger, Philip Roth's stories, and many works by people of other ethnicities. But somehow Cheever defined the style, and described an ideal New York of rich sophisticates and slightly nonconformist immigrants from lesser states (say, Ohio or Illinois).

Maybe a definition of the Cheever New York is illustrated by one character's thoughts:  “the shared apartment in the Village, the illicit relationship, the Friday-night train to a country house—was what he had imagined life in New York to be, and he was intensely happy.” (p. 122) Or by the beginning of "The Swimmer," one of his most famous stories: "It was one of those midsummer Sundays when everyone sits around saying, 'I drank too much last night.'" (p. 776).

Cheever's Protestants seem more dated and now stereotyped even than Roth's Jews. To me. Now. They are exactly the people that I DIDN’T want to be like when I grew up, whenever that was. I still don’t want to be like that if I ever do grow up. I find them annoying or boring or entitled or snobbish or grasping. Sometimes all of those. The husbands work in New York offices and join their wives in rural vacation homes each weekend of summer. Whole families drink much too much (boringly, there's an alcoholic or two in almost every story). Cheever creates men with frustrated ambitions, wives who love jewelry and want fur coats, children who are in danger from their parents’ excesses, successful single women who hook up with losers. Cheever could get you into these people's heads, but is that where you want to be?

Cheever Was Famous and Admired

Out of the huge number of stories in the volume I bought, I read around half of them. That’s enough Cheever for now. This blog post © 2022 by mae sander, with the cover images from the book and magazines.

You crack me up. How can you pass up a $2.99 book. LOL I do like your review and the feeling you have about it. Have a nice evening.

At least you didn't pay a lot for the books. They sound very condescending. I recently purchased a book set but didn't finish the second of 29 it was so badly written and after reading the first chapter of the third one, I've given up on the entire set. I'm glad the New York I experienced in the eighties was not like that.

Hello,
Amazon does offer some great deals on the ebooks. I enjoy your book reviews and I like the magazine covers. Thanks for sharing. Take care, have a great day and a happy weekend!

I've never read Cheever either. MAYBE NYorker stories -- maybe. But probably not. Rick is more into the fiction than I am and I'm not a fan of short stories. At this point in life, it's too short to read what I don't want to!

I remember Cheever being popular in the 1970s. He was definitely a product of his time. I like him better when I read a story every so often. I passed my paperback short story collection on some years ago.

My mom and dad grew up during the Depression followed by WWII, so stories of their rough childhoods, one in the country and one in the city, were the background of my childhood.

Reading Cheever was startling to me because his characters hadn't experienced the life traumas my parents had seemingly, but they still weren't happy. They obsessed over all the little things they didn't have.

No, these are not people I wanted to know, though the adult culture around me held them up as something to aspire to become.

Thanks everyone for the comments. @Deb Nance: my parents were also victims of the Depression. They never read the New Yorker! I would have reacted like you did but I never read Cheever's stories until now, so my dislike is less intense, but real.

Yeah I can imagine many of Cheever's stories feel dated now. I have not read Cheever but perhaps those stories aren't where my mind is now, which doesnt mean he isn't a great writer and I shouldn't at some point try his writing.