"Birds: Spiritual Messengers of the Skies"

"Birds are cherished among many cultures worldwide. The presence and well-being of birds reflects the health of the environment; they share every ecosystem with us, playing the role of hunter and prey, pollinators, scavengers, and dispersers of seeds. Feeding the spirit, they signify strength, courage and freedom. As our companions—birds inspire us to think beyond our own confinement and limitations. With some 10,000 species of birds in the world, they are among the best adapted animals on Earth, dating back to the time of the dinosaurs."
(source: New Mexico Audubon Society) 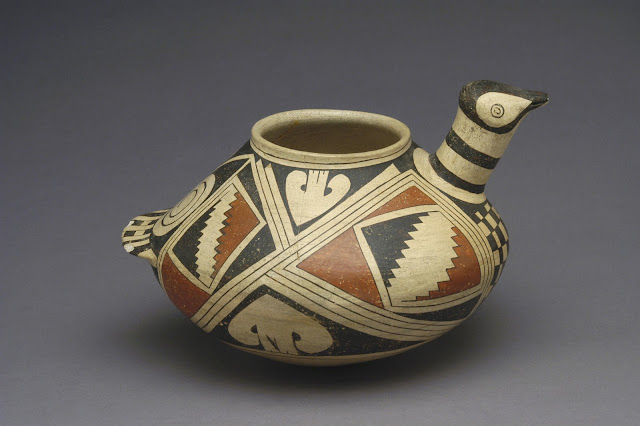 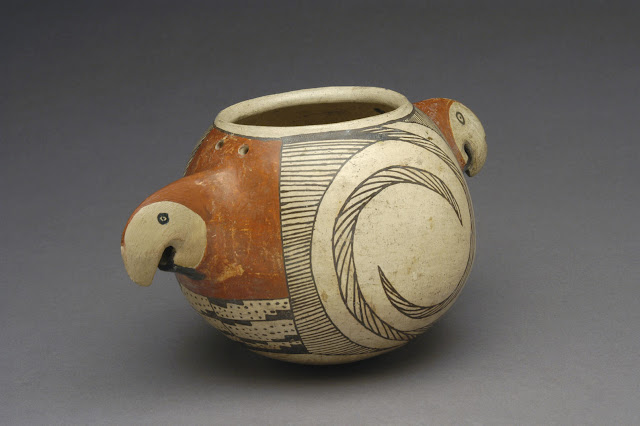 Birds are beautiful, and I love to see them in the woods and fields where they live. Our trip west during most of last month mainly was a birding trip, though we always try to add in some art. Our trip to the Museum of Indian Arts and Culture in Santa Fe was a double bonus because the Center for New Mexico Archaeology, which is part of the museum, featured the role of birds in native art and culture. The two photos above show some of the bird pottery that was in this very enlightening exhibit.

"This yearlong exhibit, 'Birds: Spiritual Messengers of the Skies' discusses the importance of birds to Native American culture both in the past and present, including the importance of birds as a resource for tools, feathers and food. The study of birds in archaeology is also included in this exhibit." (source: New Mexico Audubon Society)

I was fascinated by many of the facts presented in the exhibition, which had many examples of historic art works that included bird imagery. Real birds such as ducks, hummingbirds, owls, and songbirds are depicted in both prehistoric and contemporary pottery designs, as well as legendary birds like the thunderbird. I learned that the tribes of the region, prior to European contact, kept two domesticated birds: turkeys, which were native to most of Central and North America, and macaws, which were native to areas much further south, but were traded among all the tribes of the region. I think the second image above shows two macaws.

While we were in Santa Fe, we visited our favorite Indian art store, Andrea Fisher Fine Pottery. I found many bird-themed pots on the Andrea Fisher website, and on other commercial websites selling Indian pottery. Other Indian art forms, such as jewelry and weavings, also depict birds, but I've selected some images that show specific birds that we also enjoyed seeing during our birding expeditions.

The title of your blog post made me think of the novel, I heard the owl call my name.

Hello,
Beautiful pottery, I love all the bird themed artwork. The Roadrunner is a favorite, the owls are cute. I like the Quail too. Take care, enjoy your day!

Beautiful! I like the style of the museum, too.

These are fabulous Mae.

Very neat! Thank you for sharing all those photos. I really liked the red pot with the spiral design (Maybe an Eagle by Glendora Daubs).

I've been there. Santa Fe & all it shows in its Native art is a treasure. Thanks for sharing all about the importance of birds. It's migration time! I love that owl family!

Such beautiful pottery!!! And your opening quote says it all. Birds are fascinating creatures; like you, I love watching for them whenever possible.

Beautiful poetry. I have some on my shelves that were my Grandmothers. Some Maria pottery too. What a fabulous museum. Have a great day today.

The photos are lovely. Thank you for sharing them!

Loving the unique styles. They might have all started as clay and the wings of a bird, but they each bring so much more to the collection.

Thank you for sharing this art. Those quail are fabulous.

Hello Mae,
The Museum of Indian Arts and Culture does look wonderful. The pottery is beautiful and I love all the birds. Thank you for sharing your trip and for linking up your post. Take care, enjoy your day and happy weekend.

In my mind, there's a reason that pottery and poetry are so close in spelling and rhythm. (I even wrote a poem about that once.) Thanks for flying in with these birds, Mae!

The pottery is so beautiful and each one a work of art. I lived up in that area for a few years and loved it!

Santa Fe is on my list of places to visit - the desert and the arts.

I'm looking forward to the birds this spring and summer. We have Birding Week going on right now when warblers are heading north over Lake Erie to Canada.

Hello. Interesting post and photos. Thank you for sharing.

I was in Santa Fe recently but missed this museum. I'd love to return to see it! Such amazing and distinctive designs on these pots.

I'd love to see this museum. This pottery is amazing. Thanks for sharing it.

Your post is a good example of 'seizing the clay'. ;)

Have a good week ahead.

Interesting! Have a great week!

It's amazing to me that you were able to find so many pieces of art that represented various birds you saw on this trip. What a great place to visit, and what a wonderful trip!

These are beautiful artifacts!

What beautiful pieces you found!