A New-Old Mystery Novel from Japan

"Let it be a lesson to us all that even good intentions can lead to great tragedy if not executed with the utmost care."  -- Seishu Yokomizo, The Inugami Curse p. 10. 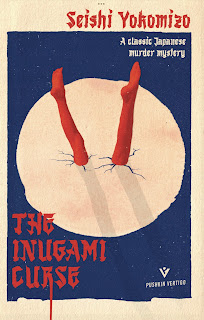 Seishi Yokomizo (1902–81), author of The Inugami Curse, was a famous and much-loved Japanese mystery writer, according to the biography accompanying the recently re-published novel.

What I find highly interesting about the novel is its setting in a small rural city in Japan immediately following World War II. Two central characters are just-returning soldiers who were part of the Japanese troops in Burma, and who suffered greatly. They are shocked to find new attitudes of defeat and conciliation instead of the spirit that prevailed before: "pride and sense of responsibility had supposedly been ingrained in all Japanese people before the war." (p. 313).  I've read very little about this era, which must be very uncomfortable to remember. Interestingly, while the effects of bombardments and destruction of the war are mentioned, there is no reference whatsoever to American occupiers.

The plot  of The Inugami Curse is very involved, with an unusually large number of characters, both victims and suspects, as well as a quirky detective brought in before even the first murder occurs. Private Detective Kosuke Kindaichi is baffled by the events throughout most of the novel, but works it all out in the end. The ten members of the Inugami family — along with a few individuals from connected families — are mourning the family founder, a rich industrialist who made a fortune in silk manufacturing. The elderly Inugami leaves a puzzling and contentious will to dispose of his large industrial holdings to his very complicated family, including three daughters each by a different mistress.

The will gives every one of them a motive to do away with at least some of their close relatives. Wow! Let the killing begin, and so it does, with plenty of suspense and torment.

Many very Japanese details make The Inugami Curse fun to read. For example, three symbols: an ax, a chrysanthemum, and a koto (Japanese zither) represent the family and its founder's identity and become important clues in the murders. Kabuki and Noh dramas are often mentioned. And the name Inugami itself means a type of supernatural dog in Japanese folklore, suggesting the mysterious origins of the founder, who started life as a wandering orphan. This meaning looms over the increasingly accursed family.
Beautiful descriptions of the landscape and the weather contrast with the constant sense of foreboding and the grizzly details of the murder victims; for example:

"The autumn had grown deep in this mountainous region, and a pleasant breeze swept shimmering over the azure-green surface of the lake. It was high noon, and across the way, the autumn sun glittered on the stained glass windows of the Inugamis’ European-style villa. Everything was peaceful, a moment caught in a painted landscape. Yet, as he gazed at the enormous building on the lake, Kindaichi could not help but feel a chill run up his spine." (p. 48).

The Japanese mystery novel traditions in the twentieth century owe much to the classic traditions of English mystery stories, including those that take place in lavish country houses similar to the one in this novel. Seishi Yokomizo was one of the founders of this tradition. I was a bit surprised that one feature of British novels -- the use of food and meals as a way to advance the story and characters -- was missing here. The members of the family never eat a meal together: they are too hostile to one another. And the detective isn't big on meals either. There are only brief mentions like these, showing the indifference of the detective to food (not at all like Poirot!) --

"A car from the Inugami estate arrived not long after Furudate’s phone call, so Kindaichi wolfed down his bowl of rice and hurried outside." (p. 96).

"'Chief Tachibana, Mr. Furudate, Mr. Kindaichi, I have some food prepared for you in another room, so please help yourselves.' ... Guided by the maid, the three men retreated to another room. They had just finished eating when two detectives, soaked to the skin, came bustling in. They were two of the men who had gone to find the missing boat." (p. 122).

The Inugami Curse, also called The Inugami Clan, was  originally published serially in Japan in around 1950, published in book form in 1972, and translated into English in 2007 or maybe earlier. It's also been made into a film (IMDB link), and Detective Kosuke Kindaichi -- who appears in many other novels by Seishi Yokomizo -- has been in a variety of TV shows in Japan. For a detailed book review see this post at Pretty Sinister Books: https://prettysinister.blogspot.com/2011/11/inugami-clan-seishi-yokomizo.html

I always think of you when I read a book and food is detailed. Thank you for the review.

Hello,
I do love reading the mysteries. Thanks for the review.
Take care, have a great day!

It sounds like a book that immerses you in the time and culture. And it's been made into a movie?! Thanks for the review :)

I always love your reviews. They are detailed enough it makes me want to find the book. This sounds like a very good, albeit complicated mystery.

This does sound very interesting. I would love to read this or have someone read it to me. LOL Have a great day today.

This sounds intriguing! Thanks for the introduction!

i've read very little japanese literature except maybe the pillowbook of sei shonagon many years ago. they are a fascinating people i think. well mannered yet bloodthirsty.

This book sounds more interesting than John Cheever. I have read some John Cheever back in college, but like you, he didn't really speak to me. Good thing you only spent a few dollars for it.

I'll have to see if my library carry's this book, sounds interesting.
The Inugami dog spirit looks threatening. Thank you for linking up and sharing your post. Take care, have a happy weekend. PS, thank you for leaving me a comment.

I love mysteries and would like to read this! I'll check into at my library too. Enjoy your weekend!

Hello. Thank you for the review. I haven’t read much Japanese literature, but I love Japanese fine art.
Take care.