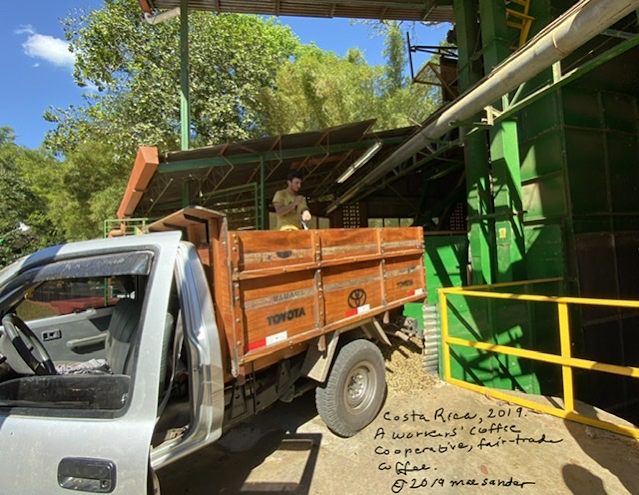 The selection of coffee at my local bulk food store, "By the Pound," includes several coffees from specific countries that are labeled "Fair Trade." Recently, we've been drinking a dark-roast Fair Trade Sumatra coffee. We also learned about fair trade coffee in Costa Rica a few years ago, and how farmers in a cooperative are creating a better life for themselves by keeping more of the profits from their labor. Having become curious about this, I've been looking up whether this designation is meaningful. Or whether it's just another empty claim like so many food labels! 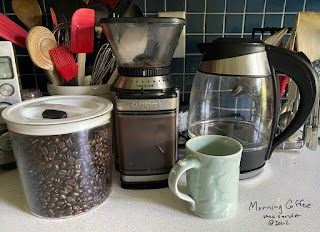 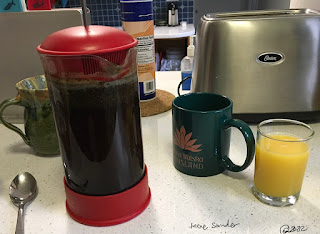 My searches taught me that an organization named Fairtrade International has a wide variety of ways to promote sustainable, ethical, and fair working conditions and prices for producers and processors of coffee as well as other foods, textiles, and other products, particularly in the third world. I do not believe that  this is the only such organization, but it's very large, claiming two million participating farmers in over 100 countries, according to Fairtrade America. Their website highlights the major issues of fairness in the coffee trade.
Coffee is a focus of Fairtrade International because coffee farmers are particularly vulnerable to market fluctuations and abuses by big business. The organization's web page about coffee states: "Worldwide, over 125 million people depend on coffee for their livelihoods, yet many are unable to earn a reliable living from this beloved and valuable crop."
Fairtrade efforts aim to set a minimum price which small-scale farmers receive for the coffee they grow. They try to ensure fair wages for hired labor, and to invest in improvements to their lives and working conditions. "By supporting smallholder farmers to organize themselves into small producer organizations – such as cooperatives and associations – farmers can negotiate better terms of trade and reach wider markets."
Fairtrade International also supports improvement for workers producing and processing other crops, such as chocolate, and they offer various types of certification of small-scale farmers and food producers. They set standards for action by various small-scale enterprises, for employers of individual laborers and contract labor, and for sustainable ways to deal with the climate impact of their production. Outside of farming, there are also specific standards for mining, for textile production, and a few other things. Membership in Fairtrade International includes farmers, shippers, wholesalers, and retailers of various agricultural and manufactured products.
Their statement:

"Companies seeking sustainable supply chains are a critical component of the Fairtrade system – by sourcing Fairtrade products and licensing the FAIRTRADE Marks, they support farmers and workers at Fairtrade producer organizations to take more control over their own futures.

There's a lot to learn about  coffee and its production -- my bit of reading about Fairtrade is only a start, and I have not found any independent evaluation of their methods or their interests. A few months ago I read Coffeeland: One Man’s Dark Empire and the Making of our Favorite Drug by Augustine Sedgewick (published 2020). It documents the spread of coffee drinking and the many issues that arose in its cultivation and distribution, beginning in the 15th century and continuing to the early twenty-first century. While the issues addressed by Fairtrade are different, they are related. (blogged here).

So many issues. So little time!

This is a really interesting post Mae. I don't drink coffee, but it is interesting how many people have been "used" for their products. I read a book about bananas once and how an American Fruit Company-later called Chiquita really took advantage of Central American farmers. I hope you have a great T day and week ahead. Hugs-Erika

There are so many issues.

I buy fair trade coffee but was wondering if the phrase had just become a marketing tool. Thanks for the info.

I try to buy only fair trade or similar practice coffee and cocoa products but it's not always possible.

Fair trade is very popular in Europe. The town I used to live in in the UK more than ten years ago, was designated Fairtrade town. I can’t remember how w qualified, but a large percentage of the population would buy fair trade products and most shops were behind the idea. There was a lot of education as well. All the schools participated in teaching the children about fair trade. I certainly hope this organization is as genuine as it was in the beginning. I certainly would endorse it.
Let us know if you find out more.
Happy T-Day,
Hugs,
Lisca

Hello Mae
I do love a good cup of coffee. I have not seen coffee in the bulk section, I will have to see if it is available in our store. I remember visiting a coffee plantation in Costa Rica, the farmers deserve to keep more profits. Take care, enjoy your day and the week ahead.

If Rick and I ever get to A2 again, we'll have to go there. I'm not a coffee drinker but he definitely is. Very interesting!

This is a great post. Very informative. I have never looked to see what kinds of coffee are in our bulk section. Have a great day today.

So interesting and it's good to buy Fair trade products 😁. Wishing you a very Happy T Day! Hugs Jo x

I look for the Gair Trade seal before I purchase coffee. Thankfully, my favorite French roast bean is Fair Trade. They even show the areas from which the beans were harvested. It's definitely good to know you are buying from companies that don't cheat the small farmers. I really appreciated this post. Thanks fr sharing it with us for T this Tuesday. I hope it opens a few eyes.

BTW, how do you like your Cuisinart grinder? Yours is larger than mine. I have two and neither of mine is a Cuisinart.

@Elizabeth: About the Cuisinart coffee grinder: we find that the settings allow us to grind coffee beans that are ok for either pour over (needs fine grind) or French press (needs medium grind).

Very interesting post for T Day. I, however, do not drink coffee. I drink tea; I wonder is there are issues like this with tea? Happy T Day.

I see the FairTrade label when we're in Oregon (where we shop at a bulk store) and I buy that coffee there. But here in Florida I have not.

We have a lot of Fair Trade products for sale here, and there is also an annual event called Fairtrade Fortnight, to encourage people to buy fair trade. Sorry for my lateness, Happy T Day! Elle/EOTC xx