"High on the Hog" -- Book and Netflix Series 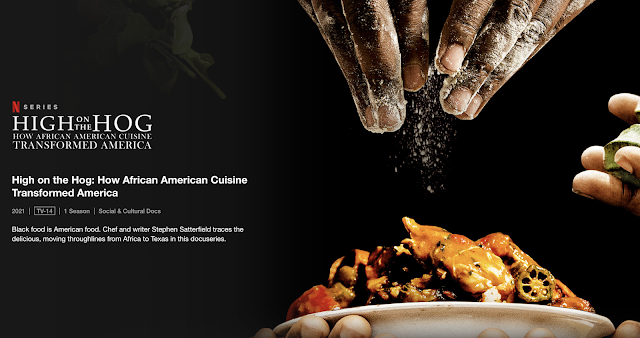 Jessica B. Harris has written several books on the cuisine of the African diaspora. Her most famous, High on the Hog: A Culinary Journey from Africa to America has now inspired a Netflix documentary series titled "High on the Hog: How African American Cuisine Transformed America."
Journalist Stephen Satterfield is the host of series, which begins with a visit to the country of Benin in Africa and an exploration of markets and restaurants there. This episode is titled "Roots," and the next three episodes are "The Rice Kingdom," "Our Founding Chefs," and "Freedom."
Before beginning to watch the series, I reread the book, which was a very well-liked selection of my culinary book club a couple of years ago (blogged here). The book documents the many ways that American cuisine was influenced by the enslaved Africans who brought foods and cooking techniques to America. Okra, rice, watermelon, black-eyed peas, and a few other cultivated plants were brought directly from the countries of origin of the enslaved African people being forcibly taken to America. A very important fact stressed in the book is that many of the enslaved people had valuable skills in food preparation and farming, especially in the cultivation of rice, covered in the second episode.
Harris, in her book, writes about the important foods of the pre-slavery era in Africa:

"A wide band below the Sahara spanned from Sudan in the east to Senegal in the west and developed around the cultivation of sorghum and several varieties of millet. A coastal area and the Niger Delta region, including what is today Senegal and the Republic of Guinea, depended on rice and fonio, a native cereal grass that produces a small mustard-like seed. A third area, also on the coast, ran from today’s Côte d’Ivoire through Cameroon and cultivated yams. These three crucibles—cereals, rice, and yams—also marked three distinct areas from which enslaved Africans were brought to the United States. Each had its own traditional dishes centered on the starch that was its preference. Those from the rice crucible were among some of the earliest transported by the Transatlantic Slave Trade to what would become the United States. They brought with them their knowledge of rice cultivation and their memories of a rice-based cuisine, like that of today’s Senegal, where wags say that the Lord’s Prayer should be rewritten to say, 'Give us this day our daily rice'!"  (pp. 9-10).

High on the Hog Episode 2, "The Rice Kingdom" begins in Charelston, South Carolina, which was the port of entry for a large percent of the enslaved Africans being brought to the colonies that became the US. It continues with the remote sea islands where the Gullah Geechee people -- descendants of the slaves of the region -- were extremely isolated. As a result, their culture has preserved more African folkways and foodways than most other communities.
Rice grew in fields in the South Carolina lowlands. These had been cleared by the labor of enslaved Africans and their descendants, and continued to be cultivated there, especially Carolina Gold, the special rice of the region. After the Civil War, the absence of slave labor nearly put an end to the highly profitable rice-growing industry, but rice cuisine survives in African-American communities as explored by Satterfield and several local food personalities. I found this episode to be a really interesting extension of  Harris's book, not a repeat of her material. The interviews and communal dinners shown are especially appealing and informative.

After watching the first two episodes, I am enthusiastic, and will write more when I’ve seen more of them. This post © 2021 mae sander. Images are from the Netflix series.

Sounds like an interesting series! I haven't read the book, but have read several reviews of it -- something I want to read, one of these days (so much to read, so little time). Good post -- thanks.

Have not come across this, but sounds interesting and I'll give it a go. Thanks yet again for another informative review!

It sounds very interesting. Watermelon is indigenous to where I live so that fact really interests me. I look forward to future posts.

This sounds interesting. I think I will not get the ingredients here, though.