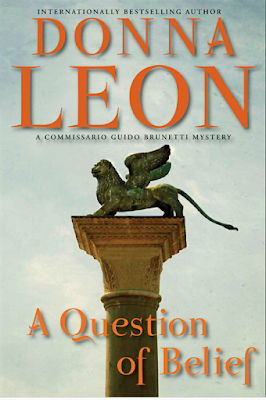 "After all, much of what was being said was lies, or at least evasions and interpretations. The business of the law was not the discovery of the truth, anyway, but the imposition of the power of the state upon its citizens." -- Donna Leon. A Question of Belief, p. 173

Throughout the Inspector Brunetti series, one theme is always the corruption and ineffectiveness of the government, both in Venice and in Italy in general. Brunetti's thoughts vary but he usually feels crushed by the impossibility of actual justice. However, he keeps on finding who is guilty in the many acts of criminal and antisocial behavior that he's forced to investigate. And meanwhile, he stops for coffee, little sandwiches called tramezzini, and the delicious Venetian cuisine made by his wife Paola.

In A Question of Belief, it's brutally hot summer in a Venice with almost no air conditioning, and Brunetti hopes to escape to the cool mountains. However, a murder interrupts the train voyage to his vacation, while Paola and his children continue to their destination. Thus he's on his own for food much of the time. Paola only makes one meal for him, and it sounds great: "prosciutto and figs and then pasta with fresh peppers and shrimp." (p. 65).

Even the take-out pizza Brunetti gets while she is gone sounds pretty good -- "pizza with hot sausage, ruccola, hot pepper, onion and artichokes." He took it home "and sat on the terrace and ate it while drinking two beers and reading Tacitus, the bleakness of whose vision of politics was the only thing he could tolerate in his current state." (p. 201).

Brunetti mysteries make good summer reading, though it's quite cool and pleasant here in Michigan this week. The descriptions of the sweltering heat in Venice made me feel hot anyway. 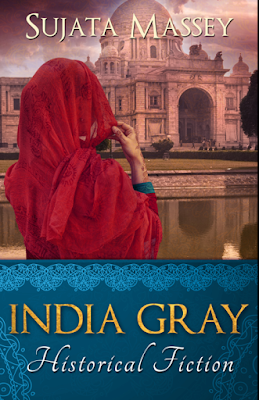 My other summer reading has been some historical fiction by Sujata Massey: several stories collected under the title India Gray.  I admire this author's ability to create vivid characters in very remote conditions. Here, the character Perveen Mistry makes her first appearance as a student at Oxford just after World War I. She's called on to find a missing person, and enlists the support of her friend Alice, who also later appears in the other books in the series that are mainly set in India.

Another story in the collection is set in the 1920s during the British occupation of India, this one about an Ayah who cares for British children and contrasts their life with the painful plight of her own family. A story set during the end of World War II sees the situation from the point of view of an Anglo-Indian woman married to a British agent; it highlights the motives of the Indians who went over to the Japanese side because they thought it would hasten the liberation of India. Finally a very short story is a kind of fantasy about a very young woman who finds a way to defeat a tyrannical Taliban war lord.

I enjoyed these stories, especially the character Perveen Mistry's view of food in Oxford such as "the almond and jam confection known as a Bakewell tart" and "a large pink-and-white-checked Battenberg cake, as well as a similarly sized Victoria sponge," (p. 31, 34) There's also "mulligatawny, the uniquely British concoction of chicken, flour, apples and curry powder," which she liked "better than the mutton soup that was served at least once a week." (pp. 51-52).

The stories in India Gray presented a little bit of history of several places from a point of view that I have never really thought about, especially the view of the colonial British from the point of view of Indian people. The stories aren't just local color, though, they are well-plotted and the characters are developed in an interesting way. I think I'll be continuing with more Sujata Massey's books, of which I've read several before.

I always am interested in the Donna Leon stories because Divers and Sundry reviews them, too. I checked with my library and they don't have any of the series in Wichita, and there don't seem to be any in their lending libraries, either.

The other series sounds a bit sad. I've read a bit about the history of India, which Queen Victoria called the Gem in her Crown. Since she had a fondness for India, I read many stories from that time forward. It's amazing how much India has changed since the early 1900s to what it is today. Nice reviews, of course and I love how you focus mainly on the food.

Just read your question about butterfly houses. Yes, our Botanical Gardens has a butterfly house, They are a thrill to watch and even better when they land on your outstretched hand. I haven't been since 2019 and I'm not sure they are even open this year.

We watched a TV documentary on the British Empire you might find interesting. But I cannot remember what it was called. Venice in summer must be stifling!

It seems you've been traveling to Italy & India with your reading lately. Good places to mentally go! I like both locales ... you have me curious of Sujata Massey's novels ...

I need to read book 3 in the Brunetti series. The Massey book sounds good also. Summer and mysteries go together well; actually mysteries are always good, but in the warm days of summer, they are the best.

I had Indian colleagues. I heard stories, oh, boy. But I think it´s always two faces you find everywhere.
Just reading about Italy, will tell about it, too (but give me time).

You are ahead of me with Guido. I love that series. I think I'm on #9 now -- A Noble Radiance. But I had to take a break from Venice to read something for Paris in July -- "The French Widow" by Mark Pryor!