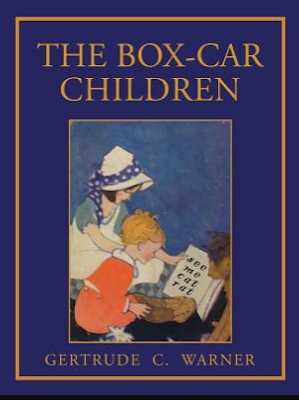 The Box-Car Children by Gertrude C. Warner, first published in 1924, is a highly appealing and lastingly-popular tale that seems to me to be very compatible with the imagination of a child. I just read it, I'm not sure why.
Four motherless children move into a strange town with their father, who gets drunk one night and then dies the next day (no details). The children fear that they will be given to their grandfather, who is mean and doesn't like them (they think). So they run away and find an abandoned box-car on a disused railway siding in a woods not far from town. This all happens in the first few paragraphs of the book, without much drama.
The drama is in how the children manage to take care of themselves in their makeshift home. Within days, they figure out how to get food, make hay and pine-needle beds for sleeping, use a nearby creek for washing dishes and bathing, and somehow even adopt a dog. What schoolchildren, reading such a book, would not like to imagine being totally free and figuring out for themselves how to meet all their needs? Each chapter shows a new way the four box-car children take charge of their own lives and well-being.
This fantasy, however, is problematic for the imagination of a mother -- or a grandmother. Charming as it may be for four children to respond to their father’s death by running away in fear of their grandfather and immediately adjusting to living independently in an abandoned box-car, I'm afraid that an adult imagines all kinds of other things, and thinks of all sorts of questions, dangers, practicalities, anxieties....
My problem is that I didn’t read this book when I was a child when it would have probably captivated my imagination. Maybe a teacher read part of it to a group of kids at some point, but I only remember hearing of the book, not anything about it. And now I find it very hard to love this story the way that children have loved it for almost a century. I wonder if it’s still part of the curriculum these days, as it evidently was for much of the 20th century.
I enjoyed the 1920s vibe in the story. When they run away, the four children have $4, which is enough for food for several days. At first they eat bread and milk (keeping the milk bottles cold in a stream that conveniently runs near their box-car). They find bowls, spoons, and cups in a nearby dump, wash them in the stream, and they’re ready to roll. Everything just works out like a dream in a world that wouldn't work that way any more --

“It was a rapturous moment when Jess poured the yellow milk into four cups or bowls, and each child proceeded to crumble the brown bread into it with a liberal scattering of blueberries.” (p.15. Kindle Edition of 1924 version)

The oldest boy, Henry, is 13 years old, and he finds a job mowing the grass and doing odd jobs for a doctor in the not-at-all faraway town. A boy working this way probably wasn't unrealistic 100 years ago. Helping with his new employer's vegetable garden, he thins the carrots and onions, and brings the small discards home to the box-car, where his 12-year-old sister, Jess, is boiling some meat in a kettle that was found in the dump, over a fire-pit that the children have built. Meat and vegetables are ready:

“And when she ladled out four portions on four plates of all sizes, some of them tin, and laid a spoon in each, the children felt that the world held no greater riches. The tiny onions floated around like pearls; the carrots melted in your mouth; and the shreds of meat were as tender as possible from long boiling. A bit of bread in one hand helped the feast along wonderfully. The little wanderers ate until they could eat no more.” (p. 19)

So real to a child! And there's even a cherry orchard, where they were allowed to pick:

"It was a 'cherry year,' certainly. There were two varieties in the orchard, the pale yellow kind with a red cheek, and the deep crimson ones which were just as red in the center as they were on the outside." (p. 24).

Mary, the maid of the doctor's household has even made "cherry slump" which she gives them -- and it's delicious... "they never will forget that cherry slump made by Irish Mary." The stereotype of the Irish maid: another point for the adult reader. (p. 25)

Note that the edition that I read on my Kindle was published in 1924, but was not widely read. The better-known version of this book (which you probably remember if your elementary teacher read it to you) was published in 1942, with numerous changes to the details about food and possessions, different names of some of the characters, and most important, a different story of how the children ran away to live on their own. My dim memory of being read this book in early elementary school probably is a memory of the 1942 version, but it really doesn't matter since I scarcely recall the book at all, but finally, I got around to it!
Blog post © 2021 mae sander.
Posted by Mae Travels at 8:31 AM

I've not heard of this book. I wonder how many children, after reading it, tried to run away?

I never heard of this book. Scary and clever.

It's so interesting to look at children's (or YA) lit from the past. I agree with your summation--this might cause some questions and anxiety for an adult reader--trying to imagine four children surviving on their own. Total fantasy.

I loved these books as a kid after my fourth or fifth grade teacher read them to us. You've made me want to read them again. I think it is great to read children's and young adult books every now and again. Lots of them are really good writing and variety is the spice of life as that old cliche goes.

I remember reading this book as a kid and just loving it. I never wanted to run away but I loved the idea of how we could survive without the grown-ups!

I've never heard of this book, and know that no teacher I had would have read it to me/the class. Somehow I don't find it as endearing as most seem to. I see it as a fairy tale, where everything is handed to the children on a messy and slimy platter.

This would never happen in the real world. Of course, no one would have to worry, because the govt. would step in and tirelessly look for the children who would then be turned over to Children's Services and promptly sent to four different foster homes. Sorry if this sounds all too true.

Yes all I can recall is being totally captivated in grade school .... by the book. OMG. we were so into it. a train. a boxcar ... being on their own. was there anything cooler? It was huge. even in the early 1970s.