Rousseau is well-known as a painter of imaginary scenes of life in jungles far from his home in Paris. His vision of the tropics is based more on the dioramas of the Paris Natural History museum and maybe the zoo than on any actual observation, as he never traveled, only imagined the places that he painted. 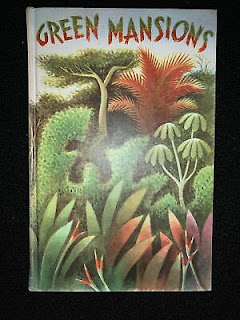 Hudson was a naturalist who wrote many works about the natural history of South America, especially his native Argentina. I recently read quite a lot about Hudson in Jonathan Meiburg's A Most Remarkable Creature: The Hidden Life and Epic Journey of the World's Smartest Birds of Prey. Hudson is an interesting character, though Meiburg actually told me more than I wanted to know about him. But I got intrigued, and read Hudson's best-known work, the novel, Green Mansions: A Romance of the Tropical Forest (1904).

As I read, I thought about Rousseau's paintings, which date from the same time and maybe the same spirit of romantic longing for some imaginary primeval jungle environment far from the city. Hudson lived in London for much of his later life, and he only saw the open pampas of Argentina where he was born (to English-speaking parents), not the lush forests of the Amazon and the Orinoco Rivers in the north of the continent. So Green Mansions, like The Snake Charmer, is based on imagination more than on observation.

Green Mansions is a dramatic and tragic tale of a white man named Abel who is living in a remote tropical village with a small number of native inhabitants for whom he has little respect. He defies their instructions to stay away from a part of their territory that's inhabited by evil and little-understood spirits. In this forbidden forest Abel finds a beautiful woman -- maybe a she's creature that's not quite human and only seems like a small woman.

Rima, the forest woman, speaks a language that sounds like whistling bird song, but she also knows Spanish, which Abel speaks as well as English. She has an uncanny ability to appear for a moment, and then to disappear into the forest, and Abel becomes obsessed with her, and then goes with her on a long and futile search for her place of origin. Their story is sad and very romantic, as he convinces her to love him in a repressed Victorian kind of way. If you want a plot summary, there are many available.

In all of the novel's attitudes, including a pretty bad contempt for the natives and their culture, Hudson's work is very much a product of its time. I read it when I was in high school, and couldn't make sense of it. Now that I can make sense of it, I'm not crazy about its overblown emotionality. I have reservations about the described bravery of a white man (self-identified as a white man over and over) who walks through the jungle alone, eating bird's eggs and snakes and odd vegetation. The gushing descriptions of Abel's love for Rima, a slightly supernatural creature, don't appeal to my literary tastes. Very dated, I'd say.

In contrast, Rousseau's paintings have always fascinated me, and I love to look at them. Rousseau's vision of the mysterious jungle is not accompanied by a romantic and emotional sensibility. but by some sort of fascination with the idea of jungles and snakes and wild animals. His primitive style is famous and much discussed in the context of modernism in art: he seems to look forward to the twentieth century not backward to the past.

Note that I have no reason to think there is actually a connection between painter Henri Rousseau and author W.H. Hudson, it just occurred to me while I was reading. I tried briefly to find a previously identified connection, but did not discover any. I did locate a book called "Rousseau and Naturalism in Life and Thought" by an author named William Henry Hudson. However, it's by ANOTHER man named William Henry Hudson, an obscure American professor who lived at about the same time! And it's about the philosopher Jean Jacques Rousseau, not the painter Henri Rousseau. Go figure.

Wow this sounds like a great read. Thanks for sharing it.

I don't know Hudson. And I don't think -- if fact I KNOW -- I don't want to read this book, now that I've read your review. Doesn't sound like my thing at all, at least not something I'm currently interested in reading. Rousseau, though, I like, a lot, and will happily look at one of his paintings any time. And I can see the connection between the two, at least in one's imagination. Good post -- thanks.

I think I'd rather read more about Rousseau than Hudson. LOVE his art!

This is a fascinating post Mae. I know just a tiny bit about Rousseau's paintings (mainly I've seen them), but never heard of Hudson at all. I love learning about new books, people, places and times. Thanks for sharing.

I never heard of him, sounds very interesting. But... how can you read so much so fast?!

Rousseau has always captivated me. (Back in my former life, I had a student choose Henri Rousseau for a research project. He ended up turning in a report on Jean-Jacques Rousseau instead. Bless his heart! I do believe he was asked to redo the assignment!)