"Where the Crawdads Sing" 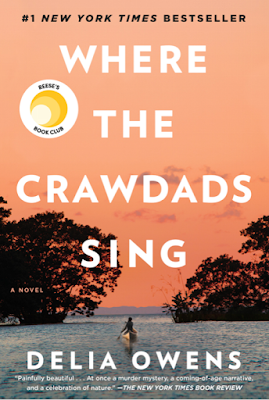 This is an easy book to like, and it's certainly been popular since its publication a few years ago -- it's also going to be a film. I was as entranced as many other readers including some of my friends. The central character, Kya, is abandoned as a child and learns to take care of herself and live in the wooded marshes of coastal North Carolina. Her shelter is a primitive cabin with very few modern comforts. She discovers how to live self-sufficiently, gathering mussels and other shell fish to sell to a sympathetic shopkeeper in the local town of Barkley Cove for basic food (mainly grits) and for fuel for her boat and her kerosene lamps. She gathers and cultivates vegetables to eat with her grits and shellfish.

"Maybe it was mean country, but not an inch was lean. Layers of life—squiggly sand crabs, mud-waddling crayfish, waterfowl, fish, shrimp, oysters, fatted deer, and plump geese—were piled on the land or in the water. A man who didn’t mind scrabbling for supper would never starve." (p. 8).

A big contrast between her life and that of the other local residents is in the food they eat. For example, the town contrasts to her marshland home:

"A full bank of windows, framed by hurricane shutters, covered the front of the Barkley Cove Diner, which overlooked the harbor. Only the narrow street stood between the building, constructed in 1889, and the soggy steps of the village pier. Discarded shrimp baskets and wadded-up fishing nets lined the wall under the windows, and here and there, mollusk shells littered the sidewalk. Everywhere: seabird cries, seabird dung. The aroma of sausage and biscuits, boiled turnip greens, and fried chicken thankfully overtook the high smell of fish barrels lining the dock." (p. 61).

Over time, Kya learns to use the resources of the marsh around her home. She becomes a self-taught naturalist, and the book's descriptions of the natural world of birds, flowers, grasses, mushrooms, and marsh residents are delightful and beautiful. She's wary of other human beings, but not too much. On the surface, it's a beautiful story as it develops, though there are dark forces at work (but no spoilers here).
Kya is very shy of the small town not far from her cabin, but never becomes really comfortable there. She attends school for only one day -- tempted by the offer of a school lunch that included chicken pie:

"Copying the others, she picked up a tray, a green plastic plate, and flatware. A large window with a counter opened into the kitchen, and laid out before her was an enormous enamel pan of chicken pie crisscrossed with thick, crispy pastry, hot gravy bubbling up. A tall black woman, smiling and calling some of the kids by name, plopped a big helping of pie on her plate, then some pink-lady peas in butter and a yeast roll. She got banana pudding and her own small red-and-white carton of milk to put on her tray." (p. 29).

She's too tense and self-conscious being near the other kids in the cafeteria, who definitely look down on her. Though hungry, she can't eat this appealing meal. She never returns to the school, cleverly eluding the truant officers for the rest of her childhood. The standard food becomes one of the ways she remains different from the other characters in the novel. Eventually she becomes more adept with cooking, as well as some (but not all) the other habits of town people. Near the end, for example, one of her long-lost brothers reappears:

"She cooked a southern supper as Ma would have: black-eyed peas with red onions, fried ham, cornbread with cracklin’, butter beans cooked in butter and milk. Blackberry cobbler with hard cream with some bourbon Jodie brought." (p. 241).

Overthinking this book is a temptation. It's full of literally dubious events and situations, and the details of Kya's life are all somewhat unrealistic. Too many impossibilities!  It's so enjoyable to read it, though, that I don't really want to do any reality checks, just to regard it as a kind of magical realism. Unfortunately, the main Black characters in the novel, a couple called Jumpin' and Mabel, also have some of the characteristics of the style called "romantic racism" or the stereotype called "the Magical Negro." This is "a supporting. stock character in fiction who, by use of special insight or powers often of a supernatural or quasi-mystical nature, helps the white protagonist get out of trouble." (link)
In sum,  I liked it in spite of myself.
Blog post © 2021 mae sander.
Posted by Mae Travels at 7:00 AM

It took me awhile to wrap my head around the fact that a little girl was left alone and had to take care of herself. But once I accepted that I really loved this book. Delia Owens worked as a zoologist with her husband Mark and they lived in Africa for many years. She wrote some books about their life there and the animals they studied. Have you read any of those? If not, I'd recommend them.

Just my opinion but I thought the ending was a cheap trick to an otherwise good book and not a very credible thing. I did like all the environmental information although to expect someone in that situation to acquire all the knowledge was a big stretch. A mixed review for me but I do look forward to more of her writing.

I read a third of the book and tossed it aside; I find it hard to enjoy a book or movie too that isn't believable, where things occur that probably never would in the real world. Owens is definitely adept at writing and I will look at other books. After reading all the hoopla about Crawdads, I finished reading it. It was OK, an easy read, but you summed it up, "overthinking this book is a temptation." Read it for what it is!

I’m with you, I loved it. The nature aspect, the characters, and the mystery that permeates it. I can acknowledge the concerns people would have but I slid right over them.

I seem to be the only person who hasn't read this book. It sounds a bit improbable, but I will reserve judgment because I'm unfamiliar with it.

The main thing is you enjoyed the book! You grow with what you have to handle, that´s about it, right. Oh, and yum :-)

Sometimes it's nice to just read a book for the enjoyment.

I keep seeing this book crop up in posts and I think I might want to read it. Then I read a synopsis and it just doesn't seem to grab me. I see many mixed reviews in your comment section. But, as always, you write excellent reviews.

I just finished News of the World and loved it. I heard Tom Hanks voice throughout as I know it's a movie now with him starring as Capt. Kidd.