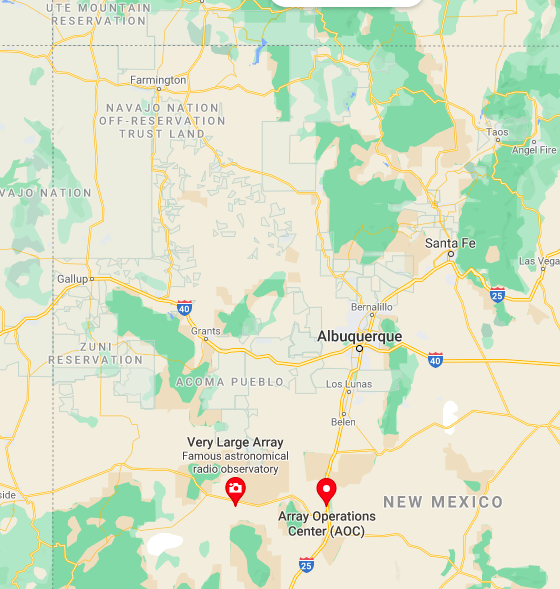 Stargazer by Anne Hillerman is the twenty-fourth police procedural novel set on the Navajo reservation in New Mexico and the surrounding area. It features detectives Bernadette (Bernie) Manuelito and Joe Leaphorn, familiar from the earlier novels.
Beyond the territory of the reservation, much of Stargazer takes place in the vicinity of the not-fictitious Very Large Array radio-telescope shown on the map above in relation to the reservation. I enjoyed the book's descriptions of the scenery and the local ambience, though I found the plot of the book to be a little thin and not as inventive as some of the earlier ones.
Comfort food as always plays a big role in this series: I always look for food in detective novels. Here, it definitely  characterizes the detectives and their friends, as well as suggesting the progress in time of the investigations. Leaphorn definitely likes to eat: in one scene, he warms up some lasagne and inhales "the warm spicy aroma of tomato sauce, meat, cheese, and oregano."
Leaphorn's friend and housemate Louisa makes a salad to go with the lasagna: "... to fresh spinach, she’d added onions, red and green peppers, tomatoes, and something white, crisp, and slightly sweet he hadn’t tried before," which turns out to be  jicama. (pp. 155-156). Another time: an old friend of Leaphorn's says he "can make a spaghetti sauce so good you’d think it came from a jar.” (p. 31).
Bernie is a nurturer, both of her husband Jim Chee (who plays a rather small role in solving the mystery at the heart of this novel) and of her mother and sister. At one point, she makes soup to try to get her mother, who has problems with eating, to take some nutrition. Bernie herself is a picky eater. In one scene, at a diner, she takes the lettuce and tomato off of her burger, something we've seen her do in earlier novels. She's doubtful about her colleague's choice of "a casual place that specialized in New Mexican food—red and green chile, posole, flan, sopaipillas, even tender tortillas made with blue corn." The colleague reassures her: “They do great rellenos with fresh green chile this time of year. I think you’ll love their specials, but if not, they have regular American food, too.” (p. 230).
When offered take-out Chinese food, she's really doubtful, and relieved when she finds "small meaty ribs arranged on a pile of fluffy white rice. No odd green things. No mystery sauce." (p. 163). Above all, throughout Stargazer Bernie is trying to reduce her consumption of Coke, which she really loves. A drink of ice water just doesn't do it for her.
These habits of the detectives have appeared often since the original series author Tony Hillerman began writing about policemen Joe Leaphorn in 1970; he subsequently introduced Jim Chee and then Bernie, his younger colleagues. Since Hillerman's death in 2008, his daughter Anne Hillerman has added several novels to the series. I've enjoyed them all, though I admit some of the earlier ones are better.
The Navajo detectives never seem to get much older, although each novel is set in the present time that it was being written -- descriptions of cars, iPhones, and the like keep up with the times. Leaphorn was around 40 in the first book, so now he must be around 90. His ability to speak English has been impaired by having been shot in the head a few books ago -- leading Hillerman to render his speech in very annoying broken English, which I find mildly offensive. He's still fluent in Navajo, can write good English, and seems mentally very sharp, so he's called as a consultant in on just about every case, including the one in Stargazer.
Bernie Manuelito is aging too: her college roommate who has a major role in Stargazer has a 19-year-old son who was born after their college days. So Bernie must be getting close to 40, despite being viewed as quite young and still deciding when to start a family with Jim Chee. I'm always fascinated by the aging of detectives in long-running series. More examples: Agatha Christie introduced Hercule Poirot in 1920, when he was already retired, and he continued detecting until his last book in 1975. Maybe he was 110 years old? Maybe time stood still? Miss Marple, Christie's elderly spinster detective, first appeared in a story in 1927, and continued to be an aging spinster until 1976. Donna Leon's Venetian detective, Inspector Brunetti, first appeared in 1992, with 24 novels in the series. Brunetti's children were teenagers in the first book. As far as I know they have continued to be teenagers. Time doesn't stand still as technology advances throughout the books. I love them all, and these little things don't bother me, just pique my curiosity.
The champion of long-lived detectives, I think, is Captain Largo of the Hillerman books. In 1970, he was already the boss of the Navajo police station where Leaphorn worked until his retirement (in the book published in 1996). He's still there, the boss of Jim Chee and Bernie Manuelito in Stargazer. Largo's possible retirement is a topic of discussion among the policemen in Stargazer. According to one of the other policemen: “He was there when Ship Rock landed and our relatives climbed off and started planning for the first Navajo Fair.” (p. 179).
Blog post © 2021 mae sander.
Posted by Mae Travels at 1:00 PM

We visited the Large Array when we traveled through that area. (I loved every minute we spent in that part of the country ). We read all the earlier Tony Hillerman and some of Anne’s, but I’d kind of forgotten about this series...thanks for the reminder. As you say, not as good as the earlier, but not at all bad. And I love place-centered novels , especially the place in these series. ...... I read where Agatha Christie said she would have started with Hercule as a younger man, except she didn’t know the series would go on for so long! (I got the impression she got rather tired of him, but her readers kept demanding more!)

Many of the detective books I read as a series have the people ageing which is how it should be. Now I have something new to concentrate on when reading.

This sure makes one hungry, how do you find such books?

Divers and Sundry also reads and reviews these same Hillerman books. It's amazing how you find food references in these books, and all the reviews I've read (I think Erika has reviewed one or more, too), none reference food.

I love how you pick up on the aging of each of these characters. Another author with a great series where the detective never seems to age is Sue Grafton's Kinsey Millhone alphabet series. Grafton's family said no one would ever ghost write for her, and when she died in 2017, she had not started writing the final letter, Z.

We listened to an audiobook from the series when we traveled through that part of the world. It was such a startling experience to come upon the VLA that I took photos and posted on Wordless Wednesday: https://readerbuzz.blogspot.com/2016/12/vla-very-large-array.html.

What a great review, you are obviously completely invested in this series.

I haven't read any books set in this part of the world, or from a series which has been running for so long. Do you think that the books work okay as stand alone stories, or do I need to read the series from the beginning?

I also like that Anne took over the writing of this series from her father and I wonder how well you think that is working out?

I never really gave much thought to the aging of the protagonists in my series reading, however as the first Hillerman book was written some 50 years ago, allowing their protagonists to age is definitely the right thing to do!

Thanks for sharing and have a good weekend :)

This sounds like a very good read. Thanks for sharing it. Have a nice day.

I love reading about the food that the characters eat too. The food described here is making me hungry.

I've never read this series but I have friends who love it. So many books, so little time!

I've never read anything by Hillerman but the sound of this book makes me want to do so. I like the review, you always give such great reviews of books.

I've never really thought about the characters failing to age in a series of books....granted most series aren't quite this long...but many are long enough that they should include retirement LOL

I loved this series by her father -- I started reading them in the 1970s when I lived in the southwest. I should probably give the ones by his daughter a try.