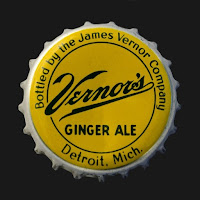 I tried my first taste of Vernor's ginger ale during a family trip to Detroit when I was around 12 years old. I have a distinct memory of the hot gingery flavor and carbonated bubbles going up the back of my throat and into my nose. I didn't find it unpleasant, just very surprising. I had drunk Canada Dry ginger ale back home in St.Louis: it was very smooth and mild in comparison, and the flavor stayed in your mouth when you sipped it. Life used to be full of little adventures!

Last week I was thinking about the soft drinks I remember from my childhood in St.Louis, and I started to remember tasting Vernor's, which at the time was unknown outside the Detroit area. I haven't had any Vernor's for a long time now, as the strong flavor was discontinued and I stopped finding it interesting or appealing to drink. However, I thought I would share my Vernor's memory with the bloggers who write about drinks each week at Elizabeth's blog Altered Book Lover.

Vernor's brand was founded by James Vernor in the 1860s, and has been in business ever since. However, the name and recipe has been sold a number of times, owned by several big bottlers and food companies, and changed to suit modern economy (read: cheaper ingredients) and tastes -- the details are boring.

I'm also aware that the apostrophe in the name Vernor's disappeared in 1959. When I looked for pictures of vintage Vernor's bottles and bottle caps on the web, I saw some easily identified bogus claims -- they were apostrophe-less, so couldn't have been as old as they were said to be. Collectors beware!

Another historic Detroit delicacy that I'm thinking about was Sanders' Milk Chocolate flavor hot fudge sauce for ice cream sundaes. I learned about that treat much later than my first encounter with Vernor's! Sanders' ice cream shops were a regional tradition in Michigan, with products, like candy, "bumpy" cake, ice cream, toppings, and Hot Fudge Cream Puffs. When we first lived in Ann Arbor (which is around 30 minutes from Detroit), we occasionally had an afternoon ice cream at a Sanders' shop, where you could also purchase bottles of fudge topping, cakes, etc. Like Vernor's, the brand began in the 19th century through the efforts of one man, in this case Fred Sanders.

While the Sanders brand still exists, the original chain went out of business some time ago. Since then, the name and recipes have belonged to several different owners. Sanders' branded products are definitely still available in supermarkets: I'm thinking I should buy a bottle of fudge sauce!

Most people if they think of Detroit at all think of Motown music and the Detroit automobile industry. If you are an art lover, you'll probably have heard of the Detroit Institute of Arts. Fred Sanders and James Vernor invented their products far earlier than the invention of automobiles, the emergence of Motown music, or the founding of the museum. And of course there are other Detroit food and drink traditions, like Stroh’s beer or Cony Island diners — but these aren’t my thing.

Blog post © 2021 mae sander (no relation to the hot fudge, which has an S on the end).
Commercial images from the web.

Good post. I have not heard of Vernors or Sanders. But then I am a west coast girl. LOL

The only ginger ale that I had was Canada Dry and Schweppes. I haven't had one in years.

My mom would give us ginger ale when we had a tummy ache. Otherwise we hardly ever got "pop" (West Coast US) ... I think ours was Canada Dry. ... we found trying different regional food specialties one of the fun parts of traveling by RV.

That's a nice post down memory lane Mae. I am curious what bumpy cake is. I'll go look it up after I write this. Local specialties seem to be disappearing in many cases. Too bad you can't get Vernor's ginger ale any more. Have a great T day.

I prefer the strong ginger taste of ginger beer. I've just made fudge ice cream but I'm sure it's not like the sauce you showed us. Thanks for sharing your memories.

"...cheaper ingredients"... sad, it´s the same all over. And faking the name like that.
Hmmm. Guess I´ll buy some ginger ale later :-)
Only got to know this yummy stuff in 2019 in Perth! But yipeeee, you can buy it in Germany now, too.

Yes, thinking of Detroit is car industry. And people leaving, ghost town comes to mind. I saw a docu on abandoned places there.

Greta memories and I definitely vote that you go buy some of the fudge sauce! Next week you share with us the fun things you made with it! I love Ginger Ale - especially the old recipes with some bite. Happy T Day!

I'd love to try that ginger ale 😁. We call it Ginger Beer here although it is non-alcoholic and the brand I drink is "Old Jamaica" which is a little fiery, it's lovely with apple juice. The fudge sauce looks yummy, I make my own for when we have strawberries and ice-cream in the summer - not long now! Happy T Day wishes! Hugs, Jo x

Detroit has given us a lot! I'm a Canada Dry gal, but my experience is limited. I'd never heard of these brands. Happy T Tuesday!

Things don´t taste like they did once. I´m sure it is because manufacturers change the récipes to economise. Hubby used to work for Cadbury´s who makes chocolate bars and Candy bars with chocolate (similar to Mars bars). The récipes were constantly changed.
Happy T-Day,
Hugs,
Lisca

I love ginger ale. Growing up we bought Schweppes or Canada Dry. I don't drink soda any more but it was always a special treat.
I enjoyed hearing about your childhood memories and their association with certain food/drink.
Happy Tea Day,
Kate

My Mum used to love Ginger Ale - I think it was made by Schweppes. We used to Ginger Beer from the local shop...and there was the year my Mum made some - not a great success!! Happy T Day. Hugs,Chrisxx

Ah, Vernors. And don't forget Faygo. I don't like the flavors but it's the cheapest club soda around!

I have never heard of these brands. Ginger Ale was either Schweppes or Canada Dry. We used to go to Bailey's, an ice cream shop next town over from where I grew up. They made their own hot fudge sauce. They had old-fashioned, ice cream dishes on a "silver" charger and would ladle the fudge sauce over the ice cream and it would flow over the dish. Heaven! Thanks for the memory. Happy T Day

I find it very sad when brands are bought out because they rarely taste the same. Some of my favorite foods from the East Coast, such as Tastycakes, Breyer's Ice Cream, and Berger's Cookies, have morphed into something different. In the case of Berger's they were actually required to cut the transfat and so had to come up with a new recipe, but it must be said the cookies don't taste as good now! :--)