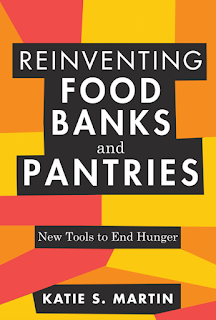 Thinking about the way that food banks and food pantries work, I've been reading Reinventing Food Banks and Pantries by Katie S. Martin. At one point, she quotes the famous line from Michael Pollan about choosing food that your grandmother would recognize rather than highly processed foods. This idea has a number of implications for enlightened food programs. The author's advice is to go beyond just providing food -- any food -- for hungry people, but also for helping them to improve their food choices and eat a healthier diet. Pollan's point she says is: "The less packaging, preservatives, and processing, the better for our health and that of our planet." She continues:

"Now think about solicitations from food pantries and food banks to help tackle hunger. A typical food drive highlights the need for packaged, nonperishable food items and often the lists of requested food items are of questionable nutritional value, such as mac and cheese, stew, and pancake mix and syrup. No wonder there is a disconnect between nutritional advice and health outcomes among food pantry clients. We can do better." (pp. 98-99).

Just before that, the author was writing about a much more relevant way to look at the grandmother thing: your grandmother may not be like mine! The ethnic appropriateness of food is a big deal when you are trying to provide nutritious foods that will really help people eat better. She wrote:

"I spoke with a registered dietitian who is working on a food is medicine program to provide medically tailored meals for people with chronic diseases. She said that she has been talking with her nutrition colleagues about the cultural appropriateness of the food they provide. For example, she said that most of her dietitian colleagues are White women, and they often promote items such as hummus, cottage cheese, and quinoa. Sure, these items are healthy, but they may not be familiar to people of color, let alone affordable or available. In fact, they may turn off the very people we are trying to serve. ...

"Susannah Morgan, the CEO of the Oregon Food Bank, describes how focusing on equity has changed their food bank in every way. It has changed the food that they buy. She explains that 'when people think about equity they think about interpersonal relations. But it’s about the way you see the world. Using an equity lens makes you slow down, see who is making decisions, what they might not know and who is not represented.' Their food-purchasing staff used to buy a lot of tomato sauce. But this reflects cooking habits primarily of people from Northern Europe. By thinking about cultures with different dietary habits, they decided to use the same dollars to purchase diced tomatoes, which can be used for pasta sauce but also tacos, curry, and many other dishes."  (pp. 96-97).

Reinventing Food Banks and Pantries is a book of advice for the professionals and volunteers who run food banks and food pantries. It's very preachy -- the author has a set of ideas that she would like food charities to follow, and the main point of the book is to influence the way they view and run their programs.

The central idea of the book is that in an emergency situation, where people are unable to get food (like the beginning of the pandemic) it's necessary to provide food efficiently in any way possible. However, food insufficiency is a chronic problem, so she offers a number of suggestions to improve on just delivering food to the needy. She holds out hope that food banks and food pantries can help people overcome the poverty, poor nutrition, and overall social problems that underlie food insufficiency. I won't try to describe the entire approach and the many examples of food programs that have been more generally helpful than just offering boxes or bags of food.

While I'm very interested in the general problems of food insufficiency in the US,  I'm not at all the target audience for this book.  I read the newsletter and other material from the local organizations, and I believe that they have already implemented many of the suggestions in Martin's book. For example, our local Food Gatherers' website says that 60% of the food they distribute is protein and fresh produce. So even if I would be directly involved (instead of just making a contribution), I don't think this advice would be relevant to anything I would do.

Of all the book's ideas for improving food charity, I find the suggestion of trying to achieve cultural appropriateness to be most interesting. It also reminds me of a little bit of history, specifically, the field of social work emerged from the settlement house movement in the late 19th century, and one of their goals was to instruct poor immigrants in the "superior" ways of American cooking, as opposed to those of their native countries. "Cultural appropriateness" wasn't invented back then. But the goal of changing people's lives instead of just giving them handouts isn't new.

I run the food pantry for our Parish and this is a huge undertaking. It is, unfortunately, much more expensive to give fresh food over packaged food. We would not be able to feed as many or give as much without supplementing with packaged food. We do try to include fresh meats, eggs, butter, milk, eggs, etc. with each order and when produce is plentiful our local farmers are very generous.

My opinion of food banks now is not good. After volunteering at one, we realized it is the ones running the local food bank and the volunteers who reap the food. The leader of it took more than a dozen turkeys home because she said she had a large freezer, even when the one at the food bank wasn't half full. Instead of handing the goods out, they all took their share first. And instead of giving out all the fresh bread, etc they said the people are allowed only so much and we should all take it. They didn't hesitate to take meat and canned goods.
We never did and we quit!

I feel sorry for your friend Pam. Our food bank is not like the one Pam volunteered for. However, as much as I recognize that food banks most often are set up to take non-perishables, it never occurred to me that there was food inequality in people of color, usually the very ones who need it the most. Yet another wrinkle in the food insecurity story that I am glad you are bringing to light, dear Mae.

Might it not be a better idea to engage with local communities asking them what they use to cook with?

Here it´s as far as I know done by professional companies ReFood for example. I know of one supermarket that sells food past the best by-date for very little money (making sure it´s still OK).
Some supermarkets "dump" food that is "not good enough" anymore for the "normal" customer in clean bins and, although it´snot allowed look away when people come to get it.
But there are always people like Pam described. I saw it at the beginning of the European migrant crisis. There were fights on food cause some refugees took as much as they could grab and others went away hungry. It´s difficult.

I'm not the target audience for this book, either, but it does sounds interesting. We usually make $$$ contributions to food banks so they can buy what they think is best. But local groups, like boy scouts, will sometimes do food dives, and provide lists of canned/packaged goods that they would like to receive. We always have to buy them, because they're never anything we have on hand.

@Kithen Riffs -- You are right: financial contributions to food banks or food pantries are indeed much better than giving them food. They have access to lower-price sources than what you would spend on groceries, including sourcing from Feeding America, a national food bank that obtains surpluses and much lower prices. Also they have other expenses, like a warehouse, trucks, and some employees besides volunteers, and money helps with those essentials. And in most cases, they know what the community needs, or are working on it.

Food drives serve these charities with publicity, so they will always encourage them.

@Pam -- sad that your food bank was so badly run. Many of them are far better than that.

Interesting book. We donate food to various places but usually it's canned goods or prepackaded items. We donate dog and cat food too.

Interesting post. It is a complex issue. In many cases, food that does not spoil is important. And limited cooking facilities or lack of refrigeration is a problem for some households. Imagine living out of your van ... people do! Or trying to raise a child when all you can afford is a motel room. If you are lucky, you have a microwave and a tiny fridge.