Food Thoughts for May Day

May Day is celebrated in much of the world as International Workers' Day with parades and street activities. In this context, I'm thinking about workers here in the US and abroad. I appreciate how large numbers of working people have kept going despite the past 15 months of pandemic risks and dangers. Worldwide, their contribution to the welfare of their societies has been amazing.
"Essential Workers" received the thanks of many Americans. We realized that people who process and sell food and other necessities, medical professionals and helpers, people who take care of children, people who clean our cities, and many others were forced to take risks that white-collar workers and we retirees could avoid by staying home. Our thanks were profuse at first, but we may be forgetting what we owe them -- especially those who were poorly paid or who actually became ill with covid. So I want to use this moment to think about them, and remind my readers of their work and often of their sacrifices.
Note: May 1 was originally chosen as International Workers' Day to commemorate the 1886 Chicago Haymarket Riot, but conservatives in the US at some point established the US Labor Day holiday in September in order to avoid the implications of commemorating this radical uprising.

Food history seen by a critic of America

Today in the Guardian I read an article titled "Food injustice has deep roots: let’s start with America’s apple pie." This very long article outlines the injustice of the American food system in several ways. The author, Raj Patel, criticizes the US for its colonial past, for its appropriation of many food ways from other cultures without acknowledgement, for its voracious present, for economic domination of other nations, for its unfairness to workers, and for its continuing unjust future, as he sees it. Although I think his view is very extreme, there are some good points in the article. His conclusion speaks to the International Workers Day tradition:

"It is clear, though, that tensions and imperfections and losses lie ahead. The US continues to spread its economic model internationally. While Joe Biden’s administration seems ready to infuse cash into the management of domestic hunger, internationally it’s agribusiness as usual. But as May Day reminds us, solidarity between workers need not be bounded by the nation state. The United States was made through global connections. It will be remade when those links are not ones of oppression, but ones of solidarity in the fight for food justice."

Food insecurity in the US Military

Food insecurity is one of the biggest challenges that our country faces when it comes to fairness to workers. The minimum wage is simply not enough for a worker to support a family, and thus many workers must turn to the SNAP program from the US Department of Agriculture and to food banks for assistance. I've written about this a number of times before.
My friend the blogger Elizabeth of the blog Altered Book Lover wrote  yesterday about a particular instance of food insecurity: that of military families, and I'd like to continue the discussion she started. To put it simply: the pay of many men and women who currently serve in the military is not adequate to support their families:

"A 2019 Military Family Advisory study found that 15.3% of U.S. military families struggle to feed themselves and their families. 12.7% of those families are 'food insecure,' which is, as defined by the U.S. Department of Agriculture (USDA), a lack of consistent access to enough food to live an active, healthy life." (Source: USO) 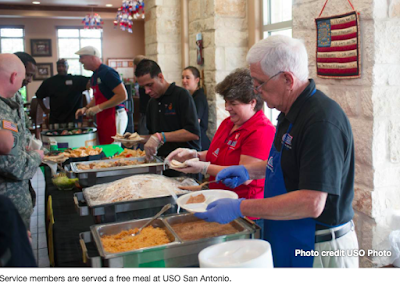 Military families should be qualified for assistance, but they are disadvantaged when they need to apply for government benefits. Because their housing allowance is counted as income, they can't get the same federal benefits as other people with similar incomes, and many of them have had to get help from food banks, the USO (as depicted), and other private sources, or have suffered from hunger.
An article in the Military Times yesterday reports about an effort to remediate the unfairness: "A group of lawmakers are hoping to change that with the Military Hunger Prevention Act, reintroduced Thursday by Sens. Tammy Duckworth, D-Ill., and Marsha Blackburn, R-Tenn.... The law would create a 'basic needs allowance' for low-income military families who would otherwise qualify for the USDA’s Supplemental Nutrition Assistance Program, but for the fact that the program considers basic allowance for housing – used to pay for off-base rent or mortgage – as income when calculating service members’ eligibility."
I hope that this bill will become law, and that other efforts to improve government help for those in need will also be augmented by the current government, which has shown willingness to create new solutions to these long-term problems in our society.
For those of you who live in countries that celebrate workers on May 1, I wish you a good holiday!
Blog post © 2021 mae sander; photos as credited.
Posted by Mae Travels at 3:48 PM

It seems so crazy that we live in seemingly affluent countries and yet there are so many people who live with food insecurity. Thanks for an interesting post.

I personally think it's disgusting that military personnel don't earn enough to live above the poverty line. Why on earth do people sign up to protect their country of they can earn a living? And have poor veteren support when they retire?

I wish I could have written about May 1 as International Workers' Day, but I had other commitments. I watched in horror this morning when the May 1 riots in Paris were covered. This is a sad exclamation point to what could have been a wonderful festive day,

I also saw some of the statistics you shared on the military food insecurity. I wish I had gone into greater detail on my journal page, but I'm thrilled you shared the statistics and of course, this bill that Duckworth and Blackburn sponsored that hopefully passes this time. Thanks for going so much further than I did.

It has been shocking to see the number of folks in my town who have taken to lining up for food at our town's food pantries. There's a little Blessing Box next door to me and people are constantly driving up to it to get food for their families.

I don't know how people who make billions or even millions can live with themselves when there are so many who work hard and yet still suffer.

Thanks for sharing this. It's an important topic and needs to be more widely known.

I never understand why rich people think that poor people would do better if they just worked harder. Oh my. Interesting post here. My Sunday Salon post