Yotam Ottolenghi is a very popular chef/restaurateur and author of 8 cookbooks. He writes a column for the Guardian, and he is proprietor of several dine-in places and food shops in London (though I don't know the current status of these establishments, due to covid).

I find it amazing that Ottolenghi's cookbooks go far beyond the usual offerings of well-known chefs, whose recipes are not always suitable for use in one's home. Normally stocked pantries and normally equipped kitchens often just aren't ready for the recipes that some chefs write. Home cooks often have only two hands, which isn't enough for many restaurant-inspired recipes.

A few months ago, I bought the book Flavor, which is by Ottolenghi and his coauthor Ixta Belfrage. He credits her with supplying many ideas for the book, which I find quite excellent. Maybe the secret of his cookbooks is in fact his many coauthors and collaborators. For example, for the cookbook Sweet, the listed coauthor is Helen Goh. For the cookbook Jerusalem, the listed coauthor is Sami Tamimi, who was also one of the founders of the restaurant Ottolenghi (where I once had a wonderful dinner). Another author who worked with him several times is Tara Wigley. She also contributed to his writing of columns for the Guardian.

I've made several recipes from Flavor, and enjoyed them. Most recently, I made eggplant and ricotta dumplings in tomato sauce, which were very delicious. The garnish of fresh basil leaves and olives is especially nice. If you don't have the cookbook, a very similar recipe appeared in Ottolenghi’s Guardian column a couple of years ago (link). Since the Guardian is British, the word for eggplant is aubergine -- same thing! 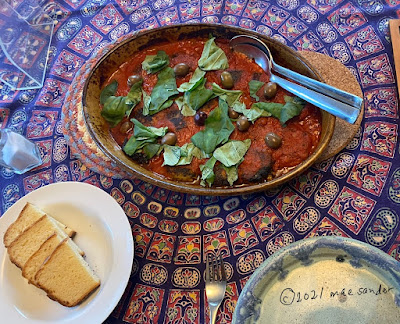 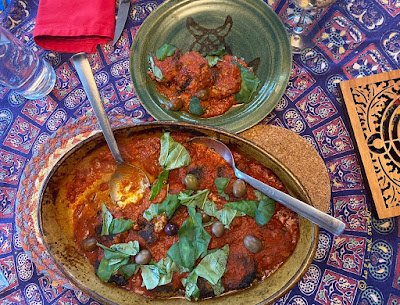 Plenty is still my favourite!

I like the couple of books of his I have. I've mostly used his baking book, and made some wonderful sweets. I should check out more of these as your meal looks delicious.

Thanks for the recommendation. I will give this a try.

Looks great. I had Aubergine but once - it was not a hit... Maybe time to give it another try with this recipe.

I have a couple of cookbooks that appear to have ingredients I've never heard of. I'm glad you pointed that out. This was a fascinating read. I grew eggplants one year and I gave away so many of them. I had a bounty, that's for sure. I certainly enjoyed reading your take on these cookbooks.

We learned aubergine and courgette from shopping when we stayed in London (and we thought they spoke the same language )). Like and use them both often. under any name! We use the NYT cooking site extensively and I have seen this man’s recipes there, but don’t believe either of us has used any of them.

I haven't heard of this chef/author before. Thanks for the introduction.