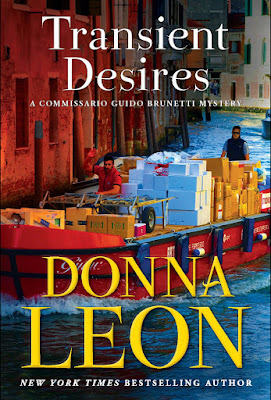 The most recent book about Venetian police officer Guido Brunetti, Transient Desires by Donna Leon, was published in March, 2021. Just as the pandemic was starting in March, 2020, I wrote up an earlier Brunetti novel and said "I suspect she might do a coronavirus in Venice book at some time in the future, but of course none of knows how that's going to turn out, we can only fear it." (here) This newest in the series covers many problems of life in Venice -- but no indication of the pandemic yet.
Transient Desires seems much more contemplative than many of the earlier novels, published between 1992 and last year. In it, Brunetti encounters a number of families, with a variety of relationships among the family members. He constantly attempts to grasp the affections, obligations, and conflicts within them. Although there is some dramatic and risky action in the book, much of Brunetti's energy is dedicated to his efforts to learn how family connections drive some of the despicable criminal actions he is looking for.

Family bonds drive not only the motives of suspected criminals in Brunetti's investigation, but also he must sort out the influence of family ties among government officials to understand how to trust them. He even needs insight into the way that his fellow police officers use family connections to obtain information about the people they are investigating. As Brunetti encounters difficult relationships between generations in these families, he compares them to his own relationship to his two children, a boy who is a student at the local university, and a girl who seems to be in secondary school.*

While most of the books in the series have a great deal of detail about Paola, Brunetti's wife, and about her parents, there is less here about her in this novel, and only the briefest mention of her family: Brunetti is completely absorbed by trying to understand the criminals in the investigation, which is necessary for figuring out what their criminal activity is and how to catch them in the act. When he does relate to his children he is frequently either absorbed in thinking of the suspected crime or is comparing them to the intergenerational connections in his professional activities.

Donna Leon's writings are famous for their detailed descriptions of Venetian cuisine and Paola's wonderful cooking. Like many readers I look forward to imagining the flavor of the wonderful and exotic dishes she cooks for Brunetti. Although a few menus are mentioned in Transient Desires, they are different from the long and loving food descriptions of the earlier books.

Near the very beginning of the book there's a food-related hint of how Brunetti views the changes that are happening to his native Venice, which later result in the crime he investigates. The first food mentioned in the book is a tramezzini, a type of simple sandwich served in a cafe, not a representative of high cuisine:

"He looked into the glass case filled with tramezzini: they’d been made by Sergio [the owner], who still cut them into triangles, while Bamba [the Senagalese employee] preferred rectangles. Maybe an egg and tomato? Bamba returned and gave a brisk swipe at the counter in front of Brunetti."

Later, he orders one of these tramezzini but as he eats, he's lost in thought about the state of the world shown by what he's eating:

"This was indeed fuel, not food: they were good tramezzini, but that did not alter the fact that they were tramezzini, not lunch. And what would follow if we slowly came to accept having a sandwich for lunch?" (p. 15).

"As a form of penance, Brunetti chose to have two tramezzini in one of the bars lined up on the Riva degli Schiavoni; he could bring himself to eat only a bite of each, and could not drink the wine." (p. 42).

Delicious food doesn't distract Brunetti from his preoccupation with the ongoing investigation and its emotionally entangled protagonists. Here's an example where the food is only briefly described, and serves to illuminate the interaction of Brunetti with Paola, his daughter Chiara and his son Raffi:

"Paola had decided to roast a chicken after filling it with a combination of quinoa, rosemary, and thyme. She explained to them that she’d stolen the herbs from the garden of a colleague who had invited her to pick up a book after class.

"‘Stolen’?’ Chiara inquired. Paola glanced across at her daughter. ‘The plants were sitting there, overgrown, neglected, dry – one might even say abandoned – so all I did was trim them. It was an act of liberation.’

"‘You didn’t ask her?’ Chiara insisted. ‘I didn’t notice them until I was leaving,’ Paola said in a less patient voice.

"Chiara, who took a dim view of the eating of meat, took an even dimmer view, it seemed, of the justification of crime. ‘If she’d stopped wearing a bracelet, and you liked it, would you feel the same about “liberating” that?’

"Raffi, who had been following the conversation, smiled, then returned his attention to his chicken leg before his mother could see his expression." (p. 76)

At a later meal, his worries about his case even prevent him from enjoying Paola's cooking or his children's presence:

"Dinner, which Paola and Chiara were just putting on the table when he got home, failed to lift Brunetti’s spirits. There was pumpkin soup, which he loved, and then grilled branzino, but even this historically magic combination did not work its spell, and he sat, listening to what was being said but not engaging in the conversation. Chiara was complaining about a new rule the school was trying to impose upon the students..." (p. 154).

Another time Paola cooks "a risotto with cauliflower and quick-fried veal cutlets, two of his favourites, but he barely finished the risotto and refused her offer of a second cutlet. Nor did he drink a glass of wine, as was his habit at lunch." (p. 101). The loving detail with which Leon has described Paola's cooking in past books just isn't here this time.

While I don't think I have read all 30 of Donna Leon's Venetian detective novels, I've enjoyed quite a few of them. I found this one to have a different vibe from the earlier ones I've read. The sadness for the lost ambience of Venice under the onslaught of huge numbers of tourists and the damage caused by repeated floods is even more depressing than in earlier books. Several times Brunetti discovers that a favorite shop or establishment has closed because the owner can no longer afford the cost of doing business, so it will be replaced by something catering to cruise ship tourists -- he seems to be getting much sadder about this decline. I said much the same thing in 2020, but it's getting more pressing. I guess that in a future book, we might still find out how Brunetti and his colleagues and family survive the pandemic.

*ASIDE: I’ve commented on how Brunetti's two children have aged very little if at all since the first volume of the series, despite the constant introduction of new technology, which is even called out in the novel — for example, he observes the replacement of  "telefonini: the little Nokia ones, before everyone got an iPhone. This was years ago, when people still used them." In earlier books, the telephonini were the phones he and his kids used. (p. 130).

Yesterday's and today's posts are certainly by very good authors. I haven't made it that far into the Brunetti series, but it's nice to see what is coming along when I do. Happy Friday!

Love so much yummy food added to the story.

Once again, I love how you tie everything back to food. It sounds like this one was a big disappointment to you, though. Still, I enjoyed the good review.

The cover photo represents Venice in so many ways. The book sounds depressing, which must have been a reflection of the times. Venice won't be seeing cruise ships like they used to which is a good thing in my opinion.

(Note: I'm very far behind on visiting everyone's blogs, so I'm doing a quick pass through, and will try to catch up later.)

I love this series but haven't gotten to this one yet. I happened to find several in used book stores back in the day so haven't read them in order. I enjoy the food-related aspects of her writing in these books. Her attention to how the tourist presence has changed the Venetian environment was eye-opening for me.

I love this series and the food references. Don't you want to live in Paola's kitchen? this one does sound a bit odd. This is probably the only detective series I know where the characters don't seem to grow much older. I always think if I read these out of order it might not matter so much as it does with Louise Penny or Elly Griffiths or Deborah Crombie or Jacqueline Winspear. It will be curious to see if Leon addresses the pandemic or if she just lets it ride.

it's funny how covid has come into so many tv shows and books now. well, a good plague always makes for good reading and viewing:-)

Each time you write about this series I am tempted but I really don't have time to start a series right now. I am keeping it in mind though