"Parable of the Sower" by Octavia E. Butler 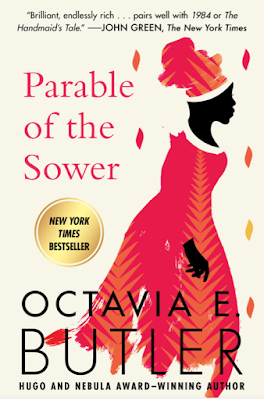 Octavia Butler (1947-2006) is a fascinating author. I have just read her book Parable of the Sower, which was published in 1993, and I will probably read the sequel, Parable of the Talents. The action in the book was in the distant future when Butler wrote it, but now it's in the immediate future, taking place from 2024 to 2027. The setting is California, which has been devastated by drought and unrest.

Obviously the utterly chaotic, desperate, and violent situation in the futurist dystopia is not (yet?) a reality. The predictions of climate disasters, social unrest, completely predatory law enforcement, useless government, shortages of all basics including drinking water, and consequently impoverished populations have a lot of resonance now. Luckily, in real life as I write in 2021, we are still pretty much the same society that we were in the 1990s.

The narrator of the book, a young woman named Lauren, is 15 years old at the start, but highly aware of the precarity of her family's situation. They live in a walled and guarded complex of homes and are constantly invaded by lawless thieves and vandals. Drugs are rampant, especially a drug that makes the addicts love to set fires and watch them. Of course things go from bad to worse. Lauren loses her family and goes on the road, living from hand to mouth, and defending herself and an accumulating group of other refugees.

Lauren has invented a kind of religion, finding a God in nature. She narrates her journey with the idea of expressing her religious thoughts, and it's fairly interesting. It reminds me of the philosophy of Spinoza, finding God in everything and everything in God. She writes:

"Create no images of God. Accept the images that God has provided. They are everywhere, in everything. God is Change— Seed to tree, tree to forest; Rain to river, river to sea; Grubs to bees, bees to swarm. From one, many; from many, one; Forever uniting, growing, dissolving— forever Changing. The universe is God’s self-portrait." (p. 315).

The descriptions of the book are vivid and the action is extremely well presented, which is why I liked it. While life has become primitive, the people know about the rest of the country, and hear of all the other types of disaster such as cholera in Mississippi, drug epidemics in big cities, tornados in the South, a blizzard in the midwest, and a measles epidemic in New Jersey.  There are earthquakes that further destabilize life in California.

Their news sources, however are becoming weaker as their electronic devices break and they definitely can't pay for new ones -- all money goes for basics. And basic human needs are less and less well-met, especially food and above all water, which is more expensive even than food.  Just a few examples, beginning with the narrator's favorite: "acorn bread that was full of dried fruit and nuts." (p. 55). Wheat and other grains have become so expensive that her family uses what grows in the dry California area where they live -- and obtains recipes from a book of American Indian lore. Inside their walled compound they also have orange and lemon trees and a rabbit warren which provides meat and skins. However, "Food prices are insane, always going up, never down. Everyone complains about them." (p. 80).

Shopping is dangerous and difficult, with many dishonest merchants. At a reliable one:

“'Shop in peace,' the guard said with no hint of a smile.

"I bought salt, a small tube of honey, and the cheapest of dried foods—oats, fruit, nuts, bean flour, lentils, plus a little dried beef—all that I thought Zahra and I could carry. And I bought more water and a few odd items: water purification tablets—just in case—and sun blocker, which even Zahra and I would need, some stuff for insect bites, and an ointment Dad used for muscle aches." (p. 174).

"Cold camps are safer than cheery campfires. Yet tonight we cleared some ground, dug into a hillside, and made a small fire in the hollow. There we cooked some of my acorn meal with nuts and fruit. It was wonderful. Soon we’ll run out of it and we’ll have to survive on beans, cornmeal, oats—expensive stuff from stores. Acorns are home-food, and home is gone."  (p. 180).

"We had beans cooked with bits of dried meat, tomatoes, peppers, and onions. It was Sunday. There were public firepits in the park, and we had plenty of time. We even had a little wheat-flour bread and the baby had real baby food with his milk instead of mashed or mother-chewed bits of whatever we were eating." (p. 220).

All in all, I liked this book, and found the author's predictions of future breakdown in society to be quite interesting. And I'm really glad we haven't deteriorated that far: the risk is far from over. Maybe we'll suffer this fate after all. I hope not. I haven't read any criticism or other reviews of this classic, so someone has probably already said all the things I have said here.

I wrote about Butler's novel Kindred when I read it last July (link). This post © 2021 mae sander.

I know this author's name but she wasn't who I thought. (I looked her up as I was trying to figure out why I know her name.) I'm not one who really likes dystopia novels, but she certainly has written a lot and gets great reviews. Thanks for sharing Mae.

How utterly sad to think future generations could live like that.

Scary she "knew" so early on what mankind likely will be up to.
I hope she is wrong and we manage to live with nature and each other in peace.

What bothers me is that some people are living very much like that today, sans the water purification tablets. It's sad that some people don't have money for food or access to drinking water. This sounds like a great tale. I enjoyed the review, too.

Or perhaps Mother Nature will thin out our herd by sending plagues, fires, and flood. Oh wait...

I'm glad to read your thoughts about this book, Mae. I've got it on my Kindle, and I've been thinking about reading it.

That’s interesting she could almost predict the future, sounds like a good book. Better than the run I’ve had on some lately!

This sounds fascinating! I have added it to my wish list at the library!

this book is really good