Strange Memories from a Strange Book

"I wonder where memories go. In fact a memory really can’t be lost. All it can do is wilt, gently wither, go bad, fade in tender agony, but never be lost. There is no land of lost memories. There is no cemetery of banished memories, not a single one, not even for the most porous, the most debilitated. There is no ossuary, no funeral home where their remains can be laid. Maybe because deep down a memory can never die. Not really." --Chloé Delaume. Not a Clue: A Novel, Kindle Locations 1108-1110).

"That’s all memory is, a row of awful cesspools, sluggish places of death, a picture tacked up behind every door, a door for every period, one picture per calendar, and memories in the middle, memories are dead moments..."  (Kindle Locations 914-916). 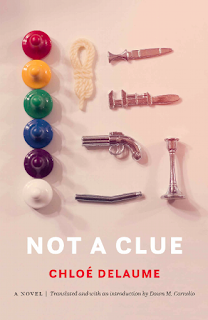 Not a Clue by Chloé Delaume, which was published in 2004, is a very unusual work of fiction, very challenging to read. The chapters consist of a succession of monologues from mad people in the Hopital Sainte-Anne in Paris with occasional interleaved text by a self-identified "omnicient narratrix" and other odd bits.

If you have ever played the board game "Clue" you will recognize the playing pieces on the book cover: the six tokens that represent the players and the six weapons: rope, knife, gun, wrench, candlestick, and lead pipe. The rooms of the hospital, where the patients tell their stories, correspond to rooms on the Clue game board, though the connections, I find, are a little baffling.

When I read about the author's unconventional approach to mystery writing, I thought it would be fun to read. When I learned that the author's literary predecessors were the group Oulipo I was even more interested, though I realized that it would undoubtedly be very difficult to read this book! Never would I dare to try reading it in French! I was challenged enough by translated works of "potential literature," overwhelmed by Life: A User's Manual, charmed by Zazie in the Métro, and so on with the works of the Oulipo writers, what would happen with this one? 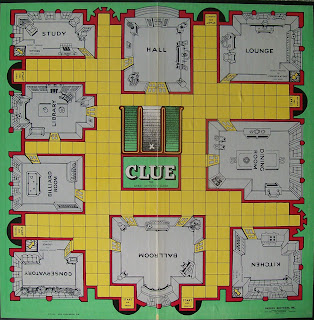 Not a Clue -- a book about memory and its unreliable of ephemeral nature -- created all kinds of memories as I read. First, my childhood memories of playing games of Clue with the kids in my neighborhood. Memories of a variety of French experimental literary creations, read over the years. Memories of experiences described in the book, like changing from one Paris Metro line to another. Memories of my happen-stance visits to the Hôpital Sainte-Anne in Paris where the action takes place. At this moment in time, in the year 2020, memories of exotic locations or social interactions are all I or anyone else can have, being deprived by the coronavirus of direct experiences outside a very limited sphere. Weird, no?


It's pretty funny that this book should be so full of memories for me, since so many of the characters who write little self-portraits are in the mental hospital because they have amnesia of some sort. During one of our long stays in Paris I had to go through the hospital gate shown in the photo once per month to pay our rent. The woman who owned our rental apartment required payment in cash to facilitate her tax evasion, but we never acknowledged this directly. She herself lived in a lovely apartment inside the hospital compound, where her husband worked as a psychiatrist and administrator.

Whenever I entered the hospital grounds, I felt very uneasy because my French wasn't very good. I was frightened that my presence would be questioned by some authority, that I would answer inappropriately, and thus I would be taken for a mad person who belonged there.  Could I explain myself convincingly? My real purpose was making a business call, but I had to pretend it was a social call. Having our whole month's rent in cash in my pocket also made me edgy, especially during my trip on the metro. When I arrived, my landlady would put the cash in a sugar bowl and then offer me a cup of tea.

My own memory makes me feel kinship to the memory-monologues of the many mad people in the book -- "The post-withdrawal alcoholics living in the 14th arrondissement of Paris who’ve been in my presence in the smoking lounge of the Piera Aulagnier Wing at Sainte-Anne’s for the last eight and a half months," or "Amnesiacs, schizophrenics, psychotics, neurotics, manic-depressives, and so many more," says one character  (Kindle Location 1085-1099).

The mad people in the novel were identified with the six personages of the Clue game, and relevant chapters are labeled with the guesses that Clue players make about the murder that's being solved by playing. The Clue game cards for these personages appeared in an ad I found on e-Bay, offering a vintage Clue set like the one I remember playing. In Not a Clue, the author probably had in mind some later version of the game, but I’m making this review also about my own memories.

You can probably guess the problem with this book. Such an artificial structure in the end makes it seem incoherent — all these different mad people with oddball efforts to forget and to remember. The interspersed observations by their doctors, the digressions by the "narratrix," comments the characters make about being in a book and other "meta" things, and so on follow the lines of certain 20th century literary forms. "I have other plans than being part of this pathetic book, you know." says one character. (Kindle Location 3665).

In my judgement, the book is a curiosity, but not very readable. Liking it would require some real mental gymnastics, as far as I’m concerned.

It does sound interesting, yet complicated.
I prefer not to read it, I once was by myself in an old,abandoned asylum whilst my flatmates tried to get in. The trouble of being the smallest... you go first, hop.
Now it´s a nice hotel, back then still those dark-green walls...

I'd rather play with my tea set in the garden than read a "strange book"! LOL
Thank you for visiting! Enjoy your week!

That sounds like a complicated book.
At the moment I’m in a mood of reading lighthearted books. No mental gymnastics. LOL 😂

I'm amazed you read it to the end. Thanks for sharing your memories of Paris. It's one of my favourite cities in the world.

Well done on making it through. It might have been challenging, even odd, but I love that it brought you some memories and it told me a little about you and your time in France so long ago. It's a wonderful story.

I have a Midsomer Murders Cluedo game, which I assume is sort of Clue but I haven't found anyone who wants to play it with me. (Well, I did, but I had to leave Canada before we got around to it!) It'll happen!

oh dear nope this does not sound like my cup of tea at all:)

A very thorough post on food, Mae. I wish there were street markets here like there are in France. There may be a farm near Nashville where I could buy some produce, but I don’t know any, or anyone to ask. I do not eat much meat usually but mostly fruits, veggies, cheese and why they call “legume” here – dry beans and such.

So much food is wasted in the US. France is the first country in the world to have passed a law against “gaspillage alimentaire” or food waste. The unsold food has to be given to food kitchens and other associations that give food to the poor and homeless, it is the law. They also have “restaurant du coeur” restaurants of the heart where the poor and homeless can go and eat free. In addition they do not buy food from the US that has been modified. It is so sad that the US for being the richest country still has so many children who don’t get regular meals. Also, I know how surprised Europe is at watching all the lines of cars right now waiting for free food, just like during the Depression. I read that some European groups were trying to organize aid packages to be sent to the US people in those food lines - as is usually being done for 3rd world countries. Times have changed.

I'm not a big fan of Chloé Delaume's writing, and I must confess that I didn't even know it existed. But I really like your account of it, and I even found myself laughing when you told about the episode of the rent brought in cash to Saint Anne's, and about your fear of being taken for a hospital madwoman. I think it was Louis Ferdinand Celine who said "at six years old I already had only memories", and I could make that sentence my own. I am very touched by your knowledge of contemporary French literature, and in particular of Georges Perec, who has greatly enchanted my youth as a reader. Otherwise, far from the oulipo, I recommend a very singular book by the Haitian writer Dany Laferrière called "Pays sans chapeau" which I like very much. Thank you for your passage, and your literary evocations, your taste for good food and subtle recipes, your interest in art and the art of living. It's a pleasure. Your president has so degraded the image and perception of your great country. In any case, I hope you will have the opportunity to come back to Paris, and who knows, perhaps to meet us there?