September was a short and quiet month in the kitchen, with one trip away from home at the beginning and one at the end. We have continued enjoying the last of the plums, peaches, tomatoes, and other late-summer vegetables from local sources, as well as the early apples, but we know we'll soon be settling for not-so-local choices. During the month, I have shared quite a few photos of our simple meals, but I haven't really made anything new or ambitious. Why would I interfere with the taste of a ripe local tomato, for example! 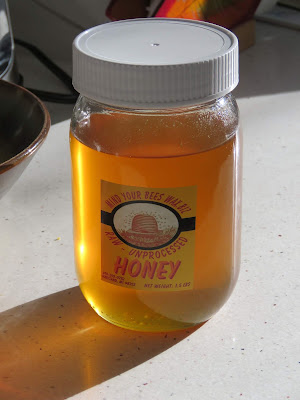 Honey is one great local item we can get here in Michigan. When you buy it from the bee keeper at the Farmers Market you have a much higher level of confidence that it isn't an adulterated horror show from China! 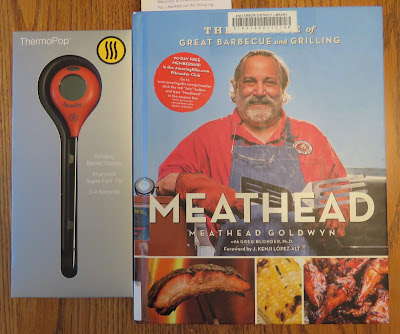 Although some outdoor chefs cook outside all year, we usually store our Weber grill in the winter. As a last farewell this fall: a new library book has been changing Len's ways of using our grill. Meathead by barbecue chef Meathead Goldwyn (published 2016) has offered all sorts of technical and scientific explanations and suggestions about grilling! A ThermoPop thermometer, which very rapidly registers the temperature of meat on the grill was a suggested purchase inspired by the book. It will also be useful for bread baking.

The publisher's description lists a number of issues that are included in Meathead -- and they have not disappointed us:


"With the help of physicist and food scientist Prof. Greg Blonder, PhD, of Boston University, he explains why dry brining is better than wet brining; how marinades really work; why rubs shouldn't have salt in them; the importance of digital thermometers; why searing doesn't seal in juices; how salt penetrates but spices don't; when charcoal beats gas and when gas beats charcoal; how to calibrate and tune a grill or smoker; how to keep fish from sticking; cooking with logs; the strengths and weaknesses of the new pellet cookers; tricks for rotisserie cooking; why cooking whole animals is a bad idea; which grill grates are best; and why beer-can chicken is a waste of good beer and nowhere close to the best way to cook a bird." (source)


Besides preparing fresh produce and watching Len use the grill, most of my food activities in September consisted of reading and TV. I posted about several of the food books I read, but not so much about the new Netflix release of the Great British Baking Show.
We binge-watched all 10 episodes of the new GBBS: as always, in the US we are a year behind, so we were watching the 2017 season. It was the first post-BBC season, with new hosts and judges except for Paul Hollywood, but the formula for the show is so standardized, and the three replacements are so similar to the former ones, that I had a feeling that I was just watching it over and over again. But not a bad feeling, just a feeling. 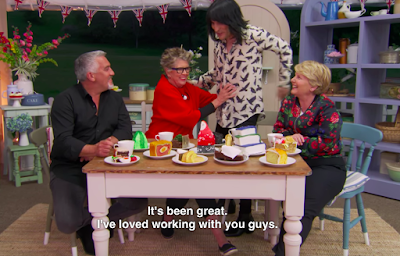 It seemed to make sense to just sit down and watch the whole season -- in fact, we did the last six episodes on a single day from 3 PM to 10 PM with a bit of a break for a quick dinner.

We arrived in Seattle Wednesday, September 26, so we're out of the kitchen and into a new no-cooking environment. By the time this post appears on the blog we should be on an expedition to the Pacific Northwest on a National Geographic ship (assuming all goes as planned). We also started the month with some travel to the east coast -- so the month in the kitchen was really very short.

Instead of a kitchen of our own, here's what we have been experiencing for the last few days of September, to complete this wrap-up:


I have scheduled this post to appear on September 30, and will link to Sherry's "In My Kitchen" blog event if I have internet access from the ship, which we board September 29.
Posted by Mae Travels at 7:00 AM

Have a great trip! I forgot about the GBBS being on Netflix. I loved the old series and am looking forward to watching this one. Glad I'm not the only one who binge watches. :-) Thanks for mentioning it!

hi Mae
thanks so much for joining in with IMK this month even tho you are away. I love the GBBO too, but i watch it on Youtube as i don't have netflix et al. They have done very well with it being on a different tv channel; it seems so similar doesn't it? That prime rib looks enormous. Did you eat it all? yum to crab cakes. have a great trip. cheers sherry x

Mae, I hope you have a wonderful trip. The food looked fantastic so far! Sometimes it's nice to let someone else do the cooking. :) Your prime rib is making me drool -- horseradish sauce on the side, yes? -- and I love the "fish" dinnerware at Duke's. Enjoy!

Sounds like interesting times for you. We are just starting to get into the spring seasonal produce and I hear you about how good fresh seasonal food is served simply. I am astounded at you watching 6 episodes of GBBS back to back - not sure I could do this but I guess you got through it before your trip! I would not feel the need for a book by someone called Meathead but I am intrigued by the geeky bbq info in the publishers blurb so maybe I might find a copy some day and think of you as I browse it. And when you say you had a huge prime rib - I wonder why they don't serve them smaller (half serves?) and not need to tell people they are sold out! Enjoy your travels.

I was so glad Netflix picked up that show! I was in mourning when I learned the old one was done. I do think the new version is the same but that's OK, right? I think I would watch anything, though with British accents. :) I have a green Thermopop that I received years ago for a promotional post. I love it, too!

I had to close my eyes as we are also watching the same season of the GBBO and we have not seen the finals yet :) Hope your travels are keeping you safe!

I can't wait to hear about your trip, hope you are having a wonderful holiday. Seattle is wonderful and I have been to both those restaurants as we usually stay on Lake Union when we visit.

I couldn't agree more about tomatoes, I am already mourning the end of the season.

Lovely things going on in your kitchen never-the-less.

Hope your trip has been great! I was so excited to binge Great British Baking Show on Netflix - I'm totally hooking and have shortlisted several of the technical challenge recipes to try for myself. Local honey is the best - I'm blessed with friends that keep bees and gift us their delicious honey. Happy October! =)

I love the Great British Bake Off (GBBO) which is what it is called in the UK and Australia but sadly, it is relegated to Pay TV in Aus, which we don't have. I was in the UK a couple of months ago on a bank holiday long weekend so topped up on a significant quantity. I laughed at your comment about putting the BBQ away - we are year round users as the weather is very kind in Queensland but we still don't use it as much as we should. Shame on us! Thanks for welcoming me back to IMK.