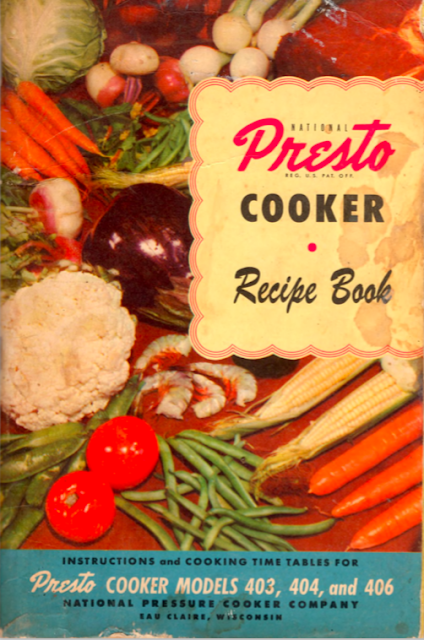 Many bloggers and food publications have been writing about pressure cookers and recipes for using them. Mostly, their pressure cookers are a feature in the latest trendy device, the instant pot. These writers express a lot of surprise and delight -- though there are a few dissenters. Some of the enthusiasts are totally new to pressure cooking, while others have memories of the earlier incarnations of pressure cookers, which were popular in the past.

The Presto Pressure Cooker with a jiggly top that spit out little bursts of steam is the one I most remember from my own childhood. My mother made quite a few dishes in this device, and if memory serves me, she used the appliance manual that's depicted above -- which I conveniently found in facsimile on the website "Hip Cooking."

Unfortunately, my memory of pressure cooking isn't really very nostalgic. Sensations I associate with meals from the pressure cooker:

About fear. Would the pot explode? My mother hovered over it watching the steam indicator. She claimed to be waiting for it to finish cooking so she could put it in the sink and run cold water over it according to the manufacturer's instructions from the beginning of the manual. But I think she was really waiting for the catastrophe: green beans on the ceiling. Or worse.

My mother wasn't a bad cook -- I would say the pressure cooker was kind of a lapse. She made really delicious apple pie, classic tuna salad, tasty mashed potatoes, crisp bacon, scrumptious oven-fried chicken, and so on. We ate artisanal bread from a local Jewish bakery, which meant we enjoyed nice toast for breakfast and great sandwiches: yes, I think we made bacon sandwiches on good Jewish rye bread. We sometimes had high-quality T-bone steak -- though it was served well done. I was a lot happier when she discovered frozen vegetables, which were better than either canned or pressure cooked. We liked lots of the foods that were popular in the fifties but may have gone out of fashion -- like Jello and cake-mix layer cake. I guess that the pressure cooked meals were the worst.

To give you an idea of what she would have been pressure cooking, I selected and copied a few recipes from the manual above. I believe my mother made them pretty much as written. I must ask my sister to forgive me for posting these, as I believe she detested them, while I tolerated them without either enthusiasm or disgust.

Where did the Pressure Cooker come from?

If you ask the Internet this question -- "When was the pressure cooker invented?" -- the answer from the all-knowing Professor Google is:


"In 1679, French physicist Denis Papin, better known for his studies on steam, invented the steam digester in an attempt to reduce the cooking time of food. His airtight cooker used steam pressure to raise the water's boiling point, thus cooking food more quickly."

The National Pressure Cooker Company, maker of Presto cookers, according to Dr. Wikipedia, was founded around the time of the 1939 New York World's Fair where they presented a model similar to the one my mother used in the 1950s. Since then, pressure cookers have been modified and improved several times, mainly with technological safety improvements. Modern ones employ built-in heating elements instead of using the stove top. The current enthusiasts say the new devices also create tastier dishes. I just can't seem to get interested in this extension of my memories.

Ewww, beef stew--but it wasn't tender even if pressure cooked, just greasy and tough. I had a pressure cooker which I used for awhile, until I tried cooking dried beans in it. I DID soak them as long as it said and fill the pot only part full as in the instructions. Nevertheless they exploded. Fortunately, no injuries, and the clean spot on the dingy apartment ceiling was the only one up there. I gave up pressure after that, and don't intend to get an Instapot.

I think that we had one, but it certainly didn't get much use.

Ahh, the fear of the pressure cooker. I can relate. My grandmothers and mother had giant ones for canning. I always remember the warnings about them (even though to my knowledge of family lore, none ever blew up).

I'm doing more of the cooking these days. Succumbing to an online ad, I bought an InstaPot about a year ago and, contrary to my fears of just buying another gadget (e.g. a digital hibachi), I use it three or four times per week for our mostly-vegetarian cuisine. For example, corn-on-the-cob, new potatoes, carrots, and peas can all be cooked in the same batch.
The electronic controls make worrying about time almost irrelevant. That the InstaPot can be used as a slow cooker and also as a rice cooker allowed me to mothball two other appliances.
The pressure cooker successes (and a Wirecutter recommendation) led me to order a Vitamix blender, and buyer's remorse set it almost immediately after Amazon sent the acknowledgement. Fortunately, the Vitamix has also been a success for us. It is a real best, with more horsepower than my first motorcycle, and will turn anything you want into a smoothie.

Thanks for the interesting article. I think I'll skip this trend.

We never had one but you are right about the fear factor. I always heard from the older relatives they would explode and send hot food flying. What you hear as a child sticks and so I have never wanted one. Now everyone at work is urging me to get an Instant Pot!

My mother had a pressure cooker and like you said she was hovering around it because she was worried it would explode. She always told me you have to be very careful with a pressure cooker. I always wondered why she cooked with it. The food wasn't exceptionally good.

I was always afraid of the pressure cooker and I still can't get into this instapot thing! I'll stick with the "old fashioned" methods!

Good post, Mae! Bill would love it if I made beef stew like that. My mom used a pressure cooker/canner many years ago for tomatoes and green beans, etc from the garden. I'm like you, much prefer frozen vegetables to canned. She never used it for anything else that I know of. I threw my Instant Pot into the garbage, truly hated it; very rarely just throw something away but did with that thing. I prefer the traditional methods of cooking.
I'm not surprised about NY and the World's Fair, it's always NY. Leave it to Dr. Wikipedia, he knows everything!

Wonderful post! I definitely remember pressure cookers from the 50s. The fear factor was huge -- one of the reasons why they were a fad for only a handful of years for the average home cook (canners have always used them, I suppose). And yes, the food from them was frequently meh. Frankly, one of the reasons why I have yet to join the instant pot craze. Well, probably the main reason is I don't mind taking time to cook things -- I enjoy the process and get good results. Fun read -- thanks.