"West of the Revolution" 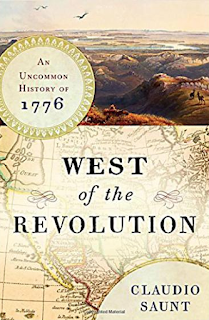 In 1776, as everyone knows, was the starting moment of the American Revolution. Simultaneously:

In the book West of the Revolution: An Uncommon History of 1776 (published 2014), historian Claudio Saunt describes all of these events as well as many more in places like the Mississippi River basin, midwestern Canada, Georgia, and other parts of California. Saunt seems to try to keep modern judgements out of the book, and just to tell the tales of early contacts between the Europeans and the well-established native people. These Europeans were often disastrously unprepared to meet the wilderness. They often would have died of starvation without the assistance of the local inhabitants. Sometimes they encountered hostility and died at the hands of groups who didn't want to be invaded.

I had always assumed that the vast American continent was gifted with vast riches that for the native people were virtually unlimited. Not so, Saunt explains. For example, in the San Francisco Bay Area, scarce resources were a problem for the local Yelamu Indians. Saunt explains:

"Scarce resources had led to a long-term trend of resource intensification in the four millennia before  contact. That is, to support a growing population, native peoples increasingly extracted more calories per square mile and exerted more energy in doing so -- to the point that they had destroyed local breeding grounds for certain birds, overhunted large game, and reduced the population of sea mammals. ...

"Perhaps the surest sign of resource intensification was the dependency on the acorn, as important to Californians as corn was to natives of the Southeast and Southwest. Though acorns are high in fat, oak tree production is sporadic, and toxic tannic acid must be leached out before the nuts are edible, as Spanish soldiers learned from hard-won experience. ... By the time the Spanish laid claim to San Francisco, inhabitants were concentrated in locations where oak trees thrived." (pp. 81-82)

As a result of over-dependence on acorns, the residents of the Bay Area had developed various nutritional deficiency diseases. They engaged in intensive cultivation of gardens and worked hard to extract food from the land. The Spanish introduction of hogs and cattle used their scarce resources, and soon after the take-over, they began to starve. A sad story of violence and extermination followed.

Most of the starvation stories in West of the Revolution are in fact about the Europeans who didn't know how to cope with the rugged American terrain. For example, Domínguez and Escalante came close to starvation as they wandered rather haplessly in the Great Basin. Paiute Indians at first avoided the expedition, but eventually:


"The lost travelers were spared a worse fate when five Paiutes spotted them from atop a mesa. After Escalante and Domínguez approached and 'begged' the Paiutes to guide them to water, the residents took them to an arroyo with two water holes deep within its recesses. The next day, more locals arrived at the camp to sell cactus pear and seeds and furnish them 'vague directions' to a ford on the Colorado. Despite the circumstances of his own party, Escalante was struck by the Paiutes' poverty: they were not horticulturalists and depended on seeds, wild plants, and small game for sustenance." (pp. 110-111)

West of the Revolution definitely takes an unusual point of view in describing history. Although there should have been nothing particularly notable about the year 1776 outside of the small rebellious British part of North America, he makes one see that really a lot was happening right then. Using both modern and antique maps and also explorers' drawings, the book helps one visualize the events and locales. I enjoyed the descriptions of native foods, particularly, learning what the plains Indians ate besides the well-known bison, and much more. As Carolyn Kellogg said in a review in the L.A.Times: "This is a history more terrible than wondrous, a necessary counternarrative to our enlightened Revolution." (source)
Posted by Mae Travels at 9:01 AM

I seem to remember learning that some native people were nomadic - traveling to find resources. This unique perspective on history sounds interesting.

I think your last paragraph is a revealing thought for all key events. We narrow down to a big one -- a war, a revolution. But in parts of any country there is a different life going on.

This sounds like a fascinating book. It's all too easy to assume that the events we're familiar with -- and interested in -- were the center of the universe. Not. :-) Excellent review -- thanks.

Well, you are really going to town this month. I have only read 2 novels this month and haven't had time to even write up reviews.