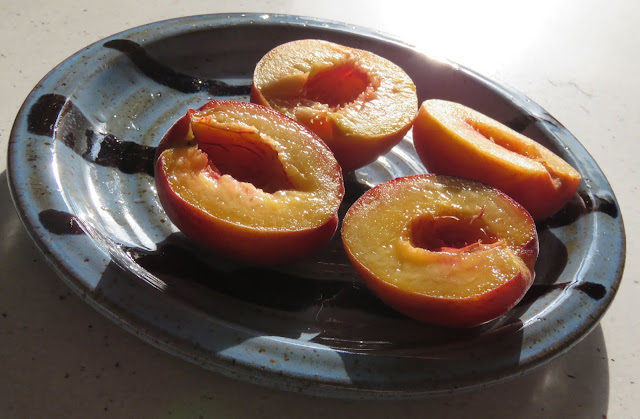 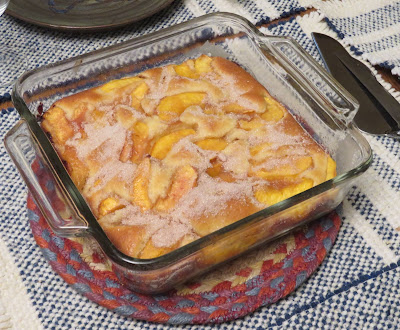 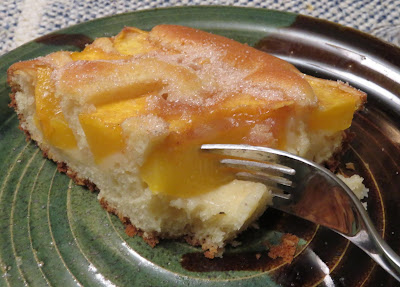 For a brief time, my life is full of peaches. This is wonderful. Since Monday, I have bought 17 ripe Michigan peaches. There are three of them left. Soon peach season will be finished, and I will have to wait almost a year for another chance to eat them or to make peach cake.

Even the book I am reading, The Penguin Book of Japanese Short Stories, seems to be full of peaches. Here is one passage that most wonderfully captures the delight of a peach:


“Sanshirō thanked him and ate a peach. The man seemed to enjoy them very much. He ate several with great abandon and urged Sanshirō to eat more. Sanshirō ate another one. They went on eating, and soon the two of them were talking like old friends.

“The man remarked that he could well understand why the Taoists had chosen the peach as the fruit of immortality. Mountain ascetics were supposed to live forever on some ethereal essence, and peaches probably came closer to that than anything else. They had a mystifying sort of taste. The stone was interesting too, with its crude shape and all those holes. Sanshirō had never heard this particular view before. Here was a man who said some pretty inane things, he decided. The man spoke of the poet Shiki’s great liking for fruit. His appetite for it was enormous. On one occasion he ate sixteen large persimmons without ill effect. He himself could never match Shiki, the man concluded.” (Natsume Sōseki, “Sanshirō,” p. 87)

This passage from “Sanshirō” seems pretty self-explanatory, without any context needed. In contrast, the story "Peaches" is a bit more vexing: in it the narrator relates a vivid memory about buying peaches with his mother and carrying them home in a pram which he, the author, had used as an infant. The entire short story is concerned with trying to understand the memory, which seems more and more difficult for the narrator to place and verify:


“My mother had taken me along to the neighbouring town that night to lay in a stock of peaches at an orchard or some such place. She could get better ones than at the local greengrocer’s, and they would be fresh picked. It was probably worth making a special trip and buying enough to fill the pram.

“Peaches. Fruit like pure, sweet nectar –nothing else. Easily bruised, quick to spoil. And each one heavy, almost unnervingly so. Filled with several dozen of these heavy peaches, the pram must have been more difficult to push than if it had held a live baby. And like the downy skin of a newborn, each could be scuffed and bruised in an instant if my mother did not push the pram slowly and carefully.” (Abe Akira, “Peaches,” p. 191)

The stories in this recently-published anthology include frequent descriptions of food, sometimes quite appetizing, at other times very repellant to the person describing the food as well as to the reader. It's a fascinating look at Japanese literature over the past century or so.

The introduction to this anthology is by Haruki Murakami -- a favorite of mine. This is itself very worth reading: available online here: "Haruki Murakami: A Brief History of Japanese Short Fiction." His description of the story "Peaches," from which I quoted above, is very insightful (of course!) --


"Nothing special happens in 'Peaches' (Momo, 1971). We simply observe the author examining an old memory of his in this contemplative variant of the 'I novel' sometimes known as a 'mental-state novel' (shinkyō shōsetsu). The way the author brings his five senses into play, however, is quite vivid. It’s like watching an old black-and-white film gradually taking on color as the author’s memory assumes concrete shape on the page. The weight and fragrance of the peaches piled into an old pram, the chill of the night air, the croaking of frogs and the creak of the pram’s wheels are all immovable parts of the scene the writer brings back again and again. But then one day he begins to have grave doubts about his memory, and he is thrown into confusion. This fine work is an excellent example of one of the more important forms of Japanese fiction."

I was also impressed by Murakami's summary of another story that I found very compelling for exactly the reasons he states:


"Ohba Minako (1930–2007) was born in Tokyo as the daughter of a naval surgeon and spent her girlhood in Hiroshima Prefecture, where her father was posted. Her experience of the atomic bombing at the age of 14 exposed her to horrific scenes that became a kind of take-off point for her fiction. Her dry, precise style is utterly devoid of ornamentation, and she has been highly praised for the way she uses it to whittle the world down to sharply rendered fragments. In 'The Smile of a Mountain Witch' (Yamauba no bishō, 1976), the ancient Japanese legend of the yamamba or yamauba, a mountain-dwelling hag with supernatural powers, becomes a device for laying bare the life—the often performative life—of a normal contemporary woman. More often than not, the “supernatural beings” perceived by us are nothing more than images of ourselves reflected in a dark mirror. Many women may recognize an aspect of their own lives in the author’s 'mountain witch.' The image of a woman who becomes a hobgoblin in the mountains but is perceived as an ordinary housewife when she lives among people is one of the most important motifs for the feminist Ohba."

Every story in the collection (of which I have read approximately half so far) is splendidly written, and as I think the above quotations suggest, is full of fascinating insights into Japanese literature and culture.
Posted by Mae Travels at 9:55 PM

I went peach crazy in August up north with the best peaches ever. Oh, I miss them! Peach cake sounds really good!

There is nothing like a local peach in season. Our Bucks County peaches are also prolific right now and we have been eating our share. A peach cake would make my husband very happy. Might give it a try while we still have peaches from a nearby farm

I love peach season! Our local farmers say that the season is over. I bought peaches this week but they're not sure there will be any for sale next week. Sob.

Thanks Mae for the very interesting book review. I don't read much Japanese fiction, but will be looking up that one. As you know it's mango season here and it stands in very nicely for peaches, as I don't trust those shipped in.

You are certainly surrounded by peaches this week! Have you ever tried grilling them? We did a few years ago:
http://lakesidemusing.blogspot.com/2014/08/grilled-peaches-with-rosemary-balsamic.html

JoAnn beat me to it. We tried grilling them with a cinnamon sugar last year. So good!

I am now craving peaches but they aren't in season here. cheers from Carole's chatter

It looks like a great book. It makes me think of my favorite Japanese folk tale Momotaro--the "Peach Boy" too. ;-)
I do wish that we had really good and fresh peaches here.

Peach season is way too short but once you get some good juicy peaches, it's a celebration. Love that cake. We bake them too, lots of good desserts with peaches.

You have the most interesting books and reviews.

Michigan peaches are the best imho. I usually buy a bushel and preserve some for the rest of the year but that didn't happen this year.