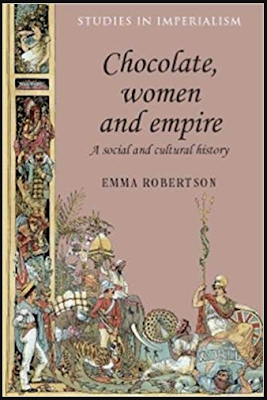 The title Chocolate, Women and Empire: A Social and Cultural History sounded like an outstanding possibility for a book! When I read it, though, I found it a bit disappointing, as it's a very narrow academic study of the former Rowntree chocolate enterprise in York, England. The book, which was originally the PhD thesis of author, Emma Roberson, has two main research sources:

This book, which was originally published in 2009, might be useful as input to a more general study of women in industry, of chocolate making, or something else. It had a few interesting bits, especially about the way chocolate was advertised to women and to men who wanted to impress women. But no big thing to say. And it's kind of fuzzy about time -- it jumps around in the 20th century before 1988 in England, but discusses life in Africa in around the year 2000. Only on the last couple of pages does the author acknowledge that Rowntree was acquired by Nestle in 1988 and thus completely changed.

What a shame this didn't live up to initial hopes - the title intrigued me too!

So many books and so little time. It can be very disappointing when you are looking forward to a good read and it's not.

That title sounds great. Too bad it was disappointing.