"The House in Smyrna" 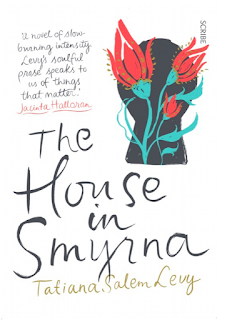 Tatiana Salem Levy is a Brazilian writer and journalist who lives in Rio de Janeiro and Lisbon. Her novel The House in Smyrna puzzled me! It won the São Paulo Prize for Literature for best debut novel. It's widely translated and widely praised. I enjoyed it somewhat, but in the last analysis, I don't feel as if I understood it.

Long passages in the novel seem to be really happening to the narrator, but then suddenly they turn out to be her imagination. Or don't!

Sometimes she says she's paralyzed, unable to walk or leave her room. Sometimes she speaks in the first person as herself, sometimes she speaks as her mother, or imagines conversations with one person or another. She can't speak Turkish, but when she is (or imagines herself to be) in Istanbul she suddenly becomes able to talk to people. Then she goes to Smyrna searching for her grandfather's old house, and can't talk to her cousins, who all speak in Ladino. She has long erotic encounters with a boyfriend, but they are often interrupted by thoughts, or maybe just descriptions, of other people and places. I've read books like this, but not so over-the-top!

I do like some of the author's imaginative descriptions about her past, about her grandfather's early life and departure from Smyrna to Brazil, about her parents' ordeal in hiding from the Brazilian dictatorship and their exile to Portugal where she was born. But in the end, I craved clarity -- more clarity in the writing, even if the character herself was confused or demented.

Here's a sample of a passage that I enjoyed -- and could follow!


"Last night I had a strange dream. A nightmare. I arrived at my grandfather’s house in Turkey, a big, beautiful, very old house with ornate walls, like an embroidered dress. ...

"Suddenly, I heard a loud creak. It was the door opening. A man of about my father’s age appeared, inviting me in. It’s here, come inside, come into your house. I was surprised. Why was this man speaking Portuguese? Come, he said again. When I entered, the house was full of people, young and old, and they all had something familiar about them. The men were wearing kippahs, and most — but not all — of the women had white scarves draped over their shoulders. They surrounded me, hugging me, welcoming me: This is your home, they said. The table was laden with bread, honey, apples, matzah, wine, boyos, cheese, bourekas, and almonds. Come, take a seat, we’ve made you some treats.

"I wasn’t hungry, but the smell was so inviting that I couldn’t resist. I started with the cheese and the eggplant bourekas. But I soon realised that I was the only one eating; in fact, I was the only one sitting at the table. As I ate, they all just stood there watching me, as if I were a strange animal, an exotic jungle creature. I stopped chewing and looked for a face that I recognised. I was afraid. They all noticed and began to laugh. I raced to the door, wanting out, certain that I was in the wrong house. Then I heard a deep voice say: This is your family! I tried to open the door, but it was locked again and now I had no key at all. The laughter grew louder and louder, as I screamed: Where’s the key?

And another I liked, though I don't know if she was really in Istanbul or just imagining that she was there:


"I was ambling along in Istanbul’s scalding heat when I came across a cucumber stall. An elderly man was skilfully peeling them and selling each one for a few cents. Small, medium, and large cucumbers. Whole, with nothing but salt. I was amazed — it was the first time I’d seen anything like it. At the same time, nothing could have been more familiar: salted cucumbers, to be eaten as rabbits eat carrots in cartoons. When I was a girl, I refused to eat lunch or dinner without first having a cucumber, whole, with salt." (Kindle Locations 649-652).

It's good to get out of my comfort zone, and read an unusual author. I've read a few other Brazilian works of fiction, especially several novels by Jorge Amado, Moacyr Scliar, and Clarice Lispector. I should read more of them!
Posted by Mae Travels at 10:39 AM

That sounds like it may be hard to keep straight. I haven;'t ever read a Brazilian author. This sounds like enough to get you interested but I would probably find it difficult to explain the plot.

i'm afraid this sort of stuff bores me senseless. this kind of book i mean:) i just hate not knowing whether the narrator is talking or if a scene is real or a dream or whatever. it just drives me bonkers! I recently read a japanese best seller and i thought it was shockingly bad. who can tell? cheers sherry x

I think I'll pass on this one. Thanks for the review.

Well, it does sound interesting in the way of an old Chinese curse: "May you have an interesting life." I'm more into things that are understandable, with a plot line of some sort. Sourdough was wild and a bit wacky, but quite fun, with a beginning, a middle and an end (sort of).