"Eight Flavors" in My Kitchen 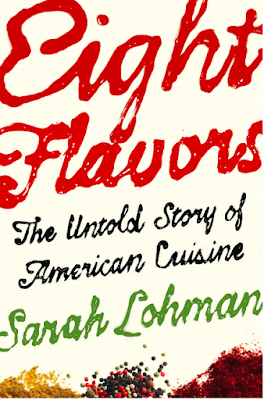 "The American kitchen is not static; it’s cumulative, and it evolves. Ten years ago, I had not heard of Sriracha, and now it is in every refrigerator I open (at least, those refrigerators stocked by millennials). And in the next decade, or the next century, our cuisine will continue to change. Which means a new flavor will earn a permanent place in Americans’ hearts and stomachs." Eight Flavors: The Untold Story of American Cuisine (pp. 221-222).

Author Sarah Lohman identifies herself as a historic gastronomist: that is, she explores the way that cooks worked in the past, and re-creates old recipes. The eight flavors in the title of her book provide a route into American cooking from Colonial times (when black pepper dominated both sweet and savory recipes) to the present, when we retain the earlier flavors but continue to add new ones. Specifically, Lohman describes how Sriracha, a hot sauce of southeast Asian origin and California manufacture, has spread throughout our kitchens.

In every chapter of this book, I learned new things about the flavor featured there. As illustrated in my photo, I use every one of these flavors in my own cooking -- some more than others. Especially interesting was the idea that wartime exposure to the foods of a region often results in flavors being brought back to the soldiers' home country. Is Sriracha partly due to experience in the Vietnam war? Well, maybe!

A few things I found especially interesting:
Lohman's discussions of food history can be very intriguing. I was familiar with some of the history, such as the evolution of Italian-American food from the variety of Italian regional cuisines belonging to immigrants; the evolution of Chinese-American foods and thus the popularity of soy sauce; and the invention of chili powder and the role of the "Chili Queens" who sold a variety of Mexican street foods and thus popularized Tex-Mex cuisine. (I read about these areas in Hasia Diner's Hungering for America; Gustavo Arellano's Taco USA; and Haiming Liu's From Canton Restaurant to Panda Express -- blogged here, here, and here.)

My kitchen is pretty quiet these days, as I recently returned from a long trip and I haven't started cooking very actively to date. Reading this book gave me an opportunity to present a feature of my kitchen for the blogging event titled "In My Kitchen This Month," hosted by blogger Sherry. Quite a few very interesting posts have already been added to the April list!

Update, June 20, 2018. My culinary book club read this as our June selection. Everyone seemed to enjoy it quite a bit. Favorite sections included the one on vanilla, on black pepper, and on Sriracha.

thanks for joining in Mae. Much appreciated. this book sounds fascinating. i find food history which of course becomes social history a fascinating field of research. so interesting how food has travelled and changed and been adapted over the centuries. cheers S x

That book does sound intriguing - rosewater a more common flavor in sweets than vanilla!?! I wonder what my chocolate chip cookies would be like if I substituted it. Welcome home from your trip. =)

I found this very interesting, modern cooking is such a melting pot...and it is still happening. I know MSG has been much maligned but my mother was very allergic to it. She was actually made ill. I don't use Maggi seasoning but I certainly use anchovies and fish sauce and other foods with that same umami flavor. Great post, welcome back to your kitchen.

Mae, your reading list was fascinating, as was your summary of Eight Flavors. I've discovered SO many good reads as a result of IMK. (Thank you.) The stories behind the food and recipes add depth and an enhanced appreciation for what's on my dinner plate. So much to learn... YAY! Thanks, too, for being attentive and commenting on my sporadic posts. I haven't cooked much lately either (or with much vigor) -- here's to getting back to what we love doing, xo!

I will look for this at the library.

Sriracha has been a staple in my cooking for at least 10 years as well.

This book sounds very interesting - a great angle on how we developed our flavours that today seem so commonplace. It doesn't seem long ago that sriracha was something I had never heard of but now it is quite everywhere! Enjoy returning to cooking after your trip!

I do enjoy reading about the history of foods and our Cook the Books group got to explore some of it with the Roman novel, Feast of Sorrows. Foodies got to hear more about the umami taste in the past decade, but I think fish sauce is a safer, more historic and perhaps safer alternative for it than MSG.

These are some interesting facts. I will have to seek this one out. Ice cream and this flu could not mix for me. I could not even drink tea with milk. It was clear broth only for me. I think it is now behind me.

Food history is so interesting. Have a great week. Cheers from Carole's Chatter

Very interesting sounding book. I was amazed a few years ago after reading The United States of Arugula by David Kamp just how many things we take for granted. I was unaware that olive oil and goat cheese were relatively recent (historically speaking) additions to the American palate. Great review, Mae!

I remember enjoying this book ... food history is always interesting.

Very interesting. I have many of these in my kitchen, too. (I've been on a curry kick lately!) An intriguing sounding book.