Ten Restaurants that Maybe Didn't Change America That Much 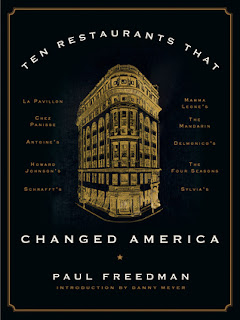 Selection for the next meeting of my culinary book club is Ten Restaurants that Changed America by Paul Freedman. The book is organized in ten chapters -- one for each of the selected restaurants -- with an epilogue. I found the last few chapters and the epilogue to be the best part.

Here is Freedman's explanation, from the epilogue, of why American restaurants didn't particularly adopt the fad called molecular gastronomy. This fad involved scientific experimentation with food substances and flavors for shock value and snobbish appeal, most notably at a Spanish restaurant called elBulli:


"... the American food industry has for ages been dedicated to the transformative scientific manipulation of food. Pringles or cornflakes are in their way as startling as any of those 1,846 dishes invented by elBulli. One reason the United States may not have embraced molecular gastronomy is that we already eat lots of peculiar, non-natural, scientifically manipulated products -- they just aren't crafted, complex, or trendy." (p. 422)

What a wonderful idea! Just think of Coca-Cola, whose sweeteners with or without calories most definitely involve far more elaborate scientific procedures than anything those pompous molecular show-offs do. Making high-fructose corn syrup from ordinary corn syrup requires a whole series of enzymes and heat control. NutraSweet (aspartame) uses chemicals called phenylalanine, methanol, and aspartic acid. Or just think of Cheetos and Velveeta. But I digress.

My favorite chapter of all was the description of The Pavillon French restaurant, a New York icon, which has certainly had its share of coverage in earlier books, magazines, and web sources. Freedman's description is insightful and highly amusing because his focus is on the extreme self-absorbtion and exclusive love of celebrities and "important" customers rather than on the food or atmosphere of the restaurant. He writes:


"Le Pavillon and Henri Soulé raised the standards of fine dining, but also adversely affected the reputation of French restaurants. Snobbery, discrimination, and intimidation were majestically deployed by the imperious if often entertaining Soulé, and these imputed characteristics have damaged the reputation of French cuisine in America ever since. French restaurants aspiring to anything higher than bistro steak-and-frites cooking are now exceptionally rare. It is easier to find Indian vegetarian or Ethiopian food in the United States than an actual French restaurant." (p. 294)

So .... the influence of this restaurant was not to popularize its unarguably fine cuisine, but to demean it and make it totally unpopular! Freedman underscores this point in great and enjoyable detail. How did it change America? It made us safe from the extreme New York style snobbery embodied in the restaurant!

Overall, I wonder: did Freedman make the point that he had selected ten truly influential restaurants? I'm not sure he even tried, with one or two exceptions, especially in the last chapter about Chez Panisse and Alice Waters. Around eight of the very detailed chapters, in fact, are general social history of food combined with the story of one typical restaurant, and he often has trouble sticking to the one he chose. In quite a few of the chapters there's little new material -- I've read many of his major sources so it was clear to me that he offers very little that's new or original. One very good thing: the very carefully selected illustrations, including many restaurant menus and relevant New Yorker covers. Interestingly, in the acknowledgements, credit for this feature is given to "picture-researcher Brian Meyer." (p. 450)

Freedman's chapter on one very high-end Chinese restaurant, The Mandarin, in San Francisco was especially disappointing. As with quite a few other restaurants, he's very impressed by success with rich and famous diners, believing that their approval indicates wide influence. In this chapter, he reiterates the history of the Chinese immigrants to the US pretty much as it's been told by Jennifer 8 Lee in The Fortune Cookie Chronicles and Andrew Coe in Chop Suey. Both of these books demonstrate that the influence of Chinese food in America was from the bottom up -- low-end popular and inexpensive Chinese restaurants really did change America. In a way, it seemed as if he just didn't get it. If The Mandarin was that influential, he wouldn't need to cover more than a century of preliminary popularity of Chinese food, would he?

Far from being influential, most of these restaurants reflected the trends and tastes of the times and cities where they were founded -- mostly New York, which already shows a lack of imagination. Though Freedman shows that they were popular and well-known, he doesn't really demonstrate that they "changed" anything.
Posted by Mae Travels at 10:22 AM