Less is More: Funny in Love, Funny in Food too

Arthur Less, hero (or maybe antihero) of the novel Less, is suffering because he is about to turn 50, his lover is marrying another man, and his most recent novel has been rejected totally by his publisher. A few other things are also bothering him, like his sense of identity as a gay man, especially when one of his trusted confidents tells him he's "a bad gay." The friend elaborates: "It is our duty to show something beautiful from our world. The gay world. But in your books, you make the characters suffer without reward. If I didn’t know better, I’d think you were Republican." (Kindle Locations 1717-1718).

To escape all these negatives, and avoid attending his lover's wedding, Less decides to go around the world, including stays in Mexico, Italy, Berlin, Paris, Morocco, India, and Japan. In each place, he's met by surprisingly ordinary people who want to show him around, to hear about his work, sometimes to fall in love with him, and sometimes to share rather varied and not-necessarily typical meals.

Here are a few passages about the exotic places Less visits, and the unexpected meals he eats (a topic I always check!). I think these illustrate the way author Andrew Seen Grer's novel makes this rather sad character believable. The first example: Arthur Less in Mexico:


"They are met by a woman in a long black dress patterned with hibiscus blossoms, their guide, who leads them to one of Mexico City’s markets,...Their guide stands before a table of candied fruits and asks if anyone has allergies or things they will not or cannot eat. Silence. Less wonders if he should mention make-believe foods like bugs and slimy Lovecraftian sea horrors, but she is already leading them between the stalls. Bitter chocolates wrapped in paper, piled in ziggurats ... alongside the butcher’s area of rabbits and baby goats still wearing their fluffy black-and-white “socks” to prove they are not cats, a long glass butcher’s case that for Arthur Less increases in horrors as he moves along it, such that it seems like a contest of will, one he is sure to fail, but luckily they turn down the fish aisle, where somehow his heart grows colder among the gray speckled bodies of octopuses coiled in ampersands, the unnamable orange fish with great staring eyes and sharp teeth, the beaked parrotfish whose flesh, Less is told, is blue and tastes of lobster... (Kindle Locations 664-674).


"Shades are being opened to let in the bright sun above the heavy clouds. ... Breakfast; they are about to descend into Frankfurt. And he has just taken a hypnotic. A tray is placed before him: a microwaved croissant with frozen butter and jam. A cup of coffee. Well, he will have to push through. Perhaps the coffee will counteract the sedative. You take an upper for a downer, right? This, Less thinks to himself as he tries to butter the bread with its companion chunk of ice, is how drug addicts think." (Kindle Locations 907-912)

Berlin, where he gives lectures in totally awful German (also a source of great amusement):


"Berlin is all around them, the Fernsehturm rising high in the east like the Times Square New Year’s ball, the lights of Charlottenburg Palace glowing faintly in the west, and all around the glorious junkyard of the city...The Currywurst stands where Turks sift sneezing powder onto fried hot dogs, the subterranean bakeries where the same hot dogs are baked into croissants, the raclette stands where Tyroleans scrape melting cheese onto the bread and ham, decorating it with pickles. The markets already setting up in local squares to sell cheap socks, stolen bicycles, and plastic lamps." (Kindle Locations 1476-1485).

Morocco where he travels with old friends and where his fiftieth birthday takes place:


"Would you believe Morocco has a Swiss ski town? ... Less and Zohra are alone, seated in the dark scented bar of the alpine resort, in leather club chairs with glasses of local marc, below a crystal chandelier and before a crystal panorama. They have eaten pigeon pie. Mohammed sits at the bar, drinking an energy drink. Gone is his desert costume; he has changed back into a polo shirt and jeans." (Kindle Locations 2217-2230).

Finally, Arthur Less makes it to Japan, where he has contracted to write reviews of several Kaiseki meals, which all turn out to have the same ingredients, "grilled and simmered and raw plates of butter bean, mugwort, and sea bream." (Kindle Locations 2946-2947). Mostly these highly traditional meals take place in buildings with varying states of charming disrepair; for example the last restaurant where he's trapped by an ancient door and has to break his way out: "The restaurant sits on a rock above the river and is very old and water stained in ways that would delight a painter and trouble a contractor." (Kindle Locations 3001-3002). 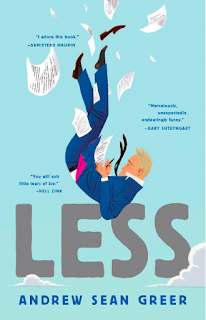 A Pulitzer prize for a comic novel is an unusual occurrence -- the last such winner may be from the 1980s. Less -- which won this year -- is indeed funny, as I tried to show with the food quotes.

"Finally, a comic novel gets a Pulitzer Prize. It’s about time." by Ron Charles in the Washington Post emphasized how rare it is for humor to win the Pulitzer fiction prize -- this article also inspired me to read the book. Charles wrote:


"I see you reaching back to the early 1980s for John Kennedy Toole’s “A Confederacy of Dunces” and Alison Lurie’s “Foreign Affairs,” but their prizes only suggest the duration of this attitude: American critical opinion has been discounting comic novels for decades. (Toole committed suicide thinking his book would never be published.) We celebrate our stand-up comics, we adore our TV sitcoms, and we export our comic movies, but for some reason our funny novels must subsist on a diet of thin praise."

As I read Less, I enjoyed every page. None of the adventures of Less really meet the expectations he had for them, but all are laugh-aloud funny to read about. Finally, at a writers' retreat in India (which actually turns out to be a noisy Christian center), and at a resort where he then goes, he decides that his serious novel about the sorrows of an aging gay man named Swift is to be converted into comedy. His revisions are done this way:


"He simply takes a gloomy event in the plot— say, a market owner dying of cancer— and inverts it, having Swift, out of pity, accept seven fragrant rounds of cheese, which he will then have to carry around San Francisco, growing more rank, throughout the rest of the chapter. In the sordid scene in which Swift takes a bag of cocaine to the hotel bathroom, cutting out a line on the counter, Less merely adds a motion-activated hand dryer and— whirr! A blizzard of indignity! All it takes is a pail thrown out a window, an open manhole, a banana peel. 'Are we losers?' Swift asks of his lover at the end of their ruined vacation, and Less gleefully adds the response: 'Well, baby, we sure ain’t winners.' With a joy bordering on sadism, he degloves every humiliation to show its risible lining. What sport! If only one could do this with life!" (Kindle Locations 2614-2620).

And guess what -- as the reader could guess, that's what Greer did with the novel, says the WaPo article:


"Strangely enough, Greer began this comic masterpiece as a very serious novel about being gay and aging. 'But after a year, I just couldn’t do it,' he says from Italy, where he’s currently working. 'It sounds strange, but what I was writing about was so sad to me that I thought the only way to write about this is to make it a funny story. And I found that by making fun of myself, I could actually get closer to real emotion — closer to what I wanted in my more serious books.'"

I think that this novel is so funny because, obviously, the humor is self-deprecating, the novelist is making fun of himself and how he's too darn serious about living, aging, having aging friends, wanting to be famous -- there's even a meta-meta scene where a former lover of Less wins a Pulitzer prize -- how did he know?
Posted by Mae Travels at 4:52 PM

Quite a thorough review! The book sounds interesting and enjoyable- one I would like to read. thanks

You’ve sold me. I’m off to add it to my wish list. Thank you!

I've bookmarked this post to read after I've read the novel. I don't like to know too much before I read.

I just put Less on hold at the library. Can't wait! Thanks for the great review!

I put this one on hold at the library after hearing it won the Pulitzer-glad to know you enjoyed it and it's got good food presence. ;-)

This sounds like a book I would love! Thanks for the good review and recommendation -- I'd not heard of it!

I'm going to share this review with my son. I think he would love this novel.