Wednesday Word of the Day: Graupel 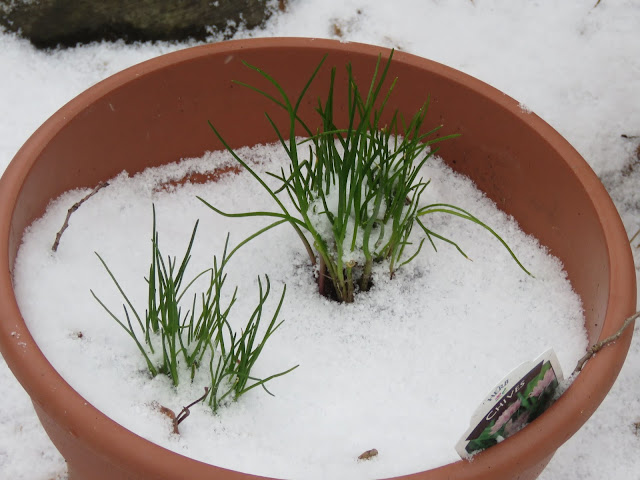 It's snowing again. The chives from last year have managed a timid reappearance in the pot where they were growing last year, only to be snowed on again.

With temperatures just around freezing, we sometimes get unusual forms of snow and ice: for example, sometimes the snow forms small, soft pellets instead of normal flakes. A post from Downtown Home and Garden (an outdoor supply store here in Ann Arbor) noted that there's a name for this type of snow: graupel!

There might be a few such snow pellets showing in the chive pot. Here's a closer look at some of these pellets on the ground and on our deck: 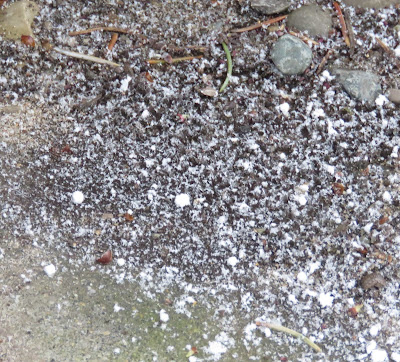 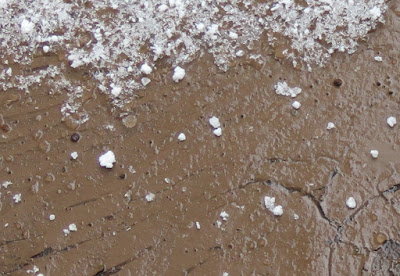 Graupel seems to fall just when it's around freezing. It often melts off quickly, though sometimes I've seen an accumulation of maybe as much as half-an-inch. An article in the Washington Post, titled "Graupel: The wintry precipitation you’ve never heard of"  says: "The National Weather Service defines graupel as small pellets of ice created when super-cooled water droplets coat, or rime, a snowflake. Graupel pellets are cloudy or white — not clear like sleet — and often are mistaken for small hail."

The Post also included this table of names for various types of precipitation: 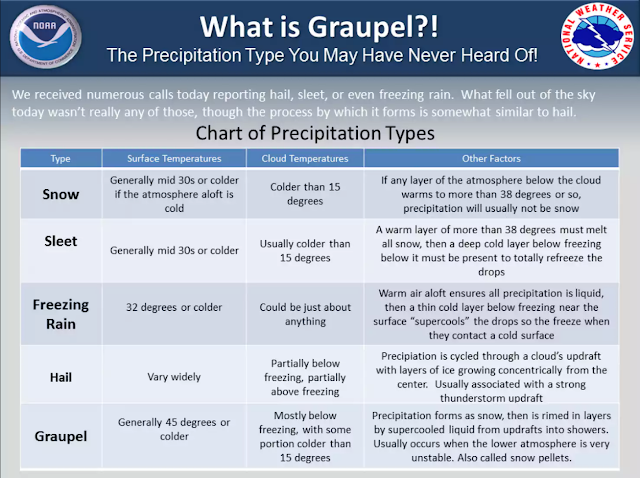 At this point, someone is surely going to mention that English may have several words for snow -- including the obscure graupel -- but the Eskimos have hundreds, if not thousands of words for snow because they know so much more about snow than we do: a myth that just won't die. Linguist Geoffrey K. Pullum has been trying to correct public misconceptions about this matter for years. In 1989 he wrote an essay titled "The Great Eskimo Vocabulary Hoax" (available online here) which was later included in a collection of essays by the same name. He wrote:


"Never does a month (or in all probability a week) go by without yet another publication of the familiar claim about the wondrous richness of the Eskimo conceptual scheme: hundreds of words for different grades and types of snow, a lexicographical winter wonderland, the quintessential demonstration of how primitive minds categorize the world so differently from us. ... The fact is that the myth of the multiple words for snow is based on almost nothing at all. It is a kind of accidentally developed hoax perpetrated by the anthropological linguistics community on itself."


"Among the many depressing things about this credulous transmission and elaboration of a false claim is that even if there were a large number of roots for different snow types in some Arctic language, this would not, objectively, be intellectually interesting; it would be a most mundane and unremarkable fact.

"Horsebreeders have various names for breeds, sizes, and ages of horses; botanists have names for leaf shapes; interior decorators have names for shades of mauve; printers have many different names for different fonts (Caslon, Garamond, Helvetica, Times Roman, and so on), naturally enough. If these obvious truths of specialization are supposed to be interesting facts about language, thought, and culture, then I'm sorry, but include me out."

Despite Pullum's best efforts, references to the supposedly snow-rich Eskimo vocabulary continue to appear, as well as articles about the origins and truth of this notion. In response to one such claim that appeared in 2013, he wrote a post at Language Log where he says of efforts to correct the myth:


"No one will pay attention to such details now. New Scientist and the Washington Post have announced that Boas [the first anthropologist to mention the topic] claimed there were fifty snow lexemes and that new research has now confirmed this; so everyone will believe that, since they wanted to believe it anyway, and they will keep on repeating the same drivel about things-people-have-multiple-words-for that they have so often repeated in the past. A depressing prospect, but it seems inevitable."

Thankfully we don't get much of the white stuff in any form down here. We're supposed to be in the 80s today.

What a terrific post! SO INTERESTING! And I got to learn a new word. I've observed graupel before but had no clue what I was looking at. I just thought it was snowy sleet or something similar. Really fun read -- thanks.

Thanks for the close up picture of today's new word. I'm pretty sure I've seen graupel before as I've spent most of my life in snow country. At least it looks familiar. I like the little chart too. Thanks Mae.

I had NO idea! I was on my way to a reception when this stuff started and I thought "thank goodness it's inside." About 5 last Wednesday. Thanks for this!