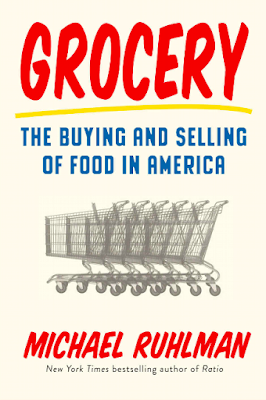 Recent reading: Grocery: The Buying and Selling of Food in America by Michael Ruhlman. Much in it is familiar to habitual readers of food books (like me):
Familiar authors are his frequent sources: Michael Pollan, Marian Nestle, Mark Kurlansky, Eric Schlosser, Calvin Trillin, Richard Wrangham, John McPhee, Michael Moss, Dan Barber, and others -- authors whose books and articles I've read. He has predictable chapters with titles like "No Food is Healthy," "A Few of the Twenty Thousand New Products for Your Consideration," and "The Cooking Animal."

Besides the familiar, however, a lot of the material in the book is different from these previous writers' stories. Refreshingly, the center of his book is Cleveland, Ohio. I'm always annoyed at the New-York-centeredness of so many food books. This is midwestern!

One interesting point: in a medium-size midwestern city -- like Cleveland -- typical American transportation has had a big effect on how people shop:


"One of the under-recognized facts of American real estate development is how our modes of transportation are the fundamental determiners of the way we create our residential and commercial spaces. The advent of the streetcar... brought about the creation of America’s first suburbs— with sidewalks and shopping districts within walking distance.... Spaces that were developed after the automobile became a predominant feature of American life are far from city centers and spread out. It was the automobile, and highways, that led to suburban sprawl. ....

"'From 1948 to 1963 large chains increased their share of the nation’s grocery business from 35 percent to almost half,' writes Harvey Levenstein in Paradox of Plenty. 'As early as 1956, the independent corner grocery store, while still visible, was a relic of the past.'" (pp. 51-52).

Ruhlman presents his analysis of the grocery business through the experience of one family-owned grocery chain in Cleveland, along with his own memories of how his family shopped for food. Its current owners, the Heinen brothers are his main subject. Grocery also sketches the family background of the buisness -- the Heinens' grandfather and father expanded from a small butcher shop to a small market to a chain of supermarkets. A more general outline of the American retail food business supports the history of the Heinens' stores beginning with A&P and a few other 19th century institutions, and continuing up to recent changes in supply and demand for organic produce, natural meat, and similar goods.

While describing the grocery business from the inside, Ruhlman traveled with the Heinen brothers and some of their employees as they evaluated new trends and products at grocery trade shows. He accompanies them on visits to farms and ranches where owners are trying to return to traditional agricultural practices, and learns about the challenges of non-standard meat ranching. Also, Ruhlman discussed alternative health products with a doctor who advises the Heinens on the pills and supplements that they sell.

In particular, I enjoyed the description of touring the small-scale cheese makers of Marin County, California, especially one that I remember visiting years ago: "Marin French Cheese, which bills itself as the oldest continuously operating cheese maker in the country, dating to 1865." (p. 270). When I can find it, I love their Camembert, called "Rouge et Noir"!

Ruhlman gives a summary the economic challenges of the food industry in America in the context of this one local business. He describes the details of how they make money on each section of the store. I enjoyed learning about the issues that particularly concern the local, family-run business. Unfortunately I can't enjoy the results of such efforts: the family chain where I used to shop was sold to Kroger's several years ago, leaving my town, Ann Arbor, with only national chains.

Personal memories of Ruhlman's lifelong experiences grocery shopping -- much of it done at the Heinen family stores create a vivid background to his descriptions. His own grocery-shopping habits contrast with those of his father in the 1960s through the 1980s. His father loved grocery stores and did much of the shopping for his own family during this time. Among many big changes since then: many people now purchase food for their homes at many stores, and don't stay loyal to one main store as was his father's habit. As a result, owners must constantly find new products and presentations to keep customers coming back.

In reading Grocery, I noticed a few annoying errors of fact, a few slips of editing -- like in the passage above, Ruhlman says the streetcars became important "in the first and second decades of the nineteenth century" (p. 51) when he clearly means a time much later when electric power had become available. Or he says "granola doesn’t need much (if any) fat"  (p. 81) which doesn't correspond to average granola nutrition facts: its fat calories go up to 50% of the total. Or he says inaccurately: "Whole Foods and the like had a wide range of organic foods (but you couldn’t find Cheerios there)" (p. 17) -- Whole Foods definitely sells Cheerios, which were made non-GMO in 2014 probably just so that Whole Foods would keep selling them.

But on the whole, I liked Ruhlman's book. Some of my favorite passages deal with the remarkably rapid changes in what shoppers want to get from their shopping and their willingness to shop around, as I mentioned. Constant reaction to change is required by his successful example, Heinen's, and other similar stores. Clearly, flexibility and innovation are required if a market is going to stay competitive in their very low-profit business. The Heinen brothers are aware of factors affecting the producers, not just the consumers -- presentation of these factors keeps Ruhlman's narrative interesting. For example when it comes to organic or naturally raised meat, one of their rancher-suppliers says of them:


"Heinen’s gets it. ...They take the majority of the animal, so we can do what we do and raise beef, and we’re not just pulling tenderloins out. They utilize different beef cuts and that helps make us sustainable. So when people talk about sustainability, it’s the chefs and the retail buyer just as much as it’s us on the ranch utilizing the compost." (pp. 190-191).

Same point made by Dan Barber in The Third Plate, but more convincingly!

So many changes! For example, the implications of hydroponic growing of fruit and vegetables that can be hydroponically grown. Ruhlman lists:

Another big change: demand for ready-to-serve food. The grocery counters where people can buy food that requires no kitchen prep whatsoever are taking up more and more space in markets. From rotisserie chickens to pizza ovens to hot food that's equivalent to take-out from a restaurant, his example family chain and most other grocery stores keep developing recipes and specialties to keep their customers coming back. I was fascinated by the economic implications of selling prepared, ready-to-serve foods: according to the Heinlen brothers, it's impossible to actually make a profit on this department of the store, but it's absolutely necessary to have it!

Ruhlman's book also made me think about how fast the grocery business has been changing even since he published the book last year. Grocery appeared before amazon.com merged with Whole Foods, so he obviously didn't discuss the implications of this merger, which more recent commentators have speculated about quite a lot, and before the meal kit fad which is now going into stores (see my recent post). Who knows what's next?

In a couple of days, I'll be posting a follow-up to this post with observations about food in my kitchen, and how the many issues Ruhlman mentions affect me directly.

Update, July 16, 2018: the follow-up post is Reading "Grocery" in My Kitchen. The Culinary History Reading Group chose Grocery as the July selection.
Posted by Mae Travels at 7:31 AM

My whole family - except me - loves to grocery shop. They check out different grocery stores when they travel. I met an independent grocer from Indiana recently and had a good discussion about the grocery business with him. I think I'd find this book interesting.

Thanks for your thorough review of this book. So many interesting topics and lots of food for thought. :) The cheese-maker description does sound good.

I find it interesting that the author's father and your father did most of the grocery shopping. In my family all the women did the shopping except for my oldest brother in law. He enjoyed doing the shopping.

This sound like a book I would find interesting.

I adore Heinens in Ohio and in Bainbridge, OH (outside of Cleveland) Annie the Wine Goddess knows everything. Ask her a question and info comes pouring out like a fire hose! She goes to Europe to test, sample and buy wines and everything she's recommended rocked!