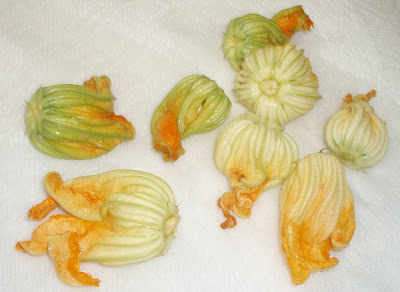 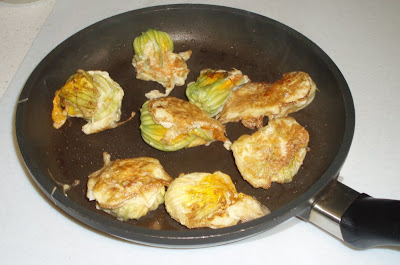 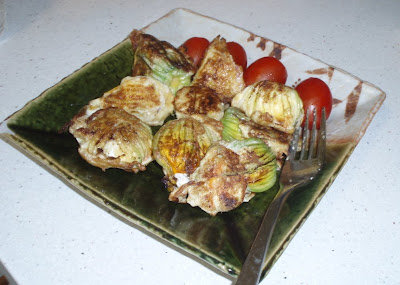 According to today's L.A.Times food section, one seasonal item is the same at southern California farmers' markets and at the one here in Ann Arbor: squash blossoms. Evelyn also bought some from a farmer at the market in Virginia.

I'd never tried them. Said the Times: "Though female zucchini flowers with the little squash still attached are cute, the best ones for cooking are the boys, which have nothing but stem. The problem with the girls is that by the time the squash has cooked through, the delicate flower has turned to rags ... the very best way to cook them is frying."

Their recipe was a little more complicated than what I did, which was to stuff a little piece of goat cheese (also from the market) into each one, dip it in egg, and fry in butter. I must admit that the taste of goat cheese and egg was delicious, but the squash blossom taste was almost indiscernible. The photo in the Times showed somewhat longer blossoms. Maybe that's significant.

Evelyn's response: "I didn't dip mine in egg, and I used a much less flavored cheese called "plain cheese curds" which I also bought at the market, so I tasted the blossoms."
Posted by Mae Travels at 12:15 PM

Hey Mae! Sarah of Una Buona Fourchetta, did almost the same recipe yesterday, and I bought squash blossoms this morning with the idea of the same for dinner tomorrow night. It's certainly that time of year!

I just looked on that blog -- didn't see any info about the squash blossoms -- I guess you saw/heard of it in person! We also had yellow squash yesterday which was far better than the non-local kind.

Nope, I was wrong... it was Shana from The Gastronomical Three. I mentioned both of you in my blog entry today

I've been having some of that yellow squash, too - it's amazing!