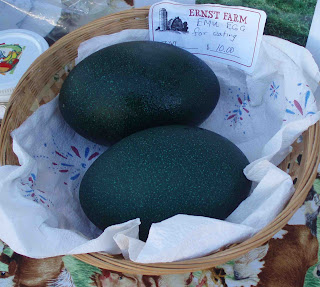 Today at the Farmers Market: leeks, a few flowers, more lettuce, onions, rhubarb, and strawberries. We had brioche and coffee for brekfast at Sweetwaters Cafe in the Kerrytown market adjacent to the Farmers Market. Will I ever have the nerve to try Ernst Farms emu eggs? I don't know, but Mrs. Ernst says the emu lays a couple eggs per week, so maybe I have another chance.

Update -- in answer to Evelyn's question on emu eggs: I think you can do anything with emu eggs that you can do with other eggs. So I think an omelet (emulet?) would be logical. It would just be very big. I think most bird eggs taste pretty much alike, too, just sometimes stronger egg flavor. I read about them in Gourmet's Easter edition.

The emu is the national bird of Australia, but farms across the United States have made emu meat and eggs available to the American market. The eye-catching dark-teal eggs are extremely popular among artists known as "eggers," who carve intricate designs in the shells or use them in jewelry making. Slightly smaller than an ostrich egg, an emu egg provides the equivalent of 10 chicken eggs; an emu egg yolk can be very pale compared to the usual rich yellow of many yolks. The eggs can be found in some specialty markets and can keep, refrigerated, for up to two months.

Here are my leeks before and after preparation. The big job is getting all the dirt out from between the leek leaves. Unfortunately, one of the leeks was rather tough, despite having been steamed for 15 minutes. But they tasted excellent. 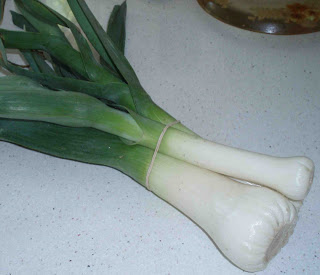 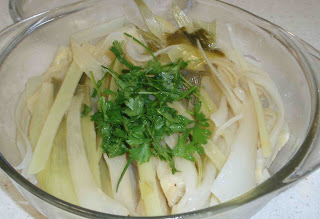 Those are some huge eggs. It looks like one would feed three people. Your farmers market looks much more interesting than the market I go to, with it's emu eggs and all.

We use a lot of Ernst products, but I must say, I've never tried the emu eggs, either. We did get ground emu, but we found the taste kind of gamey and odd. I have friends who just love it, though.