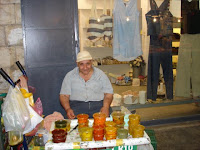 'Amba is a spicy yellow condiment made from pickled mango. Brought to Israel "by the Jews of Iraq, bowls of it are prominently displayed at shawarma and falafel stands." Amba is a link between the Jews of Iraq and their new life in Israel, writes Israeli-Iraqui author Sasson Somekh. Among his many recollections in his memoir Baghdad, Yesterday, this food memory was very vivid.

"The 'amba's pungent odor, one of the distinctive smells of Baghdad, also symbolizes the prominent culinary link between Iraq and the Indian subcontinent," said Somekh. "Even after their arrival in Israel, Iraqi Jews set up small factories and began to produce 'amba -- the main ingredients being slices of mango pickled in a sauce flavored with curry and other sharp spices." (In the photo is a man selling 'amba and other condiments at the Manahe Yehuda market in Jerusalem.)

As a child in Baghdad, the author was especially tempted by 'amba sold near the local movie theater and purchased by mainly Muslim boys to eat on sammoon, a diamond-shaped bread. "I wasn't allowed to join them; my mother warned me over and over not to touch the 'amba sold by street vendors. She insisted that it was teeming with disease-carrying germs -- in any case, why would I want to eat that 'fake contaminated' stuff when we had at home a barrel of the genuine article...? Yet watching the boys... never failed to whet my appetite. And I did disobey my mother on occasion, tasting that forbidden fruit. The heavenly flavor of 'amba on fresh-baked sammoon lingers on my tongue to this day."

I don't remember ever eating 'amba: now I hope I'll have some eventually. However, I suspect that I've tried a bit of this condiment at one or another Israeli falafel stands. I already knew that falafel represent the fusion of various Israeli immigrant groups. Originally, falafel -- deep-fried chick-pea patties -- was a dish of the Egyptian and eastern-Mediterranean Arab groups, but became known as Yemenite falafel when Yemeni street vendors flavored their offering with hawaij -- another spice blend that reflected contact with India. Fascinating!

The 'amba memories appear in Somekh's Baghdad, Yesterday: The Making of an Arab Jew. Somekh is an Israeli poet and writer, born in Baghdad in 1934. His stories describe his childhood and adolescence in Baghdad, life and education for a member of the then-large Jewish community of Iraq, his contact with Arab poets and translators, and of the process of immigration to Israel.

Baghdad, Yesterday: The Making of an Arab Jew is published by Ibis Editions in Jerusalem. The author came from Baghdad to Israel in the early 1950s with the great exodus that reduced the number of Jews in Baghdad to a tiny fraction of its original 120,000 people. Some families had roots going back to the very first Israeli diaspora, the destruction of Solomon's Temple, so the transition for them was not at all easy. Somekh originally published these memoirs of the Baghdad Jewish community in the Israeli paper Haaretz. It's worth reading if you want to know more about another side of Iraqi history.

Notes: I found the photo of an Israeli 'amba seller on an EGullet forum. Quotes are from pages 100-101 of Samekh's book.
Posted by Mae Travels at 12:56 PM