More on the Tomato Recall

It looks as if we should avoid raw tomatoes, especially those sold without the vine attached. Our local Trader Joe's was still selling Romas this morning, though. The implication is that in restaurants or fast-food places, don't eat anything made with fresh tomatoes, like salsa. Some chains have already withdrawn all such foods.

From the L.A.Times today: "The Food and Drug Administration said consumers should avoid raw red plum, red Roma or round red tomatoes, which have been tied to 145 infections reported since mid-April."

From the Washington Post: "Salmonella food poisoning from raw tomatoes has spread to 16 states, causing U.S. health officials to speculate that the outbreak might be nationwide, the Associated Press reports....Consumers are warned not to buy any raw tomatoes except cherry tomatoes, grape tomatoes, tomatoes sold with the vine still attached and homegrown tomatoes, the wire service reported."

So here's my vegetable drawer: 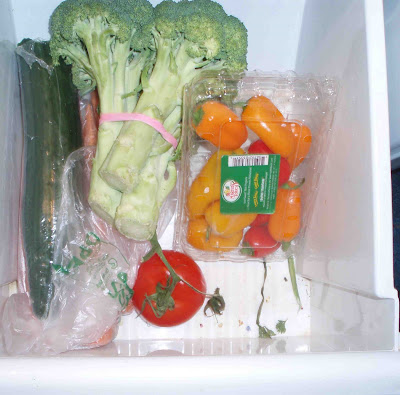 They've also now made a list of places you CAN eat tomatoes from, and it may well be that Trader Joe's gets their stuff from CA, which has been branded "okay". It's truly a mess, though. I'm more concerned about tomatoes that have gone into tomato products.