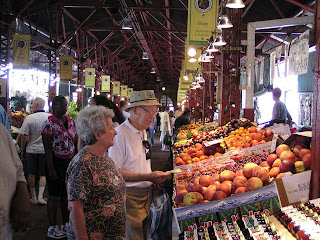 I haven't been to the Soulard Market, which is somewhere in downtown St.Louis, in many years. When we were kids, my father liked Soulard before it was a cool thing to go to markets. Some of us often went with him -- my mother usually didn't go along. The building was more indoors than the Ann Arbor Farmers' Market, with old-fashioned columns and open spaces between them. At one end was an indoor area with small shops that sold regular groceries like meat, candy, and canned goods.

My father liked to talk to the people who worked in the market, and he liked to buy big baskets of tomatoes or peaches or potatoes just like we still buy. 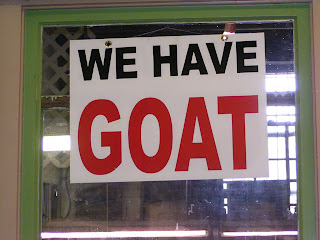 Sometimes he bargained with the sellers, which both he and they enjoyed. Sometimes he asked them about their lives and backgrounds. I think some were immigrants like himself, possibly not far from his age. I remember waiting patiently while he had these conversations.

From these photos, taken by Carol and Nat this week, I can see that many things are still the same -- though I don't recall seeing any goat for sale behind those vaguely familiar glass doors. The stalls in the first picture -- where you can see Ruby and Jay shopping -- look just like the ones I remember, with built-in sloping bins that allow display of fruit and vegetables, different from the market here where farmers have to bring their own tables. 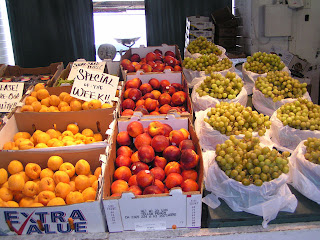 Nat wrote: "the sign in front says it was established in 1779. It currently seems to be a quite practical place, with nice-looking standard produce at quite good prices, and not much exotic or touristy."

The most important feature of Soulard is that it's a market of small retailers, who buy produce at some wholesale market, or from farmers, and who run the shops daily or nearly so. This is a major contrast to the markets throughout Michigan and in Fairfax, which provide a weekly or twice-a-week stall to the actual producers of the goods, and are thus truly local markets. My father often bought imported things like bananas or oranges (like I see in the photo), as well as in-season Illinois peaches or potatoes from somewhere in the midwest. 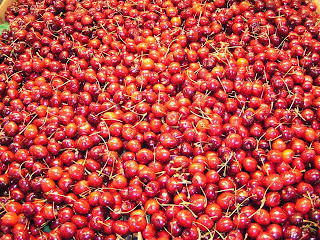 The market in West Lafayette is (I think -- correct me Elaine) a sort of combination. Some farmers sell their local products, some middlemen go to farmers that are further away and bring in baskets of produce from them. I hope Elaine will send me some photos for another market story.
Posted by Mae Travels at 9:27 AM

Loved the photos of Soulard. We have fond memories of our visits there when we lived in St. Louis in 1978-79. We went there often on weekends. Jacob was only 1 1/2 and he loved seeing the live chickens and ducks!